As Washington is preparing for parliamentary elections in Belarus ...

July 12 2016
65
A week before the parliamentary elections in Russia, similar in status Belarusian elections will be held. Belarusian citizens will be able to exercise their right to vote on the election of deputies to the House of Representatives of the National Assembly 11 September 2016. The official website of the Central Election Commission of the Republic of Belarus reports that district election commissions have registered over 420 initiative civilian groups to collect signatures for the nomination of candidates. Signatures are collected in support of such political parties and movements as the Belarusian Popular Front, the Belarusian Left Party “Fair World”, the Communist Party of Belarus, the LDP Belarus, the Belarusian Social Democratic Party, the Belarusian Green Party, the Belarusian Patriotic Party. In general, the pre-election process in the fraternal country is gaining momentum, and party representatives are preparing to fight for deputy mandates.


Against this background, it is difficult not to draw attention to the interest that “main friends” of both Belarusians and Russians - representatives of American political forces show in the Belarusian parliamentary elections. Site The US diplomatic mission in Minsk was literally flooded with information about how Washington is seeking to establish a dialogue with Minsk and even help in overcoming the “Belarusian problems” related to human rights. If yesterday, the Belarusian “problems” with human rights were declared intractable “until the moment of resignation” of Alexander Lukashenko, now Washington’s political environment of Belarus is clearly viewed from a different angle. Under what? To answer this question, you can start to walk on the site of the American embassy mentioned above.

The Belarusian professionals have been invited to take term internships in the United States, where they are invited to take courses under Hubert Humphrey’s program to train a truly wide range of experts: from agricultural and financial professionals to journalism and urban and regional planning management.

The programs offer, on the basis of American grants, an internship in the USA to Belarusian scientists and secondary school teachers, representatives of youth organizations. In particular, for young people, the American embassy in its usual way offers to go through the school of the so-called “youth leadership”. This is absolutely the same “leadership school”, in which the American diplomatic mission in Moscow promoted the internship, when graduates who did not find a job after graduating from secondary special and higher educational institutions were invited to “conversations” with American “guests of Russia”. After such conversations, most of the “youth leaders” clung to the white ribbon and carried the brain to other Facebook users with the call “we need to change the power”.

It was one of the “swamp” elements that the “dear guests” from the USA managed to prepare for the presidential and parliamentary elections in Russia. Unsettled young people, with clearly inflated self-esteem and a low degree of self-realization, were not even persecuted to Bolotnaya - people went by themselves ... To do this, the cookie distributors in the American embassy simply “worked well” to certain members of the metropolitan public that “it’s impossible to live like that and that the power is to blame. ” Then a banal herd instinct and psychological tool worked, on the basis of which a person really believes in the good of the idea “to the ground, and then ...”

There is an opinion that the work of “American partners” in Belarus was not far from the same principles.

Naturally, the Belarusian authorities, who themselves passed through what they call the rudiments of Maidan, cannot fail to understand this. At one time, Alexander Lukashenko, with his hard hand “of the last (at that time) European dictator,” quickly “wrapped flippers” to those who jumped especially vigorously in the center of Minsk, demanding either the resignation of the president and the government, then the recount, or the Belarusian version of Ukrainian “lace panties and weight"...

However, the West decided to play with the Belarusian authorities by other rules. Now not a single talking head in the West calls the President of the Republic of Belarus “the last dictator of Europe”. Moreover, the sanctions are lifted, they are invited to talk to themselves in the residence, to discuss, you know, partnerships ... The Belarusian authorities are visually accepting the game. So, the other day the President of the Republic of Belarus (already in his residence) held a personal meeting with the American Charge d'affaires in Belarus Scott Roland, who was leaving Belarus. 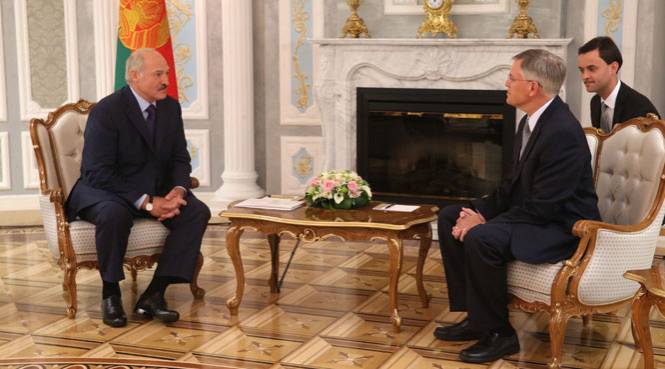 Alexander Lukashenko noted that lately “there has been a positive dynamic in bilateral relations.” Roland added that the countries “strengthen cooperation on regional security issues, and said that the United States is“ one of today's leading investors in the Belarusian economy. ” That's it ... It turns out, already one of the leading! ..

Well, the fact is that the United States will offer “mutually beneficial” conditions, hardly a doubt ... Scott Roland confirmed this (quotation from the official President's site RB):
Washington wanted me to convey to you: we are ready to continue to cooperate with Belarus so that there is a good future. The main thing is that the territorial sovereignty and independence of Belarus be at the highest and strongest level.

Lukashenko:
You can no doubt. Independence and sovereignty for me as President and for the Belarusian people is sacred. This is an icon. We will never agree to be a non-sovereign state, to be dependent on someone.

To say that everything is good in our relations between states will probably not quite look sincere, even diplomatically. But the fact that it is much better than it was and that we are moving in the normal, right direction, probably, you will not deny. With the goodwill of the leadership of the United States, we can do a lot in the near future. I emphasize once again: if this is the goodwill of the United States, we will solve any problems. The basis should be one - sincerity, decency, frankness and trust.

Yeah ... Who, if not Alexander Grigorievich, is aware of how “good” will the leadership of the United States is, and how “sincere and decent” the USA is, ready to kiss even with those who in their plans can mark it with a red cross the knockout game ... It is clear that all these contacts with the Belarusian authorities are an old USA barrel organ, musical and political sketches of which are not very diverse. All the same attempt, at least by a percentage, to try to get into trust and promote their own initiatives even against the background that another electoral or post-election provocation is being prepared behind Lukashenko’s back. It is also clear that the current Belarusian leader himself is seen by the States as a bargaining chip in a much larger game - the game for the next stage of tearing away the fraternal peoples - this time Russian and Belarusian. If it worked in neighboring Ukraine, where, with Yanukovych, at one time, too, they were courteous and promised “sincerely and decently” a lot, then why not try again in the fatherland of Batka? - The main idea of ​​Washington "friends". Moreover, the American printing press for grants is always fast, and the American programs are ready to "form" the "right" Belarusian specialists of the month for 2-3 - right for the elections to the parliament of Belarus.


Naturally, Lukashenka doesn’t bother so much to discourage political vigilance from just one word of the temporary attorney about the US-Belarusian partnership and investment. To bargain is Alexander Grigoryevich, as they say, do not feed with bread. But losing the political scent is clearly not in the character of Lukashenko. And, it seems that American “friends” will be admitted to the “sovereign's body” as a result will be just enough so that they can be taken more by giving less ...

Ctrl Enter
Noticed oshЫbku Highlight text and press. Ctrl + Enter
We are
Two faces of patriotic BelarusBelarusian nationalism is a weapon of the West against Russia
Military Reviewin Yandex News
Military Reviewin Google News
65 comments
Information
Dear reader, to leave comments on the publication, you must sign in.