The Nazis forbade children to sledding 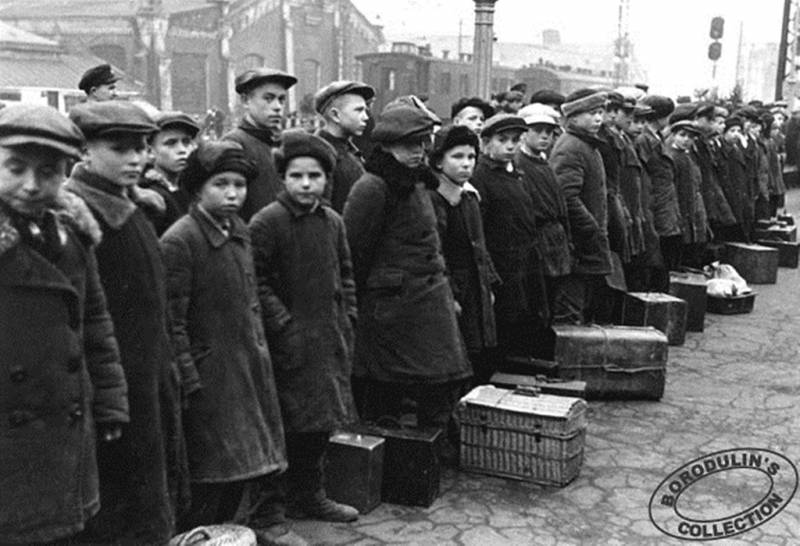 The problem of child neglect and homelessness, aggravated by the outbreak of World War II, worsened in the regions occupied by the Nazi troops, among them the South of Russia and, in particular, the city of Taganrog, where the “new order” operated from October 17 1941 of the year 30 among them August 1943 of the year.

Igor M. Dodonov, a resident of Taganrog, was born in 1929. He recalled: “With the deployment of Nazi troops in the city, difficult times began, my sister and I were left alone, and my mother went to the villages, changing things to eat, to eat. I helped my mother as much as I could. We even had to clean the enemy boots to earn money for food. ” 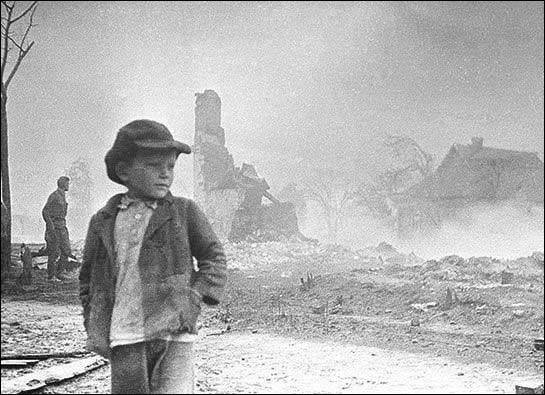 Markets were actually a source of livelihood for the local population. Adolescents could also engage in the sale or exchange of products and industrial goods, often on behalf of their elders. On November 22, the deputy city commander of Taganrog wrote to the field commander's office on the situation of the population: “Hunger and cold significantly affect the mood of the local population. These are dangerous reasons for the emergence of hostile sentiments in the still calm and gullible population of the large city of Taganrog. Only after eliminating the restriction in foodstuffs can there be an opportunity to successfully defeat the parasitic forms of the present distress: usury and speculation on the black market. Currently, unfortunately, the black market still needs to be tolerated. ” Thus, under occupation, speculation was one of the main survival practices for children and their families.

The occupation authorities secretly recognized speculation as a possible way of supporting the urban population, sometimes the only one. However, at the official level she was punished according to the laws of war, until the execution. Children before 14 years trading on the market was prohibited and was considered as one of the forms of unattended pastime.

The order No. 53 of the burgomaster of Taganrog from 20 on April 1942 of the year states: “To combat the neglect of children (aged from 7 to 13 years) who have already attended school, parents and caregivers of children should immediately send their children to school. Children younger than 14 are not allowed to trade in the bazaar or have any other income (shoe cleaning). Children are forbidden to play on the street and sidewalks. The perpetrators will be punished for non-execution or opposition to this order, parents and caregivers of children will be brought to justice. Monitoring the implementation of this order is imposed, besides the teachers, on the police. ”

At the same time, it was difficult to regulate “one hundred percent” the life of a child, banning him with a single resolution to search for not always legitimate sources of food in conditions of hunger and mischief.

In April, seven primary schools opened on 1942, but this did not solve the problem of organizing children's education and leisure. Classes in schools were held irregularly, from time to time, some schools were closed, students were transferred to the rest. In one of the orders of the local commandant's office, the burgomaster of the city of Taganrog on May 20 of 1942 said: “We charge you to immediately close school No. 5. For tactical reasons, this building will be occupied by German troops. ”

In addition, in the autumn-winter period, the school administration faced the problem of fuel shortages, often the temperature in the classes was so low that the ink in the ink bottles froze. Students, as a rule, brought firewood and coal for heating classrooms. A common phenomenon was the termination of classes in cold weather. Such circumstances led to a sharp reduction in the number of students. 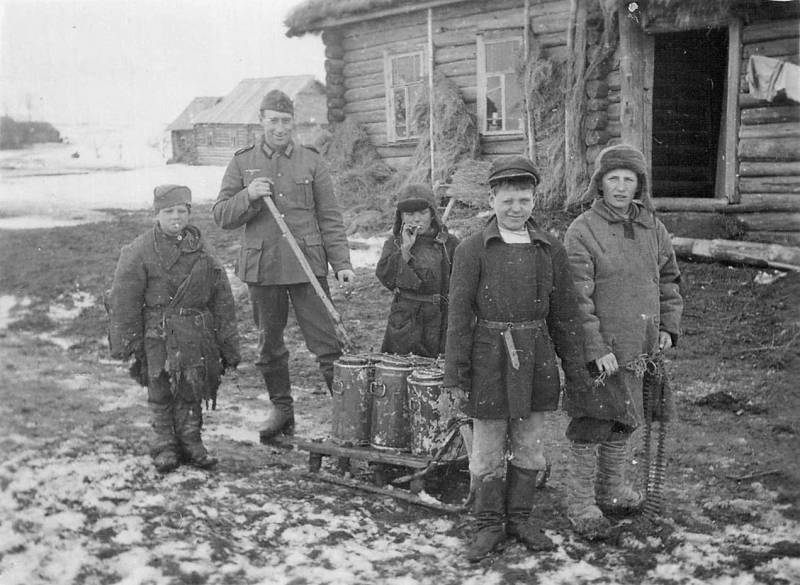 Parents and students did not show the enthusiasm expected by the German authorities for educational policy. By the fall of 1942, about 46 percent of children did not attend school. The lack of desire among local residents to support the initiatives of the occupiers in the field of education can be explained by the following motives. For some families, tuition fees established at first in educational institutions, the lack of opportunities to purchase shoes, clothing and stationery did not allow sending children to study. Others, sabotaging the orders of the occupation authorities about attending school classes, thereby showed passive resistance to the German fascist invaders. 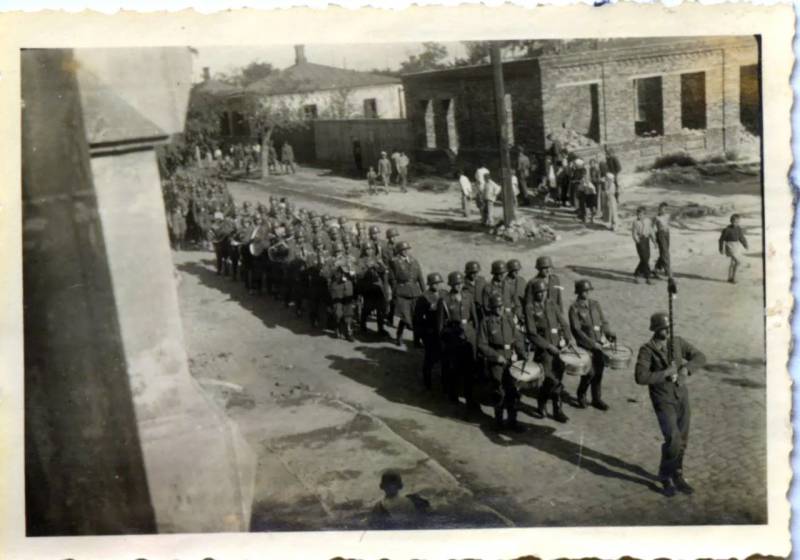 The city authorities have strengthened administrative measures in relation to parents and persons replacing them for not fulfilling their obligations towards children. The burgomaster issued Order No. 94 of November 20 of 1942, “On the fight against child neglect”, which read: “By order of Ortskomendatura, teaching primary school children from 7-8 years to 13 years is compulsory and free. Parents have no reason not to send their children to schools, most of them are engaged in cleaning shoes, speculation in the bazaars, or just hang around. At the Department of Schools of Burgomasterism, posts of special inspectors are established, who together with the police are charged with leading the most decisive struggle against child neglect. Parents are warned that when they find children who are not enrolled in schools, selling at the bazaars or hooligans on the streets, their parents will be held to strict liability and fined. ”

In total, three inspectors to combat child neglect were appointed. In the Taganrog branch of the state archive of the Rostov region, there are diaries that characterize their activities. The content of the diaries has no emotional coloring and corresponds to the daily report on the work done as part of the job description drawn up in the school department.

The functions of the inspector were diverse: it is the solution of the issue of attracting children to educational activities, the elimination of children's speculation, control of adolescents' free time, examination of the living conditions of children in families, solving social problems of childhood. Among the priority duties of an inspector, one should highlight the duty at the city bazaars: “He carried out work at the Kasperovskiy market, deleted children of school age who were selling matches, tobacco, and walking around”.

Inspectors to combat child neglect have worked closely with directors and teachers of existing schools in the issues of involving children in educational activities. “December 11. I visited 6 school. I had a conversation with the teaching staff about the identification of students who maliciously avoided attending school. ”

Systematic explanatory and preventive work was carried out among parents or persons replacing them: “I was at the apartment of the parents of a student of the 6 school and warned the mother about the responsibility she was exposed to if her boy would not go to school anymore.” “February 2 produced the financial situation of Tamara Menkova, who systematically traded on the new market. A family of eight. Children aged 2-5-9-13-18 years. Father works in a factory. Menkova graduated from four classes of elementary school. Mother was read the order number XXUMX.

As a result of a family survey conducted by inspectors, recommendations were issued on the imposition of penalties, and measures were taken to bring children to fascist shelters. “January 7 conducted a survey of the living conditions of citizen S.'s daughter, who was arrested about a month ago. After the arrest of her mother, the girl 11 has remained neglected for years. 8 and 9 in January compiled an act of the need to place the child in a shelter and handing over her mother’s property for safekeeping. ”

The analysis of archival documents shows that in most cases the fact of the material difficulties of the family was only recorded. Assistance to the local population was selective, irregular, primarily to those whose relatives were convicted by the Soviet authorities under article 58 (counter-revolutionary activities).

The working day of the inspectors, judging by the diary entries, was irregular, at any hour of the day and night they could descend and search the families with children: “On January 16, there were fewer children involved in trade at the Kaspersky Bazaar. In the evening, there are pupils skating and sledding, so you have to keep watch and remove children from the bazaar in the evening. ”

The position of the inspector in the fight against child neglect was abolished by 1 in March 1943, and already at the end of the month, the head of the school department stated in a report to the burgomaster that the number of children who cleaned the shoes had increased dramatically.

The defeats of the fascist German forces on the fronts were prerequisites for tightening the occupation regime, curtailing social maneuvering measures and expanding the policy of mass destruction and evacuating the civilian population, including children, to work in Germany and other rear areas. Fortunately, the lists of children attending school were known and it was a simple matter to “calculate” all children living in a family. The Germans got tired of playing ostentatious charity, and they showed their true face. 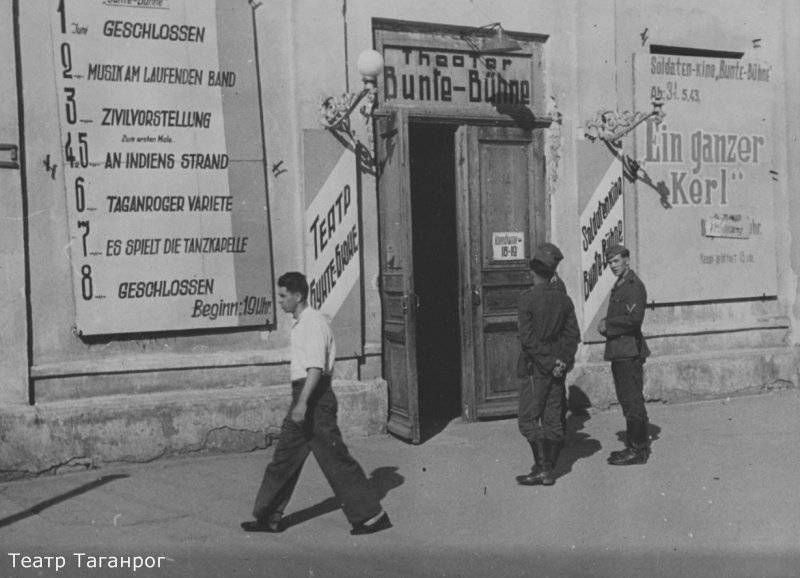 On one of the occupation days in 1943, Igor Dodonov was on the market, where he was captured by German soldiers and taken to his home school. In which children have not been taught for a long time - the Gestapo was located here. Subsequently, Igor Mikhailovich said: “We, six people, were brought there. We think that they will be taken to the Death Beam, will be shot. But we were loaded onto the Black Raven car and taken somewhere. We drove for a long time. It turned out that we were brought to the Dimitrov plant, where we saw many more young guys who, under the supervision of German soldiers, loaded locksmith workbenches to send them to the West. Two days later, we were given a paper on our hands: "Order of labor service." According to it, we were assigned to work in the rear in the frontal zone of the occupied eastern regions. In the case of disobedience, the punishment was borne by the whole family - execution. There was no way out - I went. They sent us to the Vinnitsa region, to work in the workshops. They lived behind barbed wire, they treated us very cruelly there. ”

Ctrl Enter
Noticed oshЫbku Highlight text and press. Ctrl + Enter
We are
From the history of homeless children in RussiaTaganrog underground. Anti-Hitler resistance did not stop the whole occupation
Military Reviewin Yandex News
Military Reviewin Google News
3 comments
Information
Dear reader, to leave comments on the publication, you must sign in.