Syria’s human rights defenders criticized the appointment of the head for the Arab League mission. And the group of observers of the Arab League itself was fiercely fired 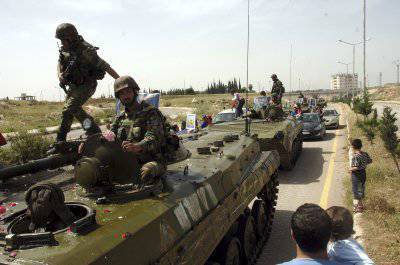 According to Euronews, in Syria, the election of Mustafa ad-Dhabi (Sudanese general) to the post of head of the mission of observers from the Arab League (Arab League) was extremely alarmed and agitated by local human rights activists. They openly stated that in Sudan, the government regularly violated human rights, and this is especially pronounced in the province of Darfur. Also, the Syrians called the appointment of General Ad-Dhabi - a farce.

However, most analysts believe that the Sudanese general is something of a compromise between the Arab League and Bashar Assad (Syrian President).
It is known that General Ad-Dhabi is very close to Omar al-Bashir (Sudanese President), and previously worked in Darfur. In 2008, in July, the International Criminal Court issued an arrest warrant for al-Bashir, charging him with genocide (based on the conflict in Darfur) and allegedly where he carried out ethnic cleansing.

Incidentally, ad-Dhabi, December 28, described the situation in Homs (Syria) as encouraging, and noted that the situation needs to be closely examined.

According to ITAR-TASS, referring to the statement of Adnan Isa al-Khudeir (head of the operational headquarters of the Arab League, which coordinates the monitoring mission in the state), which is currently in Cairo, a group of Arab observers in Syria were shelled. Al-Khudeir commented: "We have not yet established which of the parties is responsible for the incident." The diplomat did not clarify about the victims, and also did not tell the time and place when he happened.

Yesterday it was reported that the Syrian security forces opened fire on demonstrators in the suburbs of Damascus, in the city of Duma. This happened at the very moment when the observers arrived at a visit to one of the administrative buildings located nearby. According to available information, this shooting claimed the lives of 4-s (the participants of the protest rally).

In addition, the head of the operational headquarters also clarified that in the very next few days, they will be joined by the order of 40 observers from the Arab states. And as noted, at least 200 experts should arrive in Syria in total.

According to the "Air Force", in Syria, almost 20 people, by government forces, were victims of violence. In different areas of the state, in the places where representatives of the delegation of observers from the Arab League arrived (the League of Arab States), Syrian citizens also gathered, at which the military opened merciless fire. Initially, observers intended to visit the provinces of Darya, Ham, and Idlib. Since December 25, the delegation of the Arab League has been exercising control over the fact that Syria, nevertheless, fulfills its commitment to stop the suppression of any opposition protests.

There is information that several Arab countries and 2 of European states are jointly involved in the preparation of a plan for the departure of Bashar al-Assad (Syrian President) from his country.

It is worth noting that since March 2011, anti-government protests have not stopped in Syria. With the support of the United States, the opposition categorically demands the resignation of Bashar Assad (the Syrian president). According to the UN, this conflict, to date, has killed more than 5 thousands of people. And human rights activists claim that the death toll is no less than 6 thousands.
Military Reviewin Yandex News
Military Reviewin Yandex Zen
24 comments
Ad