"If Vasil Vasilich does not help, then God has nothing to do"

July 11 2016
5
One of the largest Soviet surgeons, Vasily Vasilyevich Ouspensky, was a man of surprising modesty. Self-promotion, boasting, flattery caused him deep disgust. Meanwhile, the merits of Vasily Vasilyevich can hardly be minimized. It was not without reason that Ouspensky, with his talent, courage, and humanity, became the prototype of the doctor from The Tale of a Real Man by Boris Polevoy. However - in order.

The future doctor was born in a village near Vyatka 20 December 1881 of the year. Since childhood, tasted the bitter orphan bread. Mother, Olga Ivanovna, died shortly after the birth of her son. Father, Dmitry Filimonovich Chuchalov, married again. However, in the new family there was no place for the boy - his stepmother disliked him. Vasily received Vasily Alexandrovich Uspensky, the archpriest of the Izhevsk Cathedral (his wife was a relative of the late Olga Ivanovna). Vasily Alexandrovich took the boy to himself, a few years later he gave to the religious school, then to the Kazan Theological Seminary. However, this did not become the vocation of a young man: Ouspensky was expelled from the seminary for participating in one of the riots. "The instigator and the catcher" - was written in the paper about the dismissal. The sixteen-year-old boy turned out to be practically without means of livelihood (foster parents, indignant at the behavior of Vasily, refused to participate in his fate). Note: by that time, the young man’s father was already quite a wealthy man, he kept his shop and hotel. But Vasily was not going to seek help from anyone. And he was not going to give up. Moreover, he did not refuse the decision to become an educated person. He went to work as a local statistician and worked until late evening. And at night (spent the night in the office), having taken only two or three hours to sleep, the rest of the time was devoted to books - the young man was preparing to pass exams for a course in a classical gymnasium. And got his way! Vasily received a certificate of maturity and entered the University of Kazan in the Faculty of Medicine.

After studying here for several years, he transferred to Moscow and continued his studies there. In those years, a special medical expedition was sent to Persia to fight cholera. Ouspensky became a volunteer. True, they didn’t take it right away: in those years, Vasily was not in good health. However, I could still convince the commission and drove off.

In 1905, he participated in a revolutionary demonstration, for which he was persecuted. He was forced to interrupt his studies in the capital for several years and left for France, and returned to his home country in 1910, and soon received a medical degree. However, the last session at the university turned out to be protracted: Ouspensky went to the Tambov province, where an outbreak of typhoid broke out.

The first years after graduation, Ouspensky worked in Ufa, then in Kostroma. In Tver, he moved to 1918 year. Here was the city hospital - in the former barracks. The conditions are very bad, there is practically no medicine. And the sick, the sick ... And very, very many of the ulcers - the hungry years affected. Ouspensky founded a whole hospital town on the land of Tver and headed it. Unusual performance and talent allowed him to combine practice, administrative work and scientific activities. He became a doctor of medical sciences, bypassing the degree of the candidate.
At the same time, Ouspensky was preparing future surgeons. This training was very different from the courses in the usual sense of the word, although Vasily Vasilyevich had time to teach at the institute. But in the hospital, classes were the purest practice: future doctors immediately plunged into their profession - in the sense in which Vasily Vasilyevich saw this profession. That is, the doctor had to not only diagnose and treat, but follow the nutrition of the sick, rest, be for them a loved one. This is exactly how Ouspensky himself behaved. It's amazing how he found time for everything, if he performed operations every day, and very complex ones. His main "theme" can be called ulcers. Vasily Vasilyevich was a supporter of a sparing operation - gastroenterostomy. Before this operation gave few positive results, doctors preferred to remove the ulcer along with part of the stomach. However, at that time there were no antibiotics and widespread donor services - and the results of the operations were often sad. Therefore Vasily Vasilyevich took the side of another method. Moreover, it was he who “introduced into the periphery” blood transfusions (he conducted his first experiment urgently: Ouspensky saved his colleagues Vasilyev from death). And it went smoothly - people were recovering! By the way, he was the first to use an x-ray in a remote, not metropolitan hospital.

The fame of an unprecedented surgeon swept the country, patients from different cities, often very distant, came to the Tver region. “If Vasil Vasilich does not help, then God has nothing to do!” Said the people.

Of course, a talented surgeon was invited to Moscow many times. But Ouspensky refused. He remained a country doctor.
Did not recognize the ranks. When they called to make an appointment, Vasily Vasilyevich forbade the nurses to ask who “at the other end of the line”. Required to know only the symptoms of the disease and the name of the patient. The same ban imposed on his household.

Here is the case. A girl with a severe ectopic pregnancy was brought to the consultation. They brought doctors from Moscow, as the girl felt very bad. Vasily Vasilyevich just looked at her - and suddenly he shouted: “Rather! Purulent appendicitis! ”The metropolitan doctors were dumbfounded. Then they banned the operation - they did not doubt their diagnosis. Ouspensky picked up the telephone receiver and said: “I am calling the prosecutor. I will give you all a trial, damn you! ”And he operated on it. And he removed the purulent appendicitis, and saved the girl from death.

Another case. They brought a patient with cancer from a distant region, in severe form. There is no hope. The doctor on duty wanted to send the patient back, but Ouspensky did not give. “We're putting it,” he said. - We will not prolong his life, but leave hope. Do you know what it is? The flour of despair is more terrible than any physical torments "...

So, the hospital town grew and developed. At his head, there was still a calm, wise, kind doctor. Another fact: in the mid-thirties, Ouspensky lost his leg as a result of an accident, went on a prosthesis. And imagine, his colleagues practically did not know about it!

He was completely indifferent to things, and his salary was spent mainly on books. “I will die,” he joked, “put them instead of a monument” ...

Vasily Vasilyevich became the chief surgeon of the evacuation hospital (in Kashin). As in previous years, for his patients he was not only a doctor, but also a father and a brother. Often it was possible to see how Vasily Vasilyevich, in minutes, free from operations, came to the sick and fed them with a spoon. Often there was not enough firewood, but the wounded needed warmth. Ouspensky dismantled his barn and dragged him to the hospital literally according to a log. Everybody was surprised: where did the wood come from? And the doctor was silent and smiled. He mastered the case of the electrician and famously repaired the wiring. Although I saw it did not matter, but I read the letters to the soldiers. Everyone said "you." No, almost everyone. But if suddenly he began to “expel” - therefore, he lost respect for that person. He read poems brilliantly and even pretended to act for the wounded, which made him very merry. Once there was a case: a commission arrived at the hospital, and one examiner was perplexed: “You are the head physician, and you behave without keeping a distance at all! Well, how can the wounded believe you if you dance to them? ” Oh, how angry Ouspensky! “I am not a prince, but a sivolapy man! - He snapped. - Son of cantonist and Vyatka petty bourgeoisie! You think that I am not worthy to stand at the head of the hospital - dismiss! ”At this very moment Vasily Vasilyevich“ vykal ”...

During the occupation, the fascists destroyed the new department of the hospital, looted it almost completely. The scientific archive was also destroyed - Ouspensky was going to publish a monograph on the treatment of peptic ulcer. The war took away the “Zemstvo doctor” and son Sergey: he died in the year 1942.

In the 1943 year after Tver’s release, Vasily Vasilyevich restored the surgical department here and created a hospital for children. They were brought here and brought. There were cases, even delivered by plane. More than three thousand saved children's lives ... 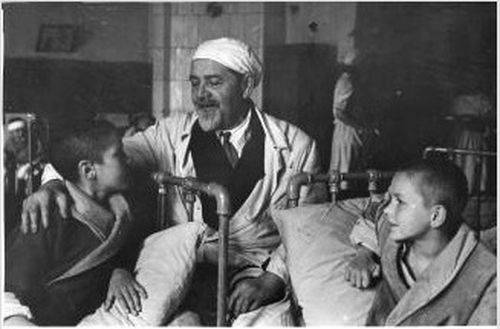 It was Ouspensky who became the prototype of the doctor in The Tale of a Real Man. “This is about Vasily Vasilyevich Ouspensky,” wrote Boris Polevoy in the accompanying note together with the copy sent to Kalinin. “Our great surgeon, whom we, the clans, are proud of.” It was he who served me as the prototype of the image of you. You. in this book. This image is so tightly tied to the prototype that gave birth to it that the artist Zhukov, a great demanding master, however much he beat, demanded in the end that we should go to the original. Go. He made several sketches. And so our Vasily Vasilyevich has already begun living on the book’s illustrations. ” By the way, Lidiya Petrovna Tikhomirova, a student of Uspensky, is a prototype of the main heroine of the Polevoy story “Doctor Vera”.

Almost until the last day of his life, the sick came to Vasily Vasilyevich. He accepted everyone, did not refuse anyone. If there were not enough seats, I put extra beds. In the museum stories Health Tver kept a letter to the collective farmer Sokolov. This is a living example of how sensitive Ospinsky was. “For many years I was tormented by bouts of inhuman pain from an ulcer. I lost my ability to work and, to be honest, I was already preparing to die. Someone advised me to go to you. I remember how I was afraid that I would spend a lot of time only on getting to receive it, because you are the luminary of science. And you accepted me right away. And after the operation, the damned disease fell silent. Now I am completely healthy. Wishing you, dear Vasily Vasilyevich! ”
The doctor received this message shortly before his death (1952 year). “I remember this martyr,” said Vasily Vasilyevich when they read the letters of Sokolov to him. - There was no ulcer - sores. I would like to take another look at it. Did not have time..."

I did not have time ... But he managed to perform more than six thousand operations. And how many lives saved - difficult to count.