The story of "Gyurza": the boats stand, and the money sailed away

July 7 2016
30
The bulk of the financial resources for "comprehensive support of the Naval Forces of Ukraine" will go to an enterprise controlled by Petro Poroshenko, while the raw boats produced by him are still not included in the composition fleet. 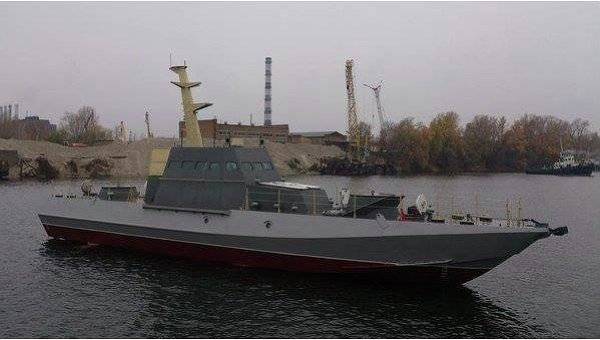 The event is truly significant, if we consider that the previous new warship Corvette "Ternopil" was received by the Navy more than 10 years ago - January 16 2006.

However, as has happened more than once, these words of the president were not entirely in line with reality, so he himself immediately had to add that "the boats are being passed exactly today for combat tests, for setting on arms." This officially confirmed the information that became publicly available in mid-November last year, when in a no less solemn atmosphere on the territory of PJSC “Zavod“ Leninskaya Kuznitsa "these boats were launched into the water. Then some media also rushed to inform that they "went into the Black Sea under their own power, where they would become part of the Navy." However, behind the numerous yellow-blue inflatable balls, they could not hide the absence of not only a power plant on the boats, but practically all udovaniya and weapons, including radar navigation, an integrated system of communication and navigation, detection sensors and laser irradiation optical-electronic fire control system. 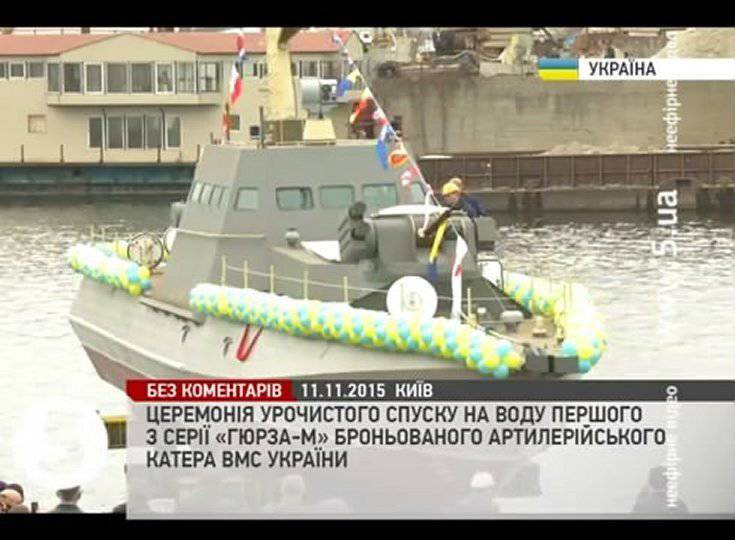 Screenshot of the report from the launching ceremony of the first boat "Gyurza-M" for Naval Forces. 11 November 2015

It soon became clear that the newest Ukrainian marine technology is still to be completed at the Odessa Shipyard Ukraine Ship Repair Enterprise (the former 50 anniversary shipyard named after Soviet Ukraine), which is part of the Odessa Commercial Sea Port State Enterprise, after which it passed state tests, will be accepted into the fleet. The implication was that this would happen by the Day of the Naval Forces of Ukraine - 3 July 2016. The Ukrainian military was so sure of this that, not waiting for the completion of the tests, in April of this year, Deputy Defense Minister Lieutenant General Igor Pavlovsky reported that “the military department ordered there are four more similar small armored artillery boats at the plant, and within the next month two more boats of a different class will be laid down, in which the specialists identified the assault assault ships of the Centaur project.

However, 8 months after the boats left their native Kiev enterprise, it was reported that "during the tests and firing, numerous flaws were discovered in the design of the armored boats, so the fleet cannot accept them for operation in this form. Now the tests are suspended for eliminating miscalculations. " As a result, at the holiday with the participation of the President of Ukraine, it was necessary to confine ourselves only to the official assignment of the ships names - Berdyansk and Akkerman, which Poroshenko for some reason considered "human settlements symbolizing our military and national unity."

Along the way, it turned out that, although already in February 2016, the boats started running trials, they still lacked many vital components, and some of the equipment was damaged or disappeared during transportation to Odessa. The main problem was the disruption of shipments of the ship's optical-electronic fire control system of small and medium caliber "Sova" developed and manufactured by the Kvant Research and Development Institute, mainly specializing in marine issues, whose losses on 1 in January 2016 were 3,761 million UAH, and wage arrears exceeded 15 million UAH Only in February and March in Odessa from Kiev were sent both sets of "Sov", which did not even pass factory tests, and in a very "raw" condition. Perth, can "move" the timing of operation of the first two boats in the autumn of this year, and even at the beginning of the next.

Another problem was the sensors detecting laser radiation, which until the "Crimean spring" supplied Theodosia state optical plant. In order to speed up the replacement process, the order was also transferred to Kvant, technical requirements from the Ministry of Defense are reduced, so the boats received sensors in the land, rather than in the sea version. 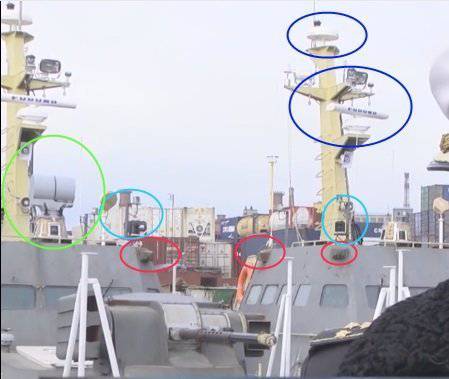 On both boats installed sensors detecting laser radiation (circled in red) and only on one - OES SUO "Owl" (circled in green), Furano radar (circled in blue). March 2016

Furano western radar stations were also imported by Spetstechnoexport after the departure of boats to Odessa. How much such an "innovative" approach to bringing the state of military equipment to the mind has affected the total costs, no one will judge, but the timing of the delay can easily be clarified by comparison with the same small anti-submarine ship Ternopil, which left Lenin's Forge. 23 September 2005 and completed acceptance tests through the 3,5 month, although it had a more complex structure than the ill-fated boats.

A rather bad omen is the fact of numerous complaints about boats and equipment of similar types that came from operating in Kazakhstan and Uzbekistan for several years.

Last negative moment in stories with the Ukrainian "Gyurzoy-M" is associated with the prospects for its use and, accordingly, the need to order. According to the technical requirements of the project, the boats are designed to carry out combat watches in the border waters of shallow depths - rivers, lakes, as well as in the coastal sea zone, patrol and protect water boundaries, as well as combat small-sized ships and assist airborne and border groups. In general, this is a good boat to fight smugglers. These tasks are met by the weapons complex and local protection in 4-6 mm of armor, which, however, are completely inadequate for confronting the Russian fleet, which suggests a new Ukrainian military doctrine.

Evil tongues insist that "Gyurza" went solely because its manufacturer is "Leninsky smithy", the owner of which is the current president of Ukraine. At the same time, they remind that both boats that were tested today should have been handed over to the Navy even at the end of 2013, however, due to the poor quality of the work of the Leninskaya Kuznitsa factory in December 2013, the MOU canceled the contract, planning to transfer the construction of these boats company. Construction was resumed in the fall of 2014 as an "emergency military order," the need for which is highly questionable.

In this case, information about the payment of "Lenkuzney" penalties for disrupting the timing and failure to execute the first and second government contracts is not available, although such sanctions are necessarily provided for by the terms of the contracts. In fact, in November last year, in exchange for additional financing, the unfinished corps, left over from the previous unfulfilled state order, were transferred to the President’s enterprise. This is confirmed by the analysis of the main indicators of financial and economic activity for 2014, and 2015, which are quite significantly improved. So the net loss was reduced by 28 mln. UAH, and the staff of employees grew by 54 person and reached 378. At the same time on 125 mln. current financial obligations were reduced, which miraculously coincided with the fact that the unfinished boats were launched.

Is it any wonder that the same Poroshenko, speaking on July 3 in Odessa, was extremely dissatisfied with “meeting the needs of the Navy,” noting that “Measures taken by the Cabinet of Ministers, the Ministry of Defense and the General Staff do not currently meet the needs of comprehensive support of the Military Sea Forces of Ukraine. " After all, the main share of funds will go to the company controlled by him ...

Ctrl Enter
Noticed oshЫbku Highlight text and press. Ctrl + Enter
We are
What you didn't want to know about EnglandList of destroyed the largest and most high-tech enterprises
Military Reviewin Yandex News
Military Reviewin Google News
30 comments
Information
Dear reader, to leave comments on the publication, you must sign in.