In the man-made winter phase

July 6 2016
78
A hybrid war is being waged against Russia, its most important component is economic. The country's ability to preserve sovereignty depends largely on the state of the national economy.


There is no need to go far for examples. The USSR was one of the most dynamically developing powers, won the Second World War, reached military parity with the United States, but due to miscalculations in the economic strategy, it lost on this front and as a result ceased to exist.

Quarter century psu under the tail

The threats of loss of sovereignty that have arisen before modern Russia are more serious. The danger of a possible defeat in a hybrid war, when compared with the situation of, say, thirty years ago, is an order of magnitude higher. The participation of the USSR in the world economy from 1950 (that is, from post-war reconstruction) and up to about 1980 was about 10 percent. At the same time, the US share for the same period was reduced from 30 to 20 percent. Together with the countries of the socialist camp (without China), the USSR’s contribution to the world economy was 14 – 15 percent.

“Then began a period of stagnation and unsuccessful Gorbachev perestroika, as a result of which the USSR’s share fell from 10 to less than 7,5 percent, and the countries of the Soviet bloc to 10 – 11 percent,” recalls Andrei Kobyakov. “We note that Russia's contribution to the world economy at the time of the collapse of the USSR was approximately 4,25 percent.”

In physical terms, today's Russian GDP is about the same as it was in 1991 year. But since the rest of the world did not stand still, our country's share in the global economy plummeted. By the beginning of the global financial crisis of 2008, it was reduced to 2,5 percent. According to the results of 2015, we have two percent.

But besides absolute numbers there are qualitative characteristics. Over the past years, our economy has degraded primarily in terms of structure. “The share of the manufacturing and processing industries, high-tech industries and high-tech products in the total output has fallen sharply, and there has been a hypertrophied dependence on the extraction of raw materials and industries of the first redistribution,” said Kobyakov. - If the Soviet economy was almost self-sufficient, then in today's Russia there are no many very different industries. The influence of external factors and markets has dramatically increased, including in many strategic positions. ” 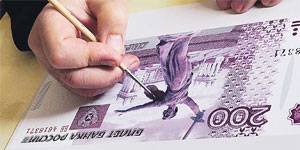 Russia is one of the main suppliers to the world aluminum market, the smelting of which consumes a large amount of electricity. All of it is attributed to Russia as its domestic consumption. But the production of the first redistribution makes the minimum contribution to the gross product. Thus, providing the world with aluminum, Russia in terms of energy efficiency will always look significantly worse than the countries that, having bought this metal, make it into final products.

A completely new factor is the rapid development of China. Its share in the global economy, at the end of the 80-x was proportional to the Soviet one, rose to 2008 percent by the beginning of the global financial crisis in 17,5 and was only slightly lower than the USA (18,5%). At the end of the year, it was 2015 23 – 24 percent, that is, now the largest economy in the world - the Chinese.

Even with the decaying growth rates (from the current 7 – 7,5% to 3 – 3,5% to 2030), the Celestial Empire will give a third of the global gross domestic product in 15 years. By that time, about the same (or slightly more) than the United States and the European Union combined. We are on the verge of a new division of the world.

Sergei Glazyev, in a report at the interdepartmental commission of the Security Council and on the Presidium of the Russian Academy of Sciences, noted: “The United States strives to retain leadership by unleashing world war in order to weaken both its competitors and partners. They need control over Russia, Central Asia and the Middle East in order to secure a strategic advantage in managing the supply of critical raw materials and limit China’s capabilities. In the ongoing US hybrid war against Russia, a key place is occupied by the financial and economic front, on which the enemy - the United States and its allies - has an overwhelming advantage. They use their dominance in the global monetary and financial system to manipulate the financial market of Russia and destabilize its macroeconomic position, undermine the mechanisms of reproduction and economic development. This is done through a combination of financial embargo and speculative attacks. ”

In sum, China and the united West (represented by the US and the EU) by 2030 will account for two-thirds of the global economy. The share of Russia, even with the most favorable scenario, that is, with a change in economic policy and a transition to sustained accelerated growth, will be an order of magnitude less than each of these major players. In any case, it will not exceed three percent. Russia seems to be trapped in the ticks between the forces challenging the right to global hegemony, and right on the line of fire and opposition along the East-West axis between the US / EU on the one hand and China on the other.

Obviously, to maintain sovereignty in the new conditions alone is impossible. We need active unifying initiatives to design the North-South axis of Eurasia. According to serious experts, Russia should direct efforts to form a third pole of forces in the global geopolitical and geoeconomic alignment. Or, if you use historical by analogy, the new Non-Aligned Movement.

In this regard, we have potential allies - regional Eurasian powers and countries with centuries-old civilizational experience, the desire for independence and quite ambitious not to want to be in the sphere of influence of the West or China, and in fact go into vassal position to one of two main centers of power. First of all, these are India and Iran, as well as a number of other countries, for example, in the space of the former USSR.

In order to implement this plan, which, without exaggeration, is very complicated, Russia must begin to demonstrate substantial economic dynamics. Without this application for leadership in the organization of the new Non-Aligned Movement and the creation of a third center of power in the global configuration will look unconvincing. As proof of the last thesis, it is appropriate to recall the inhibition of Eurasian integration processes, except for the last SCO summit, where important economic programs were adopted, which, however, would have an effect only after many years.

In the chains of consensus

The main reason for the degradation of the Russian economy, stresses Andrei Kobyakov, a quarter-century policy based on the Washington consensus, on the dogmas of neoliberalism. All this time we had no strategic planning. The domestic economy hung at the behest of the waves, having no development goals. It is necessary to completely change the approaches in this area.

The world economy is now in the phase of the so-called Kondratyev winter, that is, the fifth long wave coming down. The most important reason for the powerful take-off of the USSR from the 30-s up to the beginning of the 80-s was the rapid catch-up in the third technological mode (Stalin's industrialization), and then the advancing development of the fourth technological order (TU) in the post-war period. And then the political leadership of the country slept a rapid jerk of the West, which was the first to establish production V TU, based on computer-chip technology, new means of communication.

In the coming years, there will be a transition to the sixth Kondratieff cycle and technical conditions. Sergei Glazyev has repeatedly stressed that it is precisely during such periods of global change for lagging countries that a “window of opportunity” opens up to get ahead and perform an economic miracle. The development strategy necessary for successful modernization consists in anticipating the development of basic productions of the new TU and the earliest possible withdrawal of the Russian economy to the long wave of growth associated with it. This requires the concentration of resources, the formation of clusters of promising industries, etc.


We need a special body - the State Strategic Planning Committee under the President of Russia, since today not a single department has such functionality.

Of course, the transition to such a strategy of economic development will, in the opinion of Academician of the Russian Academy of Sciences Evgeny Velikhov, cause serious resistance both inside the country (with a strong raw materials lobby) and abroad. Indeed, in this case, Russia will reduce the sale of crude oil, gas, untreated wood, metal, energy-intensive components of the chemical industry and will proceed to export the products of the next stages of redistribution. Thus, it will undermine the resource base of foreign partners, who now bring our products to the final products with high profits.

It is necessary to change the approaches in the monetary sphere. They are vicious and counterproductive. However, the same can be said about the budget, tax policy, etc.

The world is experiencing a crisis of overproduction and demand, which has given rise to worldwide deflation, which has spread to all commodity groups. It is necessary to stimulate the purchasing power of the population, which is what the US, EU, Japan, and PRC authorities are doing. What does our government do according to the “anti-crisis plan”? There is exactly the opposite: it compresses both public and private demand. All countries in a downturn are seeking to increase, including through domestic debt financing, government spending to compensate for the reduction in private revenues, and we are cutting budget spending. Everyone eases the fiscal burden in order to free up public funds for more active consumption, and corporate funds for investment, in our country taxes and excise taxes are rising. All independent countries are pursuing a very active monetary policy, lowering the discount rate to zero, in our country the Central Bank is threatening to hurt an already prohibitively high percentage again. Obviously, with such a policy, the crisis will only deepen. Sitting on a pile of money and refinancing banks at 15 percent and above, as the Central Bank of the Russian Federation does, means not even holding back the growth of the economy, but choking it. Recall: in the US, the discount rate is 0,25 percent.

To all this, I would add another significant factor. Explaining the reasons for our stagnation, experts talk only about the economy, geopolitical problems and backward technologies. But for some reason nobody remembers the productive forces, the people of labor. And after all, they are the workers, engineers, scientists, doctors and teachers, peasants - the main characters in our current drama.

In Russia, 20,2 million living below the poverty line. Approximately another 20 of millions stopped near this line, saving on food and clothing. Keeping your people in a black body is not just immoral, but criminal, especially against the background of the half-million currency dividends of Rosneft top managers, or in no way dependent on the salary results in 2 – 2,5 million euros of so-called football players. It is necessary to radically change social policy. Although the money alone does not correct the situation. The economic rise of the USSR in the 50 – 60 years is explained by the fact that the victorious people built a bright future - the kingdom of justice. These dreams did not come true. Why - a separate conversation. What kind of society we are building today, no one has explained. Therefore, the most serious work is ahead on the ideological front. It is necessary to brightly show the face of a new hero, a labor man, and not a pop musician or effective manager.