July 5 2016
5
Exactly 40 years ago, 5 July 1976, a brave seaman-baltic Sergey Osipov passed away. Rear Admiral Sregey Osipov went through three wars (the Spanish Civil War, the Soviet-Finnish and the Great Patriotic War), writing his name in history domestic fleet. During the Great Patriotic War, he fought in the Baltic, bringing to battle part of the "mosquito forces" of the Red Banner Baltic Fleet (KBF) - torpedo boats. For his exploits and successes during the war years he was introduced to the title of Hero of the Soviet Union.


The future admiral was born in Riga 18 on December 1912, by nationality - Russian. He graduated from 7 classes and school factory apprenticeship (FZU) in the city of Kharkov, Ukrainian SSR, after which he worked as a mechanic at the factory "Sickle and Hammer." He was called up for service and went to the October 30 fleet of the year 1931. From this moment on, his fate will be inextricably linked with the sea. In June 1936, Sergey Osipov graduated from the MV Frunze Naval School. After the completion of the school, he immediately began to serve in the Baltic Fleet, where he was appointed navigator of the 3 division of the brigade of torpedo boats.

The main torpedo boat of the Soviet navy of those years was the G-5, which was produced in nine series from 1933 to 1944. In total, 328 torpedo boats of this type were built during this time. The full displacement of the boat was 17,8 tons, the crew - 6 people, including one officer (boat commander). The maximum speed is 51 knot, its boat could maintain for 15 minutes, for an hour the boat could go at full speed 47 knots, the economic speed in 36 knots it could keep 7 hours. The main armament of the G-5 torpedo boats were two 533-mm torpedo tubes, machine-gun armament was represented by two 7,62-mm machine guns YES or 12,7-mm DShK and one 7,62-mm ShKAS. 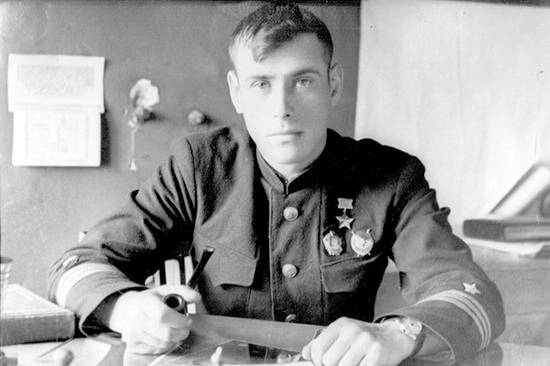 From April 1937 to March 1938, Sergey Alexandrovich Osipov took part in the hostilities in Spain on the side of the Republican fleet as commander of a torpedo boat, and also as a naval adviser. Total USSR sent to Spain four torpedo boats G-5, the base for which served Porman. For participation in this campaign, he was awarded the Order of the Red Banner. In general, the Soviet torpedo boats did not play a special role during the Spanish Civil War, they were often used for other purposes. Despite the weak seaworthiness and insufficient cruising range, they were engaged to accompany the convoys. Here their disadvantage was most clearly manifested - weak anti-aircraft weapons.

After returning from Spain on April 1938, Sergey Osipov commanded a detachment of a brigade of torpedo boats of the Baltic Fleet. Participation in hostilities in Spain and awarding the Order of the Red Banner did not protect the officer from the millstones of repression. He was repressed in July 1938 and dismissed from the fleet. However, at that time he was still very lucky. Sergey Aleksandrovich was rehabilitated in January 1939, and in May of the same year they were reinstated in the personnel of the Soviet Navy. From June 1939, he was the commander of the 3 squadron of the 3 division of the brigade of torpedo boats of the Baltic Fleet. In the same year he became a participant of the second war, the Soviet-Finnish war, from December 1939 he was the commander of the torpedo boat detachment of the Libava naval base.

The knowledge and skills accumulated in the pre-war years were very useful to Sergei Osipov after the start of World War II, of which he was from the first to the last day of it. All this time being a “sailor-boatman”. From June to September 1941, he was the commander of a detachment of torpedo boats of the Baltic Fleet, in September-December 1941 of the year - 2 of the 4 division, in December 1941 - November of 1942, the 2 division. From November 1942 to April 1943 is the commander of the 4 Division. From April 1943 of the year - the commander of the 1-th (from February 1944 of the year - 1-th Guards) division of torpedo boats of the Baltic Fleet. 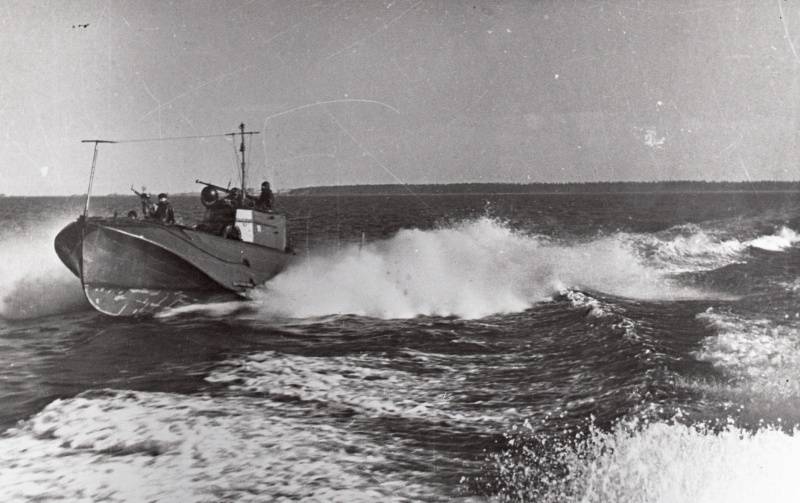 The torpedo boat G-5 from the 4 division of the torpedo boats of the Hero of the Soviet Union, captain of the 3 rank Sergey Alexandrovich Osipov performs a combat mission. Photo: waralbum.ru

Already from 22 to 26 on June 1941, torpedo boats of the Libavsk naval base detachment commanded by Sergey Alexandrovich Osipov provided mine performances near Libau. June 27 torpedo boats Osipova first met with the German fleet. On this day, during the evacuation of the commanders of the Libava naval base, they met at sea with 4 German torpedo boats, one of which was damaged. He recorded the first enemy vessels sunk to his own account, with the attacks carried out in the Irben Strait of July 27 and August 1 of the year 1941. On July 27, he attacked an enemy caravan with three torpedo boats, sinking the transport and 2 of the destroyer and damaging the patrol ship. August 1 launched an attack by four torpedo boats on enemy destroyers, drowning one of them. For courage and heroism shown in battles with the enemy, the decree of the Presidium of the Supreme Soviet of the USSR of April 3 April 1942 to Lieutenant Commander Sergey Alexandrovich Osipov was awarded the title Hero of the Soviet Union with the award of the Order of Lenin and the Gold Star medal number 527.

The award list noted that Lieutenant-Commander Sergey Osipov demonstrated the high skill of naval combat, while displaying courage and heroism. As a result, having at his disposal a small group of torpedo boats, he managed to inflict significant losses on the enemy’s fleet in a short time. On his account were two downed aircraft (U-88 and Me-109 17 and 20 August 1941 of the year), 5 submerged destroyers, 4 transport and 2 torpedoes of the enemy. In addition, 2 of a destroyer and one enemy patrol ship were blown up on mines exposed by torpedo boats.

Torpedo boats commanded by Sergey Alexandrovich Osipov, in the face of strong opposition from the enemy in 1941-1943, sank 27 enemy ships and conducted 54 active mine settings. In 1944, the torpedo boat division under his command conducted 16 mine setups and 7 torpedo attacks on enemy communications in the Vyborg and Narva bays (he took personal part in three of these attacks), which resulted in the sinking of 14 ships and enemy ships. At the same time, Osipov was awarded the Order of Ushakov 2 degree with the number 3. It is curious that for the 1944 campaign of the year, the guard of the captain of the 3 rank Sergei Alexandrovich Osipov, who commanded the 1 guards division of the Red Banner Baltic Fleet torpedo boats, was presented to the second rank of Hero of the Soviet Union, but he was denied this campaign. 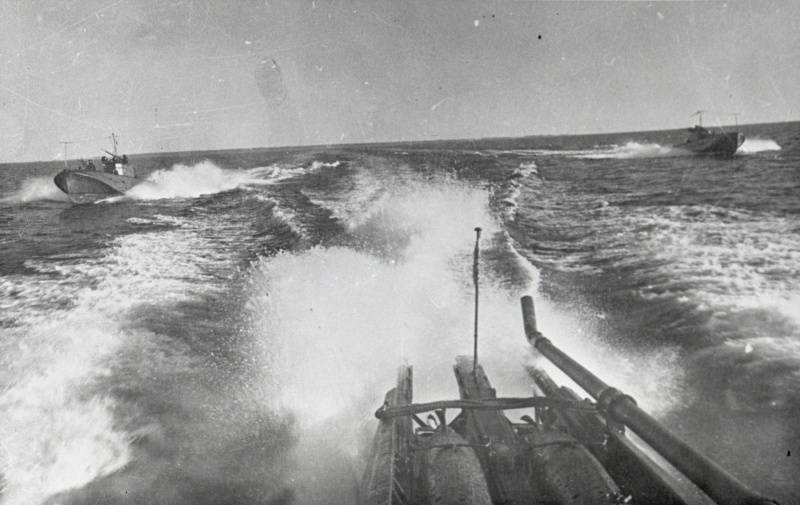 Since the beginning of the Soviet offensive on the southern coast of the Gulf of Finland, the Ospov Division’s torpedo boats took part in all the landing operations of 1944-1945 both on the mainland and on the islands of Moondesund archipelago. It is worth noting that even small torpedo boats of the G-5 project, instead of torpedoes located in torpedo troughs, could take on board troops in the number of 20-22 people, and with overload, up to 30-50 people. In April 1945, Sergey Osipov personally supervised the landing of troops from torpedo boats on the Frische-Nerung spit in order to eliminate the remnants of the defeated Kurland group of German troops. With the liberation of the city of Liepāja 9 in May 1945, Osipov entered this naval base on the lead torpedo boat.

After the end of World War II, Sergei Alexandrovich continued to serve in the fleet, where he commanded the torpedo boat division until December 1946 of the year, until he departed for further study. In 1949, he successfully graduated from the KE Voroshilov Naval Academy. From December of the same year he was the commander of the Pechenga naval base of the Northern Fleet. From October 1951 was the commander of the 185 brigade of torpedo boats of the Northern Fleet, from December 1953 of the year - the commander of the 41 division of torpedo boats of the Black Sea Fleet. 31 May 1954, Sergey Osipov was given the rank of Rear Admiral. From December 1955, he was at the disposal of the Commander-in-Chief of the USSR Navy, and from February 1956 he was the head of the special department of the Naval Academy.

In December, 1958, Rear Admiral Sergey Alexandrovich Osipov, was forced to leave the service for health reasons, he would be transferred to the reserve for illness. After leaving the service he lived in Leningrad, where 5 died on July 1976 of the year. He was buried here at the Bolshohokhoinsky cemetery. The name of the Hero of the Soviet Union Sergey Alexandrovich Osipov was immortalized in the memorial "Soldiers-katernikam", which is located in the city of Baltiisk, in the Kaliningrad region. 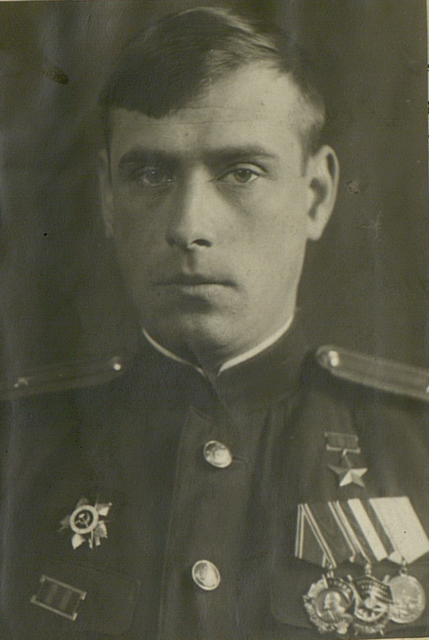 Also, the name of Sergey Alexandrovich Osipov was the name of a large sea tanker for the integrated supply of the Northern Fleet of the Russian Federation. Until 1997, the ship bore the name Dniester, as part of the fleet from 1973. During World War II, Sergey Osipov drove the G-5 torpedo boats into the sea with a total displacement of just 18 tons, and today a tanker with a displacement of more than 22 thousand tons and a length of 162 meters is named in his honor. The tanker “Sergey Osipov” is able to transfer cargoes in the sea using the traverse method on the move, as well as to supply fleet warships with various types of fuel and lubricants, boiler and drinking water, as well as food and dry goods. The ship, bearing the name of the famous admiral, has repeatedly provided for the operations of the Russian Navy ships in long voyages in the Arctic and Atlantic oceans, as well as in the Mediterranean Sea.