“There was a complete theft. The sailors slept on bare mattresses " 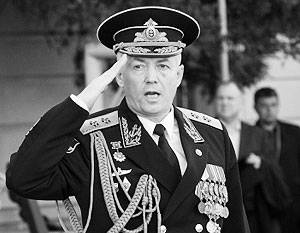 Whoever becomes the new commander of the Baltic fleet, he will have to deal with the consequences of an unprecedented scandal for the Russian Armed Forces. On Thursday, military experts continued to discuss the shameful removal of the leadership of the fleet. There is also new evidence about what exactly could have served as the reason for such decisions.

On Wednesday, Russian Defense Minister General of the Army Sergei Shoigu dismissed Viktor Kravchuk, commander of the Baltic Fleet, and Baltic Chief Fleet Chief of Staff Sergei Popov from his duties for omissions in combat training and distorting the state of affairs. About this in detail wrote the newspaper VIEW.
Note that Vice Admiral Alexander Nosatov was transferred to the post of Chief of the Naval Academy from the post of Chief of Staff of the Black Sea Fleet. Nosatov began his military career in the Pacific Fleet, and from 2009 to 2012 he served in the Baltic Fleet, in particular, as commander of the naval base in Baltiisk. In 2012, Nosatov transferred to service in the Black Sea Fleet.

The purge of the defense minister in the Baltic Fleet immediately exposed the problems of the Russian Navy.

Another Chernomorets in the Baltic

Earlier on Thursday, a number of media outlets called the name of another high-ranking officer, who was expected to be appointed to the post of commander of the Baltic Fleet.

The Petersburg edition of Fontanka reported that Vice-Admiral Sergei Yeliseyev, the deputy commander for combat training, was already "temporarily in command of the Baltic Fleet". Previously, Yeliseyev served in the Ukrainian Navy in the same rank; during 14 years he was deputy commander of the Navy. After the events in the Crimea, he moved to the service in the Russian Navy (as well as the former commander of the Navy, rear admiral Denis Berezovsky and the former head of staff of the Ukrainian fleet, rear admiral Dmitry Shakuro). If Yeliseyev still takes the post of commander of the Baltic Fleet, this will be the first time that a former Ukrainian admiral will take up this post.

It should be noted that in Ukraine Sergey Eliseev was charged with “desertion, high treason, encroachment on the territorial integrity and inviolability of Ukraine, promoting the activities of a terrorist organization, and waging an aggressive war”.

The hypothetical designation of the former “Ukrainian” Yeliseyev (which made one suspect that the reserve personnel is too small in the personnel reserve) is still a speculation. But note that the position of commander is without the prefix “and. O. "- while vacant.

“The Minister of Defense was misinformed”

Against the background of the scandalous resignations on the Baltic Fleet, the opinion of the captain of the 1 rank, the chairman of the All-Russian Fleet Support Movement Mikhail Nenashev, who stood up for the dismissed Kravchuk, looks interesting.

In his commentary to the BFM radio station, Nenashev emphasizes that “the events in the Baltic Fleet, related to personnel shocks, cannot be called another way, they are surprised and amazed, because, apparently, the Minister of Defense was misinformed, once the commander was set up, who was quite successful He led the Baltic Fleet, as allowed such failures, for which with such disgrace trying to dismiss. Objectively, the Baltic fleet under the command of Kravchuk Viktor Petrovich, on the contrary, was one of the most successful, stated Nenashev. “The exercises in the Baltic Sea with the involvement of all the forces of the Baltic Fleet have increased in quantitative and qualitative indicators by several times. And after that talk about some system failures? This can be explained only by some interpersonal manifestations, ”the expert is sure.

“But even more surprising is the passivity of the new commander-in-chief of the Navy, it is his duty to stand guard over the interests of the cause and defend people who serve adequately because Kravchuk Viktor Petrovich received an award from the Minister of Defense in February just for success in combat training,” captain of the 1 rank.

"There was a complete theft"

TASS military observer, retired colonel Viktor Litovkin is confident that the sharpness of personnel decisions corresponds to the shortcomings that were discovered following the results of the check on the Baltic Fleet. Among the glaring flaws, for example, the lack of sheets: in some parts of the sailors slept on bare mattresses. And in some canteens they did not report food to the soldiers rations, the portions were trimmed.

“There was a complete theft. The commanders did not pay attention to this. And someone, perhaps, organized this theft, when they reduced the standard of allowances to people. Now the prosecutor's office is engaged in it. Nevertheless, the verification committee revealed such facts. And, of course, the commander is responsible for all this, and not only the commander, but also the commanders of units, divisions, chiefs of staff, deputies in the rear, ”LYZEVKIN told the newspaper VZGLYAD.

The expert stressed that Moscow received reports on problems in the Baltic Fleet and poor execution of orders of the Minister of Defense. “When people who sleep on bare mattresses, see that their commander speaks out and says that everything is in order, what confidence can there be in the command of the fleet? This lie has grown, but it has its limits, ”he explained.

In addition, there were problems in creating the 11 Army Corps, for which military camps, barracks, and military equipment parks were to be built, but "nothing was done." “Where the money went is unknown. Therefore, the leadership of the Ministry of Defense was forced to take drastic measures, ”Litovkin believes. As for the situation in other fleets, Litovkin does not exclude that there may be some violations there. But the whipping that occurred "will be indicative."

"They will change all involved."

In turn, the chief editor of the magazine Arsenal of the Fatherland, a member of the expert council of the board of the Military-Industrial Commission of the Russian Federation, reserve colonel Viktor Murakhovsky is sure that "the whole thing is in the situation that has developed there."

“It did not instantly take shape, but gradually deteriorated. Such signals came to the leadership of the Ministry of Defense. As a result, this resulted in verification of the Baltic Fleet and other connections of the Kaliningrad special region. And the relevant report of the chairman of the commission at the Ministry of Defense collegium and the results of the discussion of this report led to such conclusions as were made by the minister. In fact, the case is “outstanding”, unprecedented, for these conclusions and decisions to be voiced, especially with such destructive formulations addressed to the leadership of the Baltic Fleet, ”Murakhovsky told the newspaper VZGLYAD.

As for the figure of the new commander in chief, who must be appointed on Friday morning, Viktor Litovkin said that he was aware that it would be "definitely not Mr. Eliseev and none of the (former) Ukrainian generals."

“This will be a man from another fleet. At the Baltic Fleet will change all involved. They will all be sent down to the Northern and Pacific Fleets, to other places. As I know, only one commander will be dismissed, and all others will be sent down to other posts, ”said Litovkin, adding that the commander of one of the Northern Fleet submarines will be appointed head of the Baltic Fleet.