Secrets of the Victory Parade

July 3 2016
11
On the Victory Parade, held 24 June 1945, in Red Square, it would be known, everything would seem. However, there are moments that have not yet been mentioned for various reasons.


By order of the Supreme Commander-in-Chief I.V. Stalin dated June 22, 1945 No. 370, the general leadership for organizing the parade was assigned to Colonel-General Artemyev, commander of the Moscow Military District troops. Recall some details of his biography. Pavel Artemyevich Artemyev - personnel general of the NKVD. A participant in the Imperialist and Civil Wars, since 1921 he has been serving in the OGPU troops, brilliantly graduated from the Higher Border School and the Frunze Military Academy, has gone from a junior commander to the commander of the Separate Motorized Rifle Special Purpose Division named after F. Dzerzhinsky. At the beginning of the war he headed the Directorate of Operational Forces of the NKVD, which began to be widely involved in guarding the rear of the Red Army. Co-workers spoke of Artemyev as a military leader of great will and endurance. It was he who commanded November 7, 1941 historical parade when military units directly from Red Square went to the front.

Artemiev’s immediate assistant for preparing for the June 24 parade is Moscow’s military commander Lieutenant-General Kuzma Romanovich Sinilov, also from the NKVD troops. True, at first his fighting skills were forged in the ranks of the legendary OKDVA - the Special Red Banner Far Eastern Army. Dashing komesk proved to be great during the conflict on the CER, for his skillful and decisive actions, as well as for his personal courage and bravery, he was awarded the Order of the Red Banner. The presentation was signed by the commander Vasily Blucher.

In 30-ies, Sinilov was transferred to the OGPU troops, where he first strengthened the country's borders in the Far East, and before the war he led the very complicated operational plan of the Murmansk border district. At the end of the summer of 1941, when the enemy rushed to the capital, Major General Sinilov was urgently summoned to Moscow and charged with forming the 2 th motorized rifle division of the special purpose of the NKVD troops. The task of the compound is to patrol the streets of the capital and the nearest Moscow region in order to maintain order, fight against saboteurs, spies and provocateurs, as well as create a tough defense within the Garden Ring in the event of a breakthrough by the Nazis in the city.

October 19 at a meeting of the State Defense Committee was decided to impose a state of siege and the appointment of the military commander of Moscow, Major-General Sinilov. It was emphasized in the resolution that the protection of "the strictest order" was imposed. The troops of the NKVD, the militia, volunteer workers detachments that were handed over to the commandant were entitled to “provocateurs, spies and other agents of the enemy calling for disturbing order, to be shot on the spot”.

It was Sinilov, by then lieutenant-general, who provided a list of the parts involved in June 24 on Red Square. It also included ceremonial boxes from the troops of the NKVD of the Moscow Garrison: the Dzerzhinsky divisions, the special purpose 2-MSD, the Moscow Military Technical School. Menzhinsky, as well as the combined cavalry squadron. Total 4500 people. 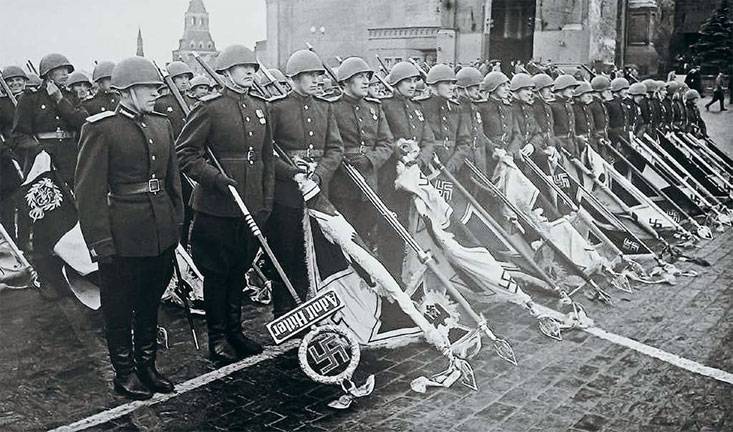 Security and law and order on the square and the approaches to it were provided by units and divisions of the division named after Dzerzhinsky and the 2-th MSD of a special purpose. For the protection of members of the government directly from the Mausoleum was allocated operational troop outfit from 3-th SME division of Dzerzhinsky number of 770 fighters.

The famous special joint battalion from 200, the man who threw to the foot of the Mausoleum the regalia of the defeated enemy — the Wehrmacht’s banners and standards — was half composed of the soldiers of the Dzerzhinsky division. Commanded the triumphal division of the officer of the oldest connection of internal troops, Senior Lieutenant Dmitry Vovk. He served in the 3-SME as a commander of the divisional company of the guard of honor and was well prepared in combat.

A retired Major General, IG. Belikov, a veteran of the Dzerzhinsky division, recalled: “On May 12, the unsuspecting lieutenant Dmitry Vovka was called up by the regimental commander, Colonel N. I. Yakovlev. The officer who entered the office was embarrassed by the fact that several generals had gathered there ... Colonel Yakovlev announced Vovka that he was appointed commander of a special battalion of captured banners at the upcoming Victory Parade. ”

Why combatants half diluted Dzerzhinsky? There are two reasons. The first: the front-line soldiers, unaccustomed to the line, were given the wisdom of the “parade-ceremonial” science. Second, it is quite likely that Chekist warriors in the ranks of a special unit were an additional factor of security at the Mausoleum.

The idea of ​​a special ritual of “neglecting not the enemy, but to his defeated military differences” was born of a historical example, when in the army of the great Suvorov, the banners of the defeated enemy were thrown at the feet of the victors. 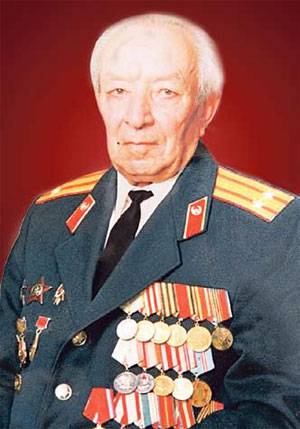 “They called me to headquarters,” recalled Dmitry Grigorievich Vovk, a retired lieutenant after years, “where they announced the upcoming parade and ordered us to train a special battalion.” The military commandant of Moscow came out with a slightly dumbfounded senior lieutenant into the courtyard and personally showed how to throw the banners, picking up two-meter-long wooden struts from the tents with force.

Dmitry Vovk skillfully prepared the soldiers of the special battalion for the responsible event. At the last - the final rehearsal of the parade, held on June 21 at night on Red Square, was attended by Marshal G. K. Zhukov. The ritual demonstrated by the subordinates of the senior lieutenant, he liked. After that, Marshal of Victory sincerely thanked the diligent officer: "Well, commander, do as well or even better on the day of the parade."

On June 24, 1945, a combined battalion was built at St. Basil’s Cathedral two hours before the parade. In the first line are the tallest Dzerzhins. Right-flank - a heroic physique Senior Sergeant Fedor Lighthide. He got Hitler’s personal standard, awarded for the “special merits” of the 1st tank SS divisions.

After an impressive passage of the front columns of the fronts, genera and types of troops, the thousand-pipe brass band was silent, silence hung over the square for an instant. And then came the exciting climax - under a loud drum roll along the stands to the Mausoleum, led his special battalion, Dmitry Vovk. The hated fascist cloths, wet from the rain, became much heavier, which somewhat confused the soldiers' ranks when overthrowing enemy banners "at the feet of the Kremlin." This is evident in the newsreel footage.

For centuries and in life

What kind of people participated in the landmark event? How did their fate?

Dmitry Vovk - from the Donbass, from a working family. It is curious that the place of his birth was New York. But not the “city of the yellow devil”, but a village near Gorlovka, in which foreign specialists lived before the revolution. By the way, it was renamed to Novgorodskoye town only in 1951. His father died in Civil, after graduating from school FZO Dmitry worked as a mechanic at a machine-building plant, before the war he was drafted into the army, went to serve in the Dzerzhinsky division. Member of the historic 1941 parade of the year. He fought, underwent accelerated training in the school, the lieutenant returned to the division. After WWII he continued his officer career in the internal troops. He served in the Urals in the closed cities of Tomsk-7 and Sverdlovsk-44 (now their names are declassified, this is Seversk and Novouralsk), protected important industrial facilities on which the "nuclear shield" of the Motherland was forged. After completing his service as a lieutenant colonel, he lived in Sverdlovsk, worked at the school as a military commissar. He passed away on 83 on the very day of the Victory Parade - 24 June 2001.

Senior sergeant Fedor Antonovich Lokoshkur is also Ukrainian, originally from Dnipropetrovsk region. As part of the Sukhumi division of the NKVD troops he fought in the North Caucasus, was twice wounded, wounded, awarded the Order of Glory of the 3 degree. In 1943-m transferred to the division of Dzerzhinsky. Stand out almost two meters tall and heroic physique. Apparently, it was no coincidence that he was entrusted with Hitler's standard with heavy bronze casting. In 1947, he was demobilized, settled in Obninsk near Moscow, worked as a carpenter.

And what about the generals who prepared the Victory Parade? After the death of Stalin, Artemyev was demoted and sent as deputy commander of the Urals Military District. Former services do not count, the stigma is Stalinist. Artemiev died in 1979, buried at the Novodevichy cemetery. Lieutenant-General Sinilov was dismissed from the army in 1953, although he was just 51 a year old. The permanent military commander of Moscow, the most difficult time for the country, died in 1957. He was rewarded with the same Novodevichy ...