Comments on events in Debaltseve

July 1 2016
159
It has long been so "hot" in LDNR, as last night. We already began to forget about Lysenko. Tom Andrei Lysenko himself, who made statements about the victories of the Armed Forces of Ukraine on the Donetsk front, about the repeated death of Motorola and Givi, about the partisans and the atrocities of the Russian occupiers. Today Lysenko is a big man. After all, the speaker of the President Poroshenko on the ATO. 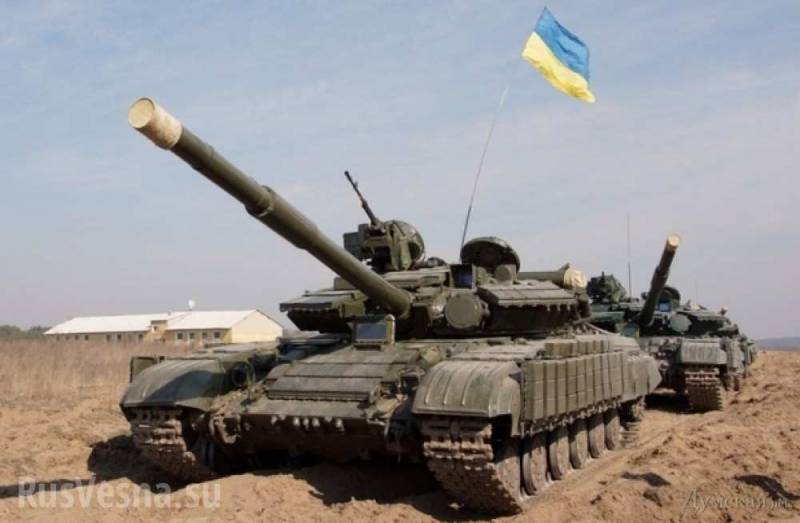 Let me remind you that it all started with the message about the death of the opera singer. The great singer rushed from France to destroy separatism. Naturally, as part of the Right Sector. I do not know what kind of singer he is, but the soldier turned out to be so-so.

And then went to ukroSMI conflicting messages. Here is what TSN reported: "According to the military, the enemy came close to their positions, and then melee began. The military 54 and 25 brigades and Right Sector volunteers began to push back the separatists, with the result that the military advanced a mile and a half one of the strongholds of the DPR, where an entire platoon was allegedly destroyed. "

Nothing, Ukrainians ate such messages calmly. The logic is simple. What could some miners and drivers do? They do not even know that artillery preparation is necessary when attacking fortified positions. Otherwise, the attackers will stumble upon a prepared defense and nothing but serious losses such an attack will bring. Yes, and the death of the singer looks heroic.

Today, through the mouth of Lysenko, the Supreme Soviet of Ukraine declared its commitment to the Minsk agreements and full observance of the truce regime.

“I’ll respond to such messages with a Russian saying - fear has big eyes. This information is completely absurd and not true. The ATO forces are in their positions.”

By the way, the deceased singer was written off to work "wild" sniper. Everything! Talk about this kind of and no longer needed. Only the modern world is so arranged that information quietly comes from both sides. Since, according to the speaker of the President of Ukraine, the Ukrainian army and the punishers were sitting in their positions, you will have to read the other side.

Agency "Reedus" reports: "... as a result of lengthy battles from the LC, 20 people died. On the side of the Armed Forces of Ukraine, more than 200."

The information published by official sources differs significantly from these figures. But at this time I am inclined to believe the correspondent of "Reedus".

“The break-through of the Armed Forces of Ukraine began deep into the night. Ukrainians, hiding behind artillery and armored vehicles, advanced with fights 4 kilometers along the Artemovsk-Debaltseve highway. They pushed off parts of the DNR XD motorized rifle brigade and occupied a dominant height above the village of Logvinovo.”

“When the Ukrainian troops sounded out that the positions in that area were not the most fortified, they went on the attack. From the DNR, there were mostly young, undetermined guys. And, having suffered losses, they retreated.”

“But as soon as the soldiers of the Supreme Court of Ukraine took up the positions left by the troops of the DPR, the artillery of the“ Republicans ”began to work. Hence, such high losses from the Ukrainian military”.

It looks quite logical. And Edward Basurin really confirms the loss of the APU. Moreover, he is talking about the destruction of an armored troop-carrier and two infantry fighting vehicles. However, the correspondent of "Reedus" speaks about participation in the battle only of the APU. There is no question of any punitive battalions at all. But then it turns out that the singer really shot the sniper.

Another source, the agency "Russian Spring", referring to the fighter 100-th brigade of the Republican Guard DNR Anatoly Gelyukh, writes about the huge losses of the Armed Forces of Ukraine under Debaltseve.

“At night, at 2 hours and 20 minutes, Ukrainian fighters launched an offensive on a wide sector of the front near Uglegorsk. They knocked out the front lines of the DPR armed forces from the main positions and the heights of the first defense line and then from reserve positions. Moving with heavy losses (lost at least two platoons tanks T-64-BV, a large number of assault infantry), the enemy was able to come close to Uglegorsk. After which he was thrown back behind the second line of defense of the DPR by the main forces of the DPR Armed Forces who arrived and deployed into battle formations. "

Still, the opinion of the legendary brigade commander Igor Bezler, which he wrote on his blog, looks much more realistic: “The XU NXX nights were activated. They took Sanzharovka’s surroundings. Then they took the heights of 2.30 and 216 under Logvinovo,“ The Gryashchevskie rates ”are 220- 2,5 km to Uglegorsk approximately. Most likely they will cut Uglegorsk and Debaltsevo. To take the city in the forehead is stupid and inefficient. By evening, “Milk will lie down.” The best option is to “cut” the territory like a layer cake with isolation of Uglegorsk-Debaltseve, Gorlovka and Yenakiyevo. separately, Donetsk and sinovatoy ... Squares 3, 6351, 6350, 6348, 6149 already occupied by the enemy. "

There is absolutely no need to be a military strategist to understand: the situation is serious enough. Lysenko’s statements, reports from the LDNR are nothing more than an attempt to convince readers of the strength of one of the parties. Or, about the peace of another. I think no one knows the real losses today. The fastest growing list of missing people. And no one is going to stop fighting.

Ukraine launched an offensive on the eve of a new meeting in Minsk. In order to establish new boundaries of demarcation. The creeping seizure of neutral settlements and the nomination to the "neutral" of their posts is carried out precisely for this purpose. In addition, Ukrainian politicians are increasingly recalling "Minsk-1". And there, as you know, the line of demarcation was somewhat different than in Minsk-2.

In response to the "creeping" offensive of the Armed Forces of Ukraine VSNV, it is necessary to conduct a full-fledged offensive with the task of returning the lost territories. Only in this case, Ukrainian politicians will become "able to conduct full-fledged negotiations." And it must be done in the shortest possible time. Otherwise, positions will be strengthened, and it will be impossible to take them.

But in any case, peace in the Donbas comes to an end. What Poroshenko once spoke about as a way to solve the problem of the eastern territories, Kiev decided to begin to implement. The army, which has really become stronger today, must solve a task that diplomats and politicians could not solve. It is possible that the offensive was the requiem of the Minsk agreements.

Ctrl Enter
Noticed oshЫbku Highlight text and press. Ctrl + Enter
We are
Situational analysis of the death of the MH17 flight (Malaysian Boeing 777), made on the basis of engineering analysis from 15.08.2014Debaltsevo has a twin
Military Reviewin Yandex News
Military Reviewin Google News
159 comments
Ad