Who built Arkaim: DNA genealogy knows about it

July 3 2016
47
Both Eastern Slavs, Armenians and Anatolians all have an Aryan ancestor.


Let's consider another question: What about the Caucasus, Anatolia, the Middle East, the Arabian Peninsula as possible ancestral home of the Aryans, the genus R1a, the Slavs? We'll see.

Armenia. The age of the common ancestor of the genus R1a is 4400 years ago.

Asia Minor, Anatolian Peninsula. Historical crossroads on the routes between the Middle East, Europe and Asia. It was the first or second candidate for the "Indo-European ancestral home." However, the common ancestor of R1a lived there the same 4500-4000 years ago. But this is an “Indo-European” common ancestor. And the migration route of the most ancient carriers of R1a passed through Anatolia to the west, towards Europe, about 10-9 thousand years ago. This migration was also caught by linguists, having placed the proto-Indo-European language in Anatolia the same 10-9 thousand years ago. 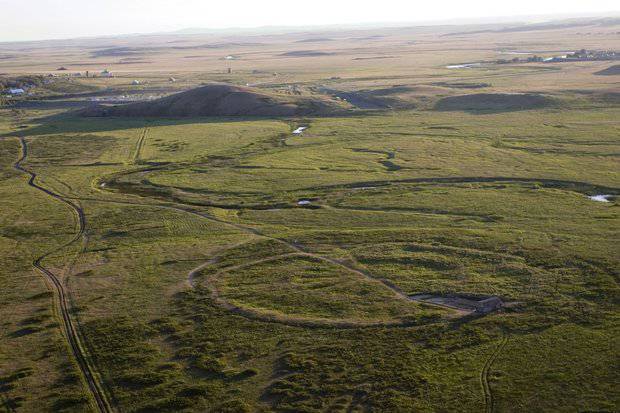 Panorama of the surroundings of the fortified settlement Arkaim. Photo from ru.wikipedia.org

Perhaps, he washed his boots. So again, the dialectic, the development of a spiral. So, both Eastern Slavs, Armenians, and Anatolians all have an Aryan ancestor either the same, or their ancestors are very close in time, within several generations.

It should be noted that 4500-4000 years before the common ancestor of the Aryans in Anatolia agrees well with the time of the appearance of the Hittites in Asia Minor in the last quarter of the 3rd millennium BC, as there is evidence that the Hittites revolted against Narramsin (2236-2200 years before AD, that is, 4244-4208 years before our time).

Haplotypes of the genus R1a in the Arabian Peninsula (the countries of the Gulf of Oman - Qatar, United Arab Emirates). And more - in Crete. The names of these countries sound strange in relation to the genus R1a, but our ancestors, or the descendants of our ancestors, visited ancient times there, and the modern owners of R1a in those parts carry their Y-chromosomes.

In principle, the haplotypes of the genus R1a could have been brought to Arabia by slaves brought to those lands four thousand years ago. But historians should already answer this question. In the light of the latest data on the R1a haplotypes among Arabs, this becomes extremely unlikely. The most famous and high-ranking clans have carriers R1a.

The literature has published a series of haplotypes from Crete. They were collected from the inhabitants of the Lasithi plateau, where according to legends their ancestors escaped during the eruption and explosion of the Santorini volcano 3600 years ago, and the rest of the haplotypes were collected in the adjacent territory of Heraklion Prefecture. The calculation of the lifetime of a common ancestor in Crete was carried out by us in several different ways, but the result is the same - 4400 years ago. Respectful 800 years before the explosion of the Santorini volcano. This value corresponds to the average European settlement times of the genus R1a.

The DNAs of our contemporaries show that the most ancient European roots of the Aryans, the genus R1a, the 10-9 prescription, are thousands of years old in the Balkans - in Serbia, Kosovo, Bosnia, Croatia, Macedonia. After 5000-6000 years, this genus will expand to the northeast, to the Eastern Carpathians, forming the pre-Slavic, Tripoli culture and initiating the great migration of peoples in the 4th-3rd millennia BC. At the same time, the genus R1a advanced both along the southern arc and 4300 years ago - according to the records in our DNA - appeared in Lebanon.

As part of this resettlement, apparently caused by the development of agriculture and the transition to its extensive forms, as well as the development of the economy, the same genus R1a advanced westward, to the Atlantic and British Isles, and northward to Scandinavia. The same genus came to the near north and east - to the lands of modern Poland, the Czech Republic, Slovakia, Ukraine, Lithuania, Belarus, Russia, with a common common Slavic ancestor who lived 4800 years ago.

This same ancestor gave surviving offspring, now living throughout Europe, from Iceland to Greece and Cyprus, and spreading to the south of the Arabian Peninsula and the Gulf of Oman.

The descendants of the same ancestor, with the same haplotype in DNA, passed to the southern Urals, built there fortifications 4000-3800 years ago, one of them (opened at the end of 1980-s) became known as Arkaim, and under the name of the Aryans went to India , bringing there the 3500 years ago their Proto-Slavic haplotypes. In the same II millennium BC, a rather large group of the genus R1a, also calling itself Aryans, moved from Central Asia to Iran.

This is the only but significant link that allows you to call the whole genus R1a a genus of Aryans. It also leads to the identity of "Indo-Europeans", Aryans, Slavs and the genus R1a in the framework of DNA genealogy. She, this bundle, places the ancestral home of the “Indo-Europeans”, the Aryans, the ancient Slavs in the Balkans. The same bundle brings into correspondence the place of the Balkan European "ancestral homeland", the flow of Aryan-Pra-Slavs migration, the dynamic chain of archaeological cultures and the corresponding flow of Indo-European languages, and shows the place and time of appearance of the "Indo" particle.

Only the concept of “ancestral homeland” here is not a language ancestral homeland, but the supposed place of arrival of R1a carriers in Europe, and from there already spread across the continent. For R1a in a broader sense, this, of course, is not a “homeland”. In general, the search for "ancestral homeland" for migrations and languages ​​in their dynamics over many millennia and at distances of many thousands of kilometers is a hopeless and unpromising occupation, but for some reason incessant. Inertia?

True, many linguists define the "ancestral homeland" of the Indo-European language not as the birthplace of the language, but as its divergence into branches, and they are trying to figure out from which single archaeological culture it came.

This occupation is not less hopeless, since the discrepancy between Indo-European language, calling it Pro-Indo-European or Proto-Indo-European, occurred all the time during the very 20 thousands of years of the RHNUMXa haplogroup, and in fact much earlier, again in the dynamics of the language over the last 1 -60 thousand years, since the appearance of Caucasians. And not only discrepancy - divergence, but also merging-convergence, and many other seemingly disorderly language processes.

Finally, the same bundle described above, which makes it possible to call the entire genus R1a a genus of Aryans, convincingly shows that not Proto-Slavs spoke “Indo-Iranian” languages, but, on the contrary, the descendants of Proto-Slavs brought their Aryan languages ​​to India and Iran, and the times when these languages ​​appeared in India and Iran, established by linguists, are completely consistent with the time of arrival of descendants of the Slavs there - the time recorded as mutations in the DNA of our contemporaries of the genus R1a. This is about 3500 years ago, but these are the times when languages ​​appeared in India and Iran, the languages ​​themselves were formed much earlier, as described above.

Apparently, the divergence of the Aryan language into “Indo-Aryan”, “Iranian”, and the language of the Mitanni Aryans, “Middle Eastern”, occurred when the Aryans diverged in these directions from the Russian Plain, about 4500 years ago, in the middle of the 3rd millennium BC. But migration flows (or military expeditions) diverge rather quickly, and the language is a conservative matter, so the divergence of the languages ​​themselves can be dated about 4000 years ago.

By the time the Aryans moved to India and the Iranian plateau, about 3500 years ago, the languages ​​had already diverged enough to form the indicated branches of the Aryan language.
But how did the genus R1a get to the Balkans, and from where? With the "ancestral homeland of the Indo-Europeans", which turned out to be the Aryans, they are the same-Slavs, we figured out. And where is the "ancestral homeland" of "Proto-Indo-Europeans"? When and where did Nostratic languages ​​originate, if this is not the accepted name? What is the current picture of flows, migrations of “Proto-Indo-Europeans”, which led to the appearance of the Aryans, the Slavs on their historical homeland? About this a little later.

Ctrl Enter
Noticed oshЫbku Highlight text and press. Ctrl + Enter
We are
Professor Klesov: “Russian roots have been found. Nightingales of the Information Russophobic War ConfoundedA sensation from geneticists: the pro-Slavs came to India, and not vice versa
Military Reviewin Yandex News
Military Reviewin Google News
47 comments
Information
Dear reader, to leave comments on the publication, you must sign in.