Torn to shreds. Dreams of European integration and harsh reality

30 2016 June
52
An endless series of scandals pursues Ukrainian patriots on the way to the European Union. The inability and unwillingness of Ukrainians to establish relations with representatives of other states is manifested at all levels, from diplomatic to household.

Why is this happening? Why Europe does not want to comprehend the mysterious Ukrainian soul? Because of what any attempt to establish contact with the EU turns for Ukraine with another leap on a rake? The answer to these and other questions is much easier than it seems at first glance.

The latest significant failure of the Ukrainian patriots was an attempt to demonstrate national self-consciousness in the Polish city of Przemysl (https://www.ridus.ru/news/224835.html).

It is the appearance of the protesters decided the fate of the event. March with embroidery and red and black flags of the UPA ended "a little predictable." The local population did not want to share the philosophy of Ukrainian nationalism and responded proletarian to the Galitsai parade.

Despite the fact that Polish fans took an active part in the incident, the carnage had nothing to do with football. The cause of the fight is much more serious: the supporters of Stepan Bandera caused too much evil to the Eastern European peoples.

Historical the wound is still bleeding. This is eloquently evidenced by the fact that instead of fan chants the Poles chanted “There will be a stick on the Bandera snout!” and "Bandera - get out of Poland!"

"Kremlin agents are to blame for everything"! - This was exactly the first reaction in the Ukrainian media to the message about the incident in Przemysl. The main agent, according to the ukronet, was the Polish journalist Tomasz Maciejczuk, who covered a high-profile event. The fact that Tomash himself, to put it mildly, is not a fan of either Russia or the Kremlin in particular, adds the acuteness of the situation.

As for the fight in Przemysl, its reason is much more prosaic than Moscow’s ecumenical conspiracy against Ukraine: 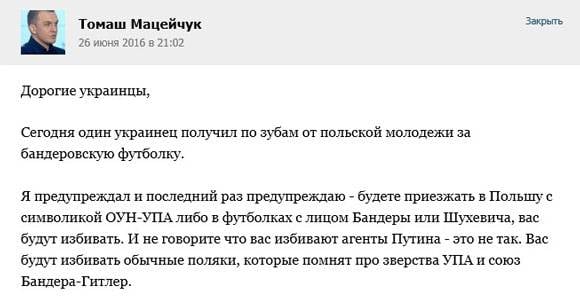 It is the Ukrainian policy of historical memory that causes hatred among the population of Eastern European countries. Self-identification of Ukrainians with flayers from the UPA excludes their membership in the "friendly family of European nations."

Ukrainians want to be welcomed in the EU with open arms. However, it is unlikely that anyone will agree to live with people who justify murderers and sadists, blaming the blame for the inhuman crimes on the victims.

Poroshenko's regime does not consider the atrocities committed by the Bandera bastards of civilians a crime. However, such an interpretation of events does not naturally suit the Europeans, who are well aware of the obsessive peculiarities of the Ukrainian nationalists to be proud of the “feats” of their predecessors.

No more rock and roll

The consequences of the ill-conceived and inadequate policies of the Ukrainian authorities can be seen with the naked eye. Even those countries that, after the coup of 2014, supported Ukraine, today are turning away from Kiev.

Of course, it is naive to suppose that Polish, Hungarian or Romanian politicians are so much worried about Ukrainian views on history, but they are forced to listen to the population of their own countries. And the population does not want to live with red-black ghouls.

In the eyes of ordinary Romanians, Hungarians and Poles, Ukraine today is not a pretty girl in embroidery and a wreath of wild flowers from Ukrainian propaganda posters. For them, she is an embittered youngster who suddenly emerged from the caches, who is struggling to break through the back door of their still cozy European house.