23 2016 June
63
Today, June 23, a referendum on the state’s membership in the European Union started in the UK. Britons have to answer historical question: “Should the United Kingdom remain a member of the European Union or withdraw from the European Union?” Case studies show that the number of opponents and supporters of Brexit is approximately equal. One manifestation of the likely victory of the supporters of the exit was the massive purchase by the British of gold, and along with safes: people are afraid of the collapse of the pound. 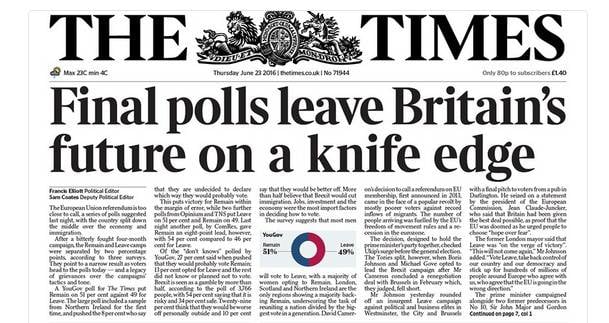 The latest poll by YouGov, conducted before the referendum, showed a slight preponderance of opponents of Britain’s exit from the EU. As pointed out on Twitter, the deputy head of the politics department of The Times, Sam Coates, according to this poll, 51% of residents will vote against leaving the EU. In favor of the same measures favored 49%. However, a previous survey showed an advantage to Brexit supporters, notes RBC.

According to TNS Omnibus (22 June), 43% were ready to vote for exit from the EU, but only 41% were against. The number of undecided was 15% of respondents.

There are other data. A telephone survey conducted from 17 to 22 in June, ComRes for the Daily Mail and ITV, showed an increase in the number of Brexit opponents, reports "Lenta.ru".

According to this study, 48% of the British are for UK membership in the EU, 42% are against, and 10% could not decide yet.

The previous ComRes survey estimated the gap between Brexit supporters and opponents by just one percentage point.

EU officials make vigorous statements. For example, the chairman of the European Central Bank, Mario Draghi, at a hearing at the European Parliament said that the ECB was fully prepared for a possible British exit from the European Union.

"The ECB is ready for any unforeseen circumstances after the referendum on UK membership in the EU," Draghi said. RBC.

However, he immediately noted that Brexit could have "significant economic consequences."

RBC makes some predictions on this.

According to the British Ministry of Finance, independence from European bureaucrats could cost the United Kingdom 9,5% of GDP.

Well, J. Soros, in the event of a country's withdrawal from the EU, predicts the fall of the pound sterling stronger than in the “black environment” of 1992 of the year.

Meanwhile, the British rushed to buy gold, and at the same time home safes for the storage of ingots. People are afraid of the collapse of the pound sterling after the country's withdrawal from the European Union. He writes about it "Lenta.ru" with reference to The Telegraph.

The Ribbon provides information from the Royal Mint. According to this information, sales of gold bars and coins jumped by 32% over the past month. The most popular among the population now are Britannia gold coins, as well as “gold subscriptions”: the latter allow you to buy this precious metal in quantities less than one ingot.

Experts do not advise people to buy bars: firstly, their prices are too high, and secondly, they can be lost in case of theft. It is better to invest in investment funds specializing in precious metals.

Lenta also cites the opinion of Societe Generale analysts on another aspect of the impact of a possible British exit from the EU. Experts say that global oil prices may fall by 5% due to Brexit. True, the decline will be short.

Curious in this regard, the recent statement by British Prime Minister David Cameron: a month ago, he said, recalls Utro.ruthat a British exit from the European Union could bring happiness to Vladimir Putin.

Hardly any major Russian experts in finance agree with Cameron.

The possibility of Britain’s exit from the EU is already affecting the Russian economy and budget: instability in the oil market is increasing, said Russian Economic Development Minister Alexei Ulyukayev at the SPIEF. "Therefore, for us, this would mean greater volatility and additional problems," he says, "Morning."

The opinion on this account of the head of Sberbank German Gref is also known. He believes that in the event of a victory in a referendum of Euro-skeptics, markets will be panic-stricken. It will negatively affect the Russian economy, the ruble rate and the mood of investors (those who invest in Russian securities). The banker admits that the Russian stock market may lose 5-10% of value. Similarly, Brexit will affect Russian bonds. Finally, Russian GDP risks falling by 0,5-1%.

But Russia is unlikely to be the main victim. According to Alexey Kaminsky, a leading strategist at the Aton investment company, the markets of Spain, Italy and Portugal will be under the main blow. “Their stock indexes could fall by 20-25%. European index EuroStoxx 50 and English FTSE 100 - on 10-15% ", - quotes him RBC.

But with gold everything will be fine, it is not for nothing that the British are buying it: in addition to US treasury bonds and bonds of Switzerland and Japan, Kaminsky points out, gold will turn out to be positive - “as one of the traditional“ safe havens ”during periods of heightened volatility.”

On the consequences of a possible exit of Britain from the EU as a whole, the senior researcher at the Bruegel Economic Research Center Zolt Darvas spoke. He believes that, with Brexit, eurozone GDP growth may be a few tenths of a percentage point less than previously predicted. "That is, on the 0,1-0,2 the percentage point below," he says. RIA News". - But I do not think this is some kind of dramatic phenomenon. I am not as pessimistic as many others. After all, Britain, even in the event of an exit, will remain in the EU for another 3-4 of the year, and this is quite a long transition period. And I believe in reaching agreements on (preservation. - Ed.) UK access to the single EU market. The eurozone is a very large economy, the United Kingdom is its important trading partner, but only one of its trading partners. And the turbulence in the financial markets will survive. ”

Russian experts believe that a probable Brexit could theoretically be the reason for similar demarches of a number of EU states.

“At a minimum, this can give additional weight to the threats of those countries that are trying to bargain for themselves some kind of preferences, threatening to withdraw. However, it’s impossible to say that now there are some countries in the EU “collecting belongings”, ”said Yaroslav Kabakov, deputy general director of Finam, told the agency.

According to the expert, most countries see for themselves certain reasons for which membership in the EU is preferable. “But risks still exist, for example, on the wave of economic problems and an influx of refugees, right-wing parties may come to power, including the idea of“ restoring sovereignty ”is not an empty phrase,” he notes. “And, once in power, they may at some point make a decision on withdrawal in order to demonstrate a strong policy.”

Supporters of voting for exit claim: the bureaucratic European Commission restricts business development; Contributions to the EU budget deprive the UK of funds that can be spent on health care, education, etc .; outside the EU, you can tighten control over migrants; without the EU, more lucrative bilateral trade agreements can be concluded.

In the camp of Brexit supporters are the Muslims for Britain movement, the former Mayor of London Boris Johnson, the founder of Superdrug Peter Goldstein, the managing director of Goldman Sachs David Sismi and others.

Arguments of opponents Brexit: exit from the EU will hit the country's image; European integration gives British businesses ample opportunities; the influx of highly qualified foreigners increases the competitiveness of the economy; Britain will leave the elite of the financial world, will go and investment.

The Bremain representative camp (the British remain, "Britain remains") is headed by Prime Minister D. Cameron and most of the members of the government, the new Mayor of London Sadiq Khan, businessmen Vittorio Colao ("Vodafone"), Paul Kahn ("Airbus"), Roger Carr ( "BAE Systems") and others.

What can the British expect if they still vote in the majority for Brexit?

It’s difficult to predict: nobody has ever left the EU. One thing is clear: protracted negotiations will begin between "free" London and the "supranational authorities" of the European Union. Not to avoid negotiations with the ECB. It can hardly positively affect the economy. And the Scottish Question will also escalate. The fact is that 21 Jun. Nicola Sturgen, the leader of the Scottish National Party, said that if the UK leaves the EU, Scotland will hold a second referendum on secession from the United Kingdom. According to Sturgen, most Scots want to save the state in the European Union.