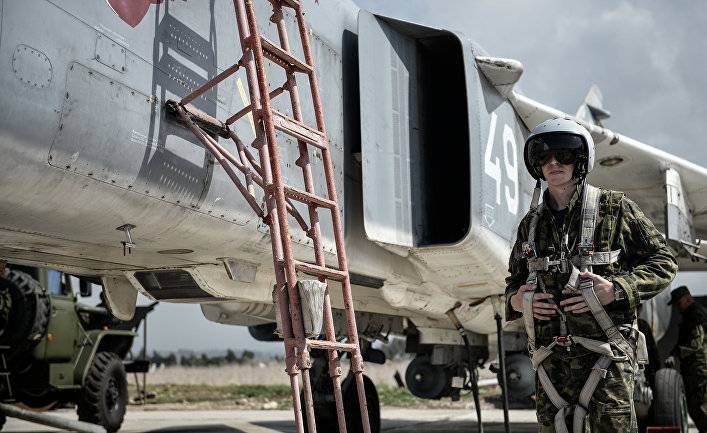 Summary
Whether it was a plot to force the United States to coordinate its actions, or an attempt to weaken a potentially dangerous rebel organization, but Russia took a bold step in Syria a few days ago. A Russian plane struck the US-backed “New Syrian Army” in the Al-Tanfa region, the border crossing on the Syrian-Iraqi border, in the region of the Jordanian border. Russia denied having bombed the area, despite the video evidence of the damage and the remnants of the Russian cluster bombs in place. The United States described how fighters raised to drive away the Russian Su-34 bombers, who then returned and resumed the bombing when American planes flew off to refuel. No matter how it is evaluated, but the move from the Russian side was bold.

Analysis
The Russian and allied Syrian government forces are constantly bombing rebels supported by the United States. But before the incident in Al-Tanafe, these attacks were not directed against groups that fight exclusively against the terrorists of the “Islamic State” (banned in the Russian Federation), like the “New Syrian Army”. A relatively small structure, prepared and armed mainly by the United States, Britain and Jordan, the New Syrian Army is fighting near the Jordanian border in southeastern Syria in the hope of taking more territory in the direction of Deir al-Zora.

The coalition often supports the “New Syrian Army” from the air, and the British and Jordanian military often assist them as advisers, so Russian bombings could provoke an escalation of tension. But Russia had very serious reasons to make these strikes, despite the danger. Russia is trying to force the United States to cooperate with its troops from the very beginning of its intervention in the Syrian civil war. She joined negotiations on a peaceful settlement in Syria in the hope of starting a process that could lead to mutual understanding with the United States on other issues, including sanctions and conflict in Ukraine. And if Moscow can get direct cooperation from the United States with its own forces and government troops, this will mean that Washington recognizes the government of Bashar al-Assad.

But the United States categorically refused to do anything more than measures to defuse tensions or expand the Syrian peace talks. At the moment, Moscow seeks to contact with Washington in all available ways. Russia enthusiastically supported the government offensive against Rakka to attract US attention. Strikes against the positions of the “New Syrian Army” have become another means, albeit a risky one. And, perhaps, they brought the desired result: 19 June Russia announced the expansion of coordination with the United States in Syria. Earlier, the United States refuted such unilateral statements, and now they have not yet confirmed the Russian statement.

There is another likely reason for these bombings. Despite being relatively small, the New Syrian Army represents a potential threat to government forces in eastern Syria, especially in Deyir al-Zor, from where many of the fighters from this grouping come from, and where they have connections. Attacks on the New Syrian Army are unlikely to cause serious damage. On the contrary, after the strike, she achieved a new success, capturing Az-Zubeida on the Iraqi border 20 June. But Russian bombing is able to undermine the morale of the group and adversely affect the ability to mobilize new fighters, questioning the ability of the United States and its coalition to defend the group.

Whatever the true reason for Russia's recent risky actions in Syria, the potential value of such steps will only increase. In contrast to the situation in western Syria, where fighting continues between rebels and government forces, in the east, the territories seized by ISIL constitute a buffer between Russian-supported and US-supported forces. This allowed the United States and its allies to join forces with the "Syrian Democratic Forces" and the "New Syrian Army", practically without fear of the Russian allies. But US-backed forces are moving towards Russian-backed detachments, using the weakness of ISIL, and they risk direct contact with each other. Since there are factions on opposite sides that have been at war with each other for a long time, it will be a very difficult task to prevent escalation even in the best of circumstances. The Russian bombing positions of the New Syrian Army showed how heavy it can be.

Ctrl Enter
Noticed oshЫbku Highlight text and press. Ctrl + Enter
We are
Syria: the rebels do not give up because they do not want to dieExercises "Impudent Alligator - 2012"
Military Reviewin Yandex News
Military Reviewin Google News
64 comments
Information
Dear reader, to leave comments on the publication, you must sign in.