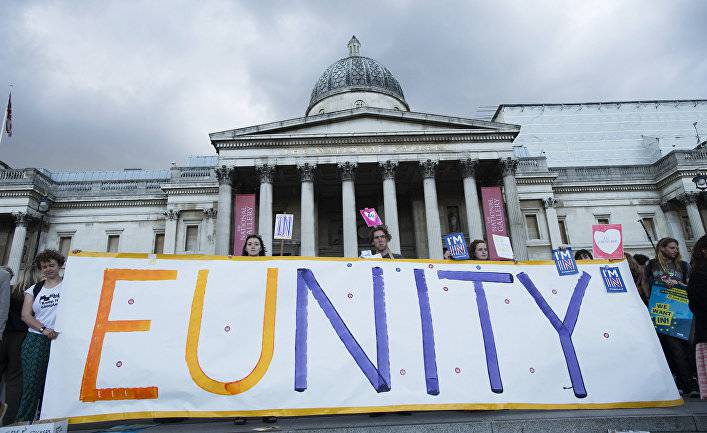 Brussels Eurocrats held their breath before the decision on Brexit, which the British should take on Thursday. Result will have historical significance for the “European project”.

It is often said that the EU will emerge from the crisis stronger. But such a conclusion can hardly be made if the British, the citizens of the first member state, decide to leave the EU.

Many believe that the EU, in the event of Britain’s exit, will be subjected to the most serious test in the 60 years of the union’s existence.

The threat of Western civilization

The President of the European Council, the Pole Donald Tusk, went further than anyone else in the description of the “disaster”. In an interview with the German newspaper Bild, Tusk states that Brexit will be the beginning of the end not only of the EU, but of the entire Western political civilization.

According to the comments of leading EU politicians, the UK will be severely punished if it decides to exit.

The British will suffer for their choice if this choice is “Leave”. The answer will be tough, not least to show other countries what awaits them in the event of a withdrawal. Therefore, the British are promised seven long years of uncertainty and negotiations on their future relations with the EU and on access to an important domestic market.

Britons have to pay dearly for Brexit

If the UK uses the 50 clause of the treaty governing membership of the union itself, then two phases of negotiations will follow.

First, within two years, it will be necessary to work out the terms of the divorce, which must be approved by 27 by the remaining EU members. Only after that the EU will be able to begin negotiations on a trade agreement with the UK, which is not a member of the EU, and this process can be delayed for many years.

There is no question of giving the UK the opportunity to stay on the EU internal market.

“The day after that there will be no desire to be“ nice ”with the British,” said Camille Grand from the French organization Foundation for Strategic Research. The British have to pay dearly, not least in order to keep others from taking the same step, ”she says.

Same value as the fall of the Berlin Wall

Nevertheless, Brexit will strongly inspire euro skeptics in other participating countries. The leader of the French far-right party, the National Front, will be among those whom Britain’s decision will please.

Marine Le Pen (Marine Le Pen) has already compared the possible exit of Great Britain from the EU with the fall of the Berlin Wall. And she promises to work to achieve the same plebiscite in France.

There is no doubt that Brexit will shake the EU to its foundations.

“Brexit can cause a domino effect, as a result of which the EU will collapse,” says Mark Leonard, director of the European Council on Foreign Policy.

“The EU will look like a destroyed project, a great power in ruin,” says Leonard.

Others believe that Brexit could breathe new life into the processes of general security policy, which were hampered by the British.

“In addition, cities such as Paris, Frankfurt and Luxembourg can establish themselves as financial centers after London has lost its role as the financial capital of Europe,” said former Polish Foreign Minister Radoslaw Sikorski told New York Times.

Many analysts point out that for the fact that the Union does not have popular support in many member countries, the EU can blame itself. The EU has only recently emerged from the economic crisis that began in 2007-2008, and unemployment is still 10%.

The introduction of a common currency, the euro, was partly a bad decision, because the economic conditions in the countries of Northern and Southern Europe vary greatly. As a result, poor countries like Greece were bogged down in bottomless debts and were only saved at the last moment.

Recently, the EU has undergone new tests related to the migration crisis, which has become the breeding ground for right-wing populist parties, in particular in Austria and Hungary.

Brexit will cause Britain damage, especially in the economic sphere, but the loss of one of the most important member countries will cause great damage to the EU itself.

In the capital of the EU, there is a feeling of helplessness, writes the online edition Politico, which closely monitors the events of the internal life of EU organizations. Eurocrats feel that they are not able to influence the situation, and that they can only wait for results.

“No one among those who care about the fate of the EU will sleep on Friday night,” says European Parliament member David McAlister.

Ctrl Enter
Noticed oshЫbku Highlight text and press. Ctrl + Enter
We are
The Second Breath of the Black KnivesSituational analysis of the death of the MH17 flight (Malaysian Boeing 777), made on the basis of engineering analysis from 15.08.2014
Military Reviewin Yandex News
Military Reviewin Google News
53 comments
Ad