Education, where are you rushing? .. About 40% of "excellent students" at the exam in mathematics

22 2016 June
252
The last June decade is in the yard, which means the time for summing up the Unified State Exam, the time of graduation balls, and also the time of official reports from education about the direction in which the level of competencies of Russian graduates moves in comparison with previous years.


So, about the reports ... Here, as usual, everything is truly great. On the official portal of the Unified State Exam externally positive news overwhelmed each other.

Rosobrnadzor: the number of failed exam in 2016 year has halved.

Getting acquainted with the materials presented on the site, you can learn a lot of interesting things. A lot ... It turns out that Russian mathematical education again "storms beyond the clouds", so much so that in the overwhelming majority of cases the basic exam in the "queen of sciences" on the "good" and "excellent" writes the vast majority of 11-graders. No joke ... Everything is quite serious. Press Service of the Rosobrnadzor 16 June of this year publishes a message in which it says that the “basic math” on 5 points passed (attention!) to almost 40% (or more precisely - 39,4%) of Russian graduates.

40 PERCENT REMARKS ON MATHEMATICS !!! Against the background of such a result, even the Soviet school of mathematics, as they say, nervously smokes on the sidelines ... Literally every second graduate is either Perelman or Kolmogorov ...

From a statement by the chairman of the federal commission of developers of measuring measurement materials (in other words, assignments for the Unified State Exam) in mathematics Ivan Yashchenko:

We see that more prepared applicants will come to universities this year.

After such a statement, I want to ask a question: Ivan Valerievich, you, of course, are a respected person, but since when did you decide to troll so thickly the level of training of a modern Russian graduate? Tell me, what kind of mega reserves are there in the domestic, sorry, to all the places of the reformed education system have opened, that we already have 40 eleventh-graders out of a hundred in the exam in one of the most difficult subjects of the school program receive excellent grades?

And Ivan Valeryevich Yashchenko, the person who took the most direct part in the development of the very KIMs (tasks) for the USE, it’s time to admit to himself that his trolling is really thick, and that the system of control measurement tasks with each subsequent year It is built so that at least 1%, but to cover the results of the previous year. Otherwise, there will be drawbacks in the reporting documentation, indicating a drop in the “level of training”, and for officials it’s like a knife in one place ...

If the task bias for the exam in the direction of explicit primitivization persists, then there is a version that in 5-6 the number of “mathematical” (and not only) excellent students in our country will not even 40, but all 80 percent. Why are there eighty ... Give all 100%! 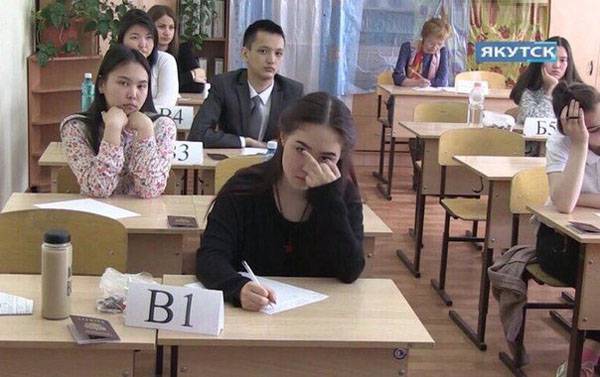 To, so to speak, plunge into the mathematical "thorns" of the modern basic Unified State Examination are a few recent examples from the CIM:
Fractional Task:

When you familiarize yourself with this task, the question again arises, is it exactly an exam for 11 students of the school class, or is it a question of examining the fifth or sixth grade? ..

Here are some more examples:

And this is from the “more complicated” series (“practically uncountable” ... integral calculus cannot be compared in any way ...):

Well, almost Lenin's "step forward, two steps back", if you do not take into account the philosophy that "forward" for a snail, and that "back" for a snail ...

With this type of assignment for 11 grades, the math exam turns into something formal. Moreover, with such an approach to the examination tasks of even the above-mentioned 5-6 years to achieve the 100% of “excellent students” in mathematics, it seems, a bit too much. In order to improve the "quality" of school education, in their reporting compilers of KIM and representatives of the Federal Service for Supervision of Education of the Year through 2-3 will have to enter into the EGE set the tasks from the elementary school mathematics ... Masha has one apple, Petya has two pears - how many fruits do children have? ..

In general, the USE, as they are trying to convince us, is extremely beneficial - and children, on the basis of knowledge about how long the snail will be at the top of the tree, enter higher educational institutions.

But the results of such a unified state examination today are also becoming an instrument of competition between schools.
Marivanna: I have 30 honors from 55.

But, as they say, the unified state examination is not the only one ... It is not only by the results of the exams that modern schools “measure up”. The other day ia TASS published a remarkable material, which provides data on how much money the family of schoolchildren in different regions spend on graduation balls. So, in St. Petersburg, “graduating” from school costs about 20 thousand rubles (this is an average of one of the gymnasiums), but on Sakhalin there are frequent cases of graduation balls for 80 thousand per person ...

From TASS material (the words of the mother of one of the graduates):
Everything depends on the status of the school (lyceum, gymnasium or simple school), its location (city or suburb), and of course, on the number of children in the parallel or class. For example, my son is studying in a school in the village of Dalnee (a suburb of Yuzhno-Sakhalinsk). We have one 11 class, in which 13 guys. The cost of the services of the animator (regardless of the number of children) - 40 thousand rubles, DJ with light music - 20 thousand. And in the third gymnasium - 90 graduates, respectively, these services for them are almost an order of magnitude cheaper per person.

Animators, DJs, neon jungles, white limousines with champagne. What else? Order strip, hookah halls, tasting in the wine cellar? Everything - for graduates walking towards adulthood ...

An entire business empire revolves around schoolchildren, ready to offer services ranging from symbolic gifts to teachers and modest hairstyles and dresses to “gifts” to the school in the form of furniture and expensive classrooms (classrooms). And expensive "gifts" - exclusively, you know, voluntarily ... Well, if the school helped prepare so that the child could solve the problem of the cochlea on the USE, so some parents are ready to "voluntarily" roll for the sake of such a budget organization of the mountain ...

Against this background, the information that Russian schoolchildren won the international Olympiad in mathematics and IT or demonstrated a high level of knowledge during a different tournament of intellectuals is perceived, unfortunately, not as a completely ordinary event for our country, but as something that happens contrary to, than thanks ...

Ctrl Enter
Noticed oshЫbku Highlight text and press. Ctrl + Enter
We are
Results of the week. “Hey you crazy, stay!”USE as a mirror of the modern education system
Military Reviewin Yandex News
Military Reviewin Google News
252 comments
Information
Dear reader, to leave comments on the publication, you must sign in.