June 22 - Day of memory and grief. 75-th anniversary of the beginning of World War II

22 2016 June
57
20 time stories Russian Federation, the date 22 June is celebrated as the Day of Memory and Grief. The calendar of mourning dates under this name 22 June was marked by decree No. 857 of the President of the Russian Federation (at that time Boris Yeltsin) from 8 June 1996 of the year - as the day of the invasion of the German fascist troops into the territory of the Soviet Union.


The full text of the said decree:

Twenty second June 1941 of the year - one of the saddest dates in our history, the beginning of the Great Patriotic War. This day reminds us of all the dead, tortured in fascist captivity, dead in the rear of hunger and deprivation. We mourn for all those who, at the cost of their lives, fulfilled the sacred duty of protecting the Motherland.
Paying tribute to the memory of the victims of the Great Patriotic War 1941-1945, as well as the victims of all wars for the freedom and independence of our Fatherland, I decide:

1. Establish that June 22 is Day of Remembrance and Grief.
On the Day of Memory and Grief throughout the country:
the State Flags of the Russian Federation are being lowered; in cultural institutions, on television and radio, entertainment and broadcasts are canceled throughout the day. 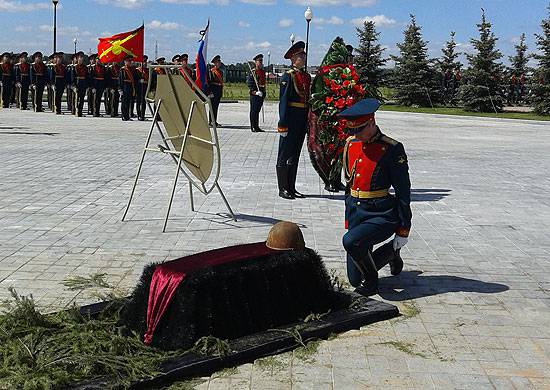 And after 75 years after the start of the Great Patriotic War, professional military historians cannot draw an unequivocal conclusion about the losses suffered by the Soviet Union in the confrontation with numerous invaders that crossed the borders of the Fatherland. Data on combat losses at the front are often superimposed on reports of civilian casualties in the Nazi-occupied territories. The total number of losses in the bloodiest war in the history of mankind suffered by the Soviet Union from 22 June 1941 to 9 in May 1945, more than 25 million people. These are fighters who fell on the battlefield and died from wounds in hospitals; these are civilians who faced the horror of Nazism from Brest to Stalingrad, from Murmansk and Leningrad to Sevastopol.

What is 25 million losses? These are tens of millions of new lives that have not been born, millions of grief-stricken and marginalized families, and this is a huge economic, humanitarian, and social damage that all of our vast country and all its peoples have suffered. What is 25 million losses? At least partially, this value allows us to illustrate the remarkable action “Immortal Regiment”, which is held annually not only in Russia - thousands and thousands of passing tablets with people killed in the battles for the Motherland. Moreover, the action "Immortal Regiment" is not only memory and grief, it is, first and foremost, pride in the feat that our ancestors made, and which we all must be worthy.

For a long time in Soviet history it was not accepted to report that Hungarian, Finnish, Slovak, French, Bulgarian, Italian, Romanian and other formations came to fight against the Soviet people together with the German armies. Now Russians know about the real price of the so-called “partnership”, when calling themselves friends today are sometimes not ready to lose their chance to plunge the knife into the back tomorrow, hoping to tear a tasty piece from Russia under any far-fetched pretext. That is why the phrase that Russia has only two ally - the army and the navy - has already been one of the mottos of the existence of a sovereign Fatherland for more than a century.

Three years ago - on the Day of Memory and Grief 22 June 2013 of the Year - the Federal Military Memorial Cemetery (FVMK) opened in the Mytishchi district of the Moscow Region. One of those who attended the opening ceremony of the facility was Russian Defense Minister Sergei Shoigu. From his speech at that time:
Today we are opening the Federal War Memorial Cemetery. This event of national importance is timed to the Day of Memory and Grief. 22 June 1941 of the year - one of the most tragic dates in the history of the country. For centuries, the memory of the defenders of the Motherland, who sacrificed their lives for the freedom and independence of the state, was perpetuated in Russia. This is our homage to the fallen heroes. “The uniqueness of the FVMK is not so much in its scale as in the fact that it is intended to become a place where the memory of outstanding citizens of our country who have special services to the Fatherland will be preserved. I am sure this place will become sacred for the Russians. 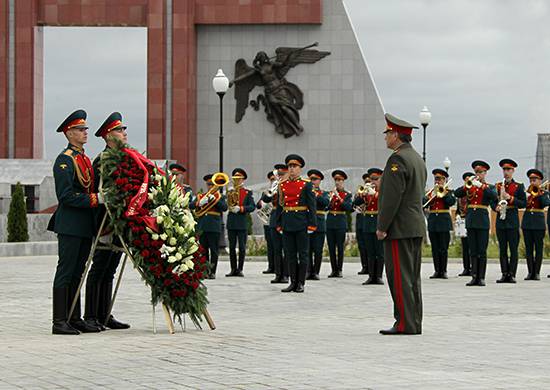 At the monument "Grief" was eternal flame.

The eternal flame is one of the main symbols of the memory of that unprecedented feat, which was accomplished by the Soviet people during the years of the Great Patriotic War. But an even more significant symbol for all of us is our own awareness that we are descendants of a great generation of people who have managed to defend the country with their courage and heroism. It is their blood that flows in our veins, and our memory of their Victory is the best gift to all living veterans, and to those who are no longer with us.

We will be worthy!

Ctrl Enter
Noticed oshЫbku Highlight text and press. Ctrl + Enter
We are
April 11 celebrates the International Day for the liberation of prisoners of Nazi concentration campsDay of the defeat by the Soviet troops of the German fascist troops in the Battle of Stalingrad
Military Reviewin Yandex News
Military Reviewin Google News
57 comments
Information
Dear reader, to leave comments on the publication, you must sign in.