Ukrainian air defense will be on the Belarusian chassis 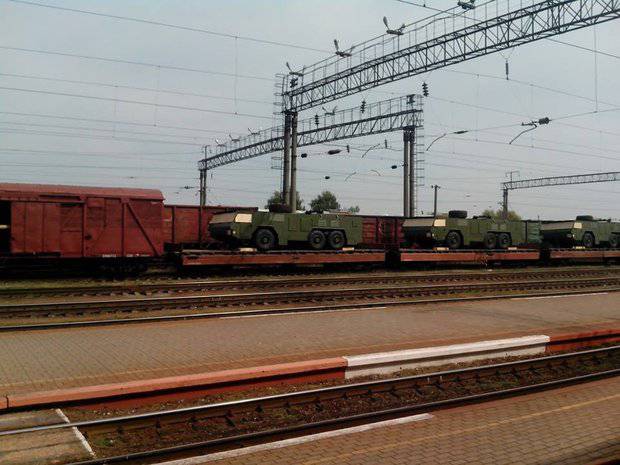 June 14 in the media leaked information about the delivery of the Minsk MZKT-6922 chassis to Ukraine. A train with transport bases for the air defense system was seen at the Ukrainian railway station Korosten, which is located fifty kilometers from the Belarusian border.

According to the author of the material, combat vehicles are delivered for the S-Tlet X-NUMX “Stilet” air defense system (a joint Belarusian-Ukrainian development) and through Ukraine follow the transit to a supposedly third-party customer.

However, one should not forget that the MZKT-6922 chassis can accommodate not only the Stilett T-38 air defense systems, but also a number of other types of weapons, such as the Osa, Buk, Tor systems and the AZ . The wheel chassis of the MZKT-6922 are, in principle, universal and may well be used to house the Ukrainian Dnepr air defense system or the Grom missile system developed by the Yuzhnoye design bureau. Moreover, the Minsk plant is a manufacturer of wheeled chassis of different classes and capacity ranges, which allows you to install on these platforms not only small and medium radar SAMs, but also long-range air defense systems.

So do not rush to draw conclusions about the destination of the chassis, especially given the deplorable state of the air defense system of Ukraine and the urgent need to modernize and update it.

To date, the Soviet army is armed with Soviet medium-range anti-aircraft missile systems C-300 of the PT or PS and Buk-M1 systems. But in spite of the fact that the service life of the air defense missile system was repeatedly extended, they are able to repel an attack only on paper. Kiev is well aware that the “anti-aircraft umbrella” is outdated and worn out, and all attempts by the Ukrainian “defense” to create a missile system solely on its own have proved to be a failure.

That is why we can assume that the universal Belarusian chassis for heavy weapons in Ukraine were not accidental and certainly not transit. In fact, the Ukrainian army expects to update its air defense system, including with the help of the Belarusian MZKT.

In addition, the close cooperation of Kiev with Minsk has already borne fruit - the Ministry of Defense of Ukraine buys MAZs for the army from Belarus and, moreover, the assembly of the army modification of MAZ in Cherkasy has begun. In addition, some analysts believe that Belarus has not only financial interest in Ukraine. About the Ukrainian roots of the Belarusian cruise missile "Stork" speak for a long time. So it is possible that with the help of our closest allies, not only anti-aircraft missile systems of various radius of action, but also ground-based cruise missiles, which can be directed against us, will soon be in service with the Armed Forces of Ukraine.

Interestingly, even in such a difficult situation, Lukashenko manages to maneuver favorably - now he has become not only a security donor in the region, but also import substitution donor for quarreled neighbors.

However, Belarus doesn’t supply Ukraine with a lethal weapon to blame its closest ally (although the Kremlin itself is actively arming Armenia’s ally and partner with Azerbaijan), and the Minsk chassis and MAZs for Kiev are only the result of forced diversification to which of our military industrial complex to adjust the entire production cycle of similar MZKT bases at home, thereby leaving the closest ally without a piece of our state defense order. But who is doing worse? Removing Belarus from our market, we force it to look for new partners. With this approach, if Ukraine makes a more profitable offer for Belarus, we risk leaving our nuclear shield without wheels. It may be enough to look for traitors among its allies, or even lose them.