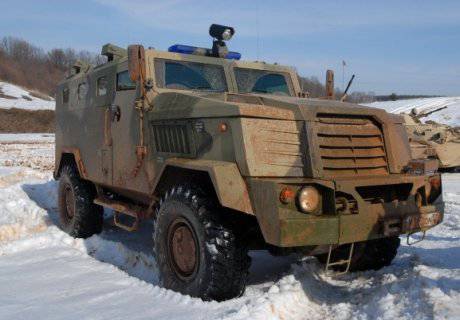 In the near future, it is planned to replace a significant part of the BTR park of internal troops with new specials. police cars SPM-3 "Bear". D. Galkin, General Director of Military Industrial Company (MIC), spoke about this in an interview with RIA.News".


The CEO noted that at the moment it is not clear how many "Bears" will make an order. Galkin, however, stressed that a certain number of armored personnel carriers would still remain in service with this kind of troops, since it was the combination of the BTR and SPM-3 that would allow the command to solve operational and combat tasks.

SPM-3 "Bear" is an armored vehicle with enhanced mine protection. This vehicle was developed by order of the command of the internal troops included in the military-industrial complex "Military Engineering Center" in conjunction with the specialists of the wheeled machinery department of the Moscow State Technical University named after Bauman. The Bear provides protection against the damaging factors of explosive devices under the wheel and under the bottom with a capacity of up to 7 kilograms of TNT and ballistic protection.

SPM-3 can be used as a vehicle and operational service vehicle during counter-terrorism actions, the performance of territorial defense tasks, as well as operations to curb riots.

Dmitry Galkin earlier noted that when creating the “Medved”, two main factors were taken into account and successfully implemented - a new car can move along public roads and not scare the population with its militarized views. According to the calculations of the military-industrial complex, the Russian police will begin deliveries from the 2013. 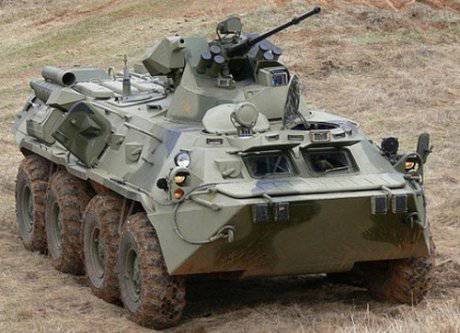 Dmitry Galkin did not rule out that in some of the districts of the Internal Troops the existing infantry fighting vehicles (BMP-2) will be replaced by new armored personnel carriers BTR-82А. The undoubted advantage of this machine over the BMP is their ability to move along public roads.

This year, the army has already received new BTR-82A. The data tower of armored vehicles, in contrast to the old BTR-80 model, is equipped with an electronic guidance system, which significantly improves the accuracy of shooting. The machine can now accurately shoot at full speed. Also, the BTR-82А is equipped with a more powerful engine having horsepower 300.

Recall the refusal of the Ministry of Defense of the new BTR-90 became known in the fall. Great hopes were placed on these machines, and enormous budget funds were spent on their development. As Dmitry Galkin explained to RIA Novosti, the main reason for this decision was the changing views on the methods of warfare. As a result, new requirements have been put forward for this class of combat vehicles.

The development of the BTR-90 was carried out by the Arzamas engineering plant, part of the "MIC". Earlier, Sergei Suvorov, a representative of the military industrial complex, reported that the main claim of the Ministry to the BTR-90 was the impossibility of going out to the stern of the landing force.

However, the MIC notes that, in spite of everything, the money spent on the BTR-90 was not in vain. When creating this car, the company tested innovations that were not previously used to create light armored vehicles. This provides the prerequisites for creating the newest machines of this class.

In the military industrial complex, a unified armored platform is being developed.

In an interview with RIA Novosti, D. Galkin said that, on the instructions of the Russian Ministry of Defense, the military industrial complex is working on developing a wheel unified armored platform for a family of vehicles. "This is not one particular car, but there will be a whole line, a family of cars, different in their purpose, on one universal base," he said.

The CEO, saying that the work is being carried out according to the schedule, refused to report at what stage they are, due to the secrecy of this information.

The development of a new medium-type combat platform (armored personnel carrier), called the Boomerang, was announced at the beginning of October by Lieutenant Colonel Sergey Vlasov, the official representative of the Ground Forces.

In the "MIC", the interest of the Ministry of Defense in cooperation with the company is noted especially. According to Dmitry Galkin to RIA Novosti, the military department has already concluded treaties with the MIC in the framework of the state defense order, 2012.

Earlier, Anatoly Serdyukov, the head of the Ministry of Defense of Russia, said that most of the contracts in the framework of the state defense order for 2012 by the military department would be concluded this year. On specific amounts and terms of contracts CEO did not apply. Other power structures of Russia, he said, have not yet decided. They are holding tenders.

It should be noted that in the current year, the Ministry of Defense with agreements in the framework of the GOZ pulled to the last. The military department fought furiously with the military-industrial complex for lowering the cost of production. Only after the intervention of the government and the prime minister was the situation finally resolved. The last major agreements on submarines of the Yasen and Borey type were signed in Severodvinsk on November 9 in the presence of V. Putin.

Speaking about this problem, Galkin noted that the issue of pricing for military products is still open. The main reason for this, he said, is that the Ministry of Defense agrees on the final cost only with the parent manufacturer.

In this case, component suppliers may increase the cost of products while maintaining the price of the final product. Of course, the leading manufacturer to deliver products to the customer at previously approved prices becomes unprofitable, Galkin explained. The way out of this situation is the approval of the cost of components of the second and third orders.
Ctrl Enter
Noticed oshЫbku Highlight text and press. Ctrl + Enter
We are
What's new in the wheeled car marketPatrol option joins Paramount family of wheeled combat vehicles
46 comments
Information
Dear reader, to leave comments on the publication, you must to register.