Manor that claimed thousands of lives

18 2016 June
10
The Russian command took a tactical attack as a general offensive.

The defensive offensive operation of the 2 Army of the Russian North-Western Front against the 9 of the German Army 18 – 24 in January 1915 was one of the most bloody battles of the First World War and, unfortunately, remains little known.

The enemy’s operational design on the Polish sector of the Russian front at Borzhimov and Volya Shidlovskoy command of the 2 of the Russian army and the North-Western front was regarded as another attempt to break through to Warsaw. Everything was done to prevent this: a powerful group of corps was created, led by the energetic general V.I. Gurko, reserves were tightened. The 6 Army Corps, reinforced by other units during the operation, became the core of the Russian defense near Volya Shidlovskaya. From the German side, the troops of the 1 and 25 of the reserve, 17 of the army corps participated in the battles. Of particular tactical importance was the area of ​​Will Shydlouskaya, which the Germans attempted to seize from January 18. Persistent enemy attacks were accompanied by heavy losses. The advanced trenches passed from hand to hand, but the situation became complicated when the Germans captured Will Shidlovskaya on 19. From now on, fierce battles with the use of heavy artillery unfolded. German sources confirm the presence of a powerful fire fist - 100 batteries, supporting the actions of German troops.

Battle of the Distillery

The commander of the North-Western Front, N.V. Ruzsky, not properly assessing the situation, finally convinced himself that the persistent German attacks against Will Shidlovskaya was the beginning of a new big offensive on Warsaw. The units of Gurko were assigned the task of returning the estate and restoring their former positions. Since the corps as part of the three divisions was not strong enough for this, the 6 divisions were transferred one after another to the commander of the 10 Army Corps, not counting brigades and smaller units.

The Germans managed to secretly install a large number of machine guns on the estate, and the estate, thanks to the surrounding ditches, in fact became a natural fort and a powerful firing point. At the same time, the stock of artillery ammunition from the Russian troops was so poor that it only made sense to withdraw only a small part of the artillery — the shells of the remaining batteries were transferred to the guns already in the firing line.

Two counterattacks did not bring success - in some places the Russian infantry chains, which used roadside ditches to cover, approached Volya Shidlovskaya at a distance of one hundred steps, but failed to capture it. It was almost impossible to hide from the fire of machine guns on the ground bound by frost.

On January 21, units of Gurko broke into the estate, but they could not seize the distillery turned into a fortress.

22 th Russians continued the offensive on the distillery. Artillery fire is a continuous satellite of Russians and especially German attacks and counterattacks in these battles.

On January 23, the manor's yard was destroyed by shells, and the distillery was badly damaged. A decisive attack on the German positions was planned for 24, but at first it was moved to the night from 25 to January 26, and then canceled altogether. The battle is over.

There is a loss, there is no result

In the course of the attack on Volya Shidlovskaya, the German military leadership, on the one hand, provoked the North-Western Front command to carry out an operation in order to restore the lost positions, on the other hand, it diverted attention from the imminent major strike in East Prussia. 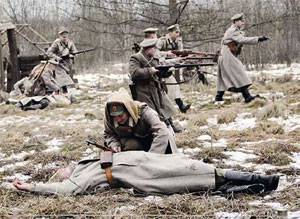 Unprepared actions, consisting in intermittent counterattacks, ended in nothing. The damage of the 6 Army Corps and assigned divisions from 18 to 23 in January amounted to 40 thousand people, the enemy - at least as many. The Germans themselves estimated their losses at 40 by thousands of people, and in only three days of fighting the enemy missed half of the group.

Considering the transience of the battle, we recognize: the operation at the Will of Shidlovskaya is one of the bloodiest in the First World War. The actual losses of the parties (assuming that 23 and 24 were mostly firing) reached 10 thousands of people per day, and without a meaningful tactical result.

Attention is drawn to the enormous density of the battle formations of the German troops. The offensive zone is 1,5 kilometers per division, that is, the latter actually occupied the battalion combat sector. Significant and the fist of the Germans - 100 batteries, of which 40 heavy on 10 kilometers of the front. Density - 60 guns per kilometer.

The Russian army could not afford such luxury. Moreover, interruptions in ammunition and materiel already began. The information about the troops transferred to Gurko is almost individually reinforced. The collapse of the operation took place on time - the Germans launched an offensive in East Prussia.

As a result, although the Russian troops failed to achieve operational success in the battle of Volya Shidlovskaya, stability in the Polish sector of the theater was preserved for the next six months. The Germans, realizing the futility of breaking into established positional defense, shifted operational activity to other sectors of the front. The battles of Volya Shidlovskaya along with other operations clearly highlighted the fact that in the context of a positional war to break through the defenses of such an enemy as the Russian imperial army, even a significant superiority in artillery and other technical means is not the decisive factor.

At the same time, in the fall and winter of 1914, Poland was the central theater of military operations of the Russian Front, both in terms of decisiveness and scale of operations, and in terms of the number of forces involved, in 1915, its stabilization and depletion of the forces of both sides led to the search for new operational solutions command of the German bloc. Russian headquarters did not see that Poland was turning into a secondary theater and an operation at Volya Shydlouskaya only a grand demonstration in order to divert forces and attention from the flank sections, where the enemy planned large-scale decisive actions in the framework of the strategic winter Cannes. True, the demonstration was paid for by the big blood of German soldiers.