15 2016 June
47
US intelligence did not find evidence of Saudi Arabia’s involvement in the 9 / 11 terrorist attacks. This was announced by John Brennan himself, who heads the Central Intelligence Agency. He specifically gave an interview to Al-Arabiya (exclusive). Undoubtedly, the statement was made with the filing of B.H. Obama, known for his reverent attitude to the allied kingdom.

Recall, the US congressmen suspected Saudi Arabia of supporting the militants who organized the September 11 2001 attacks. The US Senate recently adopted a document called “Justice Against the Sponsors of Terrorism”. The act could allow victims of attacks and relatives of the victims to sue the US courts against the government of Saudi Arabia.

Most of the commission's report on the September 11 attacks of 2001, prepared in the US by a bipartisan commission, was published as early as 2003. The voluminous text (eight hundred pages) was laid out in open access, with the exception of one chapter in the 28 pages. It was classified out of the so-called national security considerations. Some congressmen believed that the Bush administration simply did not want to spoil relations with the Saudis. The 28 pages were indeed classified by order of George W. Bush himself - supposedly, allegedly because it mentioned the likely role of Saudi Arabia, the strategic partner of the United States, in the attacks. After all, it is widely known that out of nineteen terrorists, fifteen people were subjects of Saudi Arabia.

In April, 2016 published a statement by two influential people in the American press: New York State Senator Kirsten Gillibrand and former Senator Bob Graham. Both claimed that the Saudis had "sponsored" the 9 / 11 attacks.

Mr. Graham during the Bush presidency was part of the commission of inquiry into the attacks. He told the press that the classified 28-page chapter contains information about the involvement of Riyadh in terrorist attacks. According to Graham, when future terrorists flew to the US, they did not even know English and did not have flight experience. The Saudi, the “agent” Omar al-Bayoumi, also issued money for the flight school to the militants.

The Saudi authorities completely deny any involvement in terrorist attacks in the United States. In addition, the US commission of inquiry did not reveal specific facts about the involvement of senior Saudi officials either in the organization or in the financing of the attacks.

The Obama administration in April initiated talks with congressmen opposed to the Saudis and tried to convince them of the need to reject the bill mentioned above. However, in May, the senators approved the bill. However, this does not mean that he became law.

The Saudis had previously threatened to sell off US-owned US financial assets worth about $ 750 billion, while Obama said he would veto the document.

However, this bill, as we have already written on VO, was welcomed both by a number of well-known parliamentarians and by the families of victims of the 9 / 11 attacks. These people believe that the B. H. Obama administration supports Riyadh. "It is surprising that our government supports the Saudis against their own citizens," the newspaper said. "Vedomosti" words of Mindy Kleinberg, whose husband died in the World Trade Center.

The other day, in June 2016, a powerful force joined the game about the "Saudi track" on the side of Obama - the CIA. 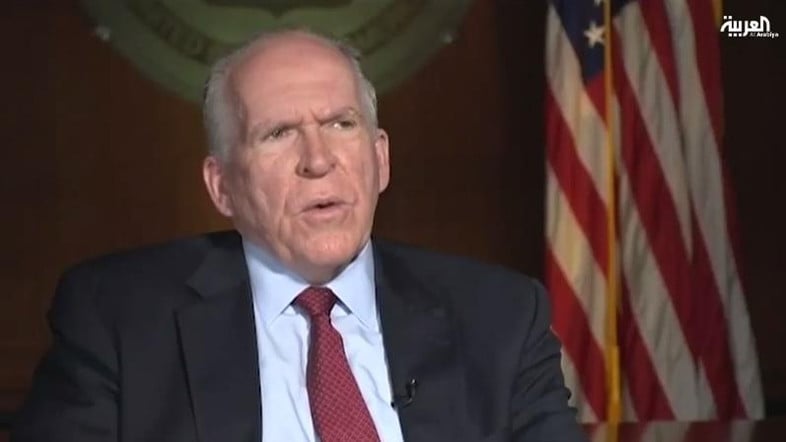 12 June on the English language website of the channel Al-Arabia There was a retelling of an exclusive interview given by CIA Director John Brennan to the Washington bureau Al Arabiya News.

According to Mr. Brennan, “no evidence” of the Saudi government’s involvement in the 9 / 11 attacks was discovered.

The director of the CIA made its statements in the context of an assessment of the 28-page report by congressmen who claimed that Saudi officials were somehow involved in the attacks.

Al Arabiya News recalls that in May 2016, Mr. John Lehman, a member of the commission for the investigation of the 11 attacks on September 2001, told CNN television that there was evidence that six Saudi authorities had supported Al -Kaidu.

However, Mr. Brennan (by the way, this man gave an interview to the Arab media for the first time) does not agree with such accusations.

The commission investigating the 11 attacks of September 2001 of the year did its job “very carefully,” the main man in the CIA said. The conclusion of the commission members about the possible involvement of the Saudi government in the terrorist attacks was as follows: there is no evidence that “the Saudi government as an institution or Saudi senior officials individually” supported the ideas of attacks in the USA on September 11 of 2001.

In addition, the director of the CIA approved the upcoming publication of 28 pages, previously classified.

According to experts who led Brennan, the attacks were organized by Al-Qaeda, led by Ayman al-Zawahiri. The head of the CIA also said that over the past fifteen years, the Saudis have taken a worthy place among the best partners of the United States "in the fight against terrorism." According to Mr. Brennan, the king of Saudi Arabia, Salman and his deputy, Crown Prince Mohammed bin Salman, are "strong partners in this fight against terrorism."

If Mr. Senators, we add, not to mention the relatives of those who died in September 2001, can relate to the “Saudi trail” with anger and pain, then Mr. President and his subordinates like Brennan will not spoil their relations with the Saudis . Moreover, they will do everything to improve them.

Barack Obama and his administration are often blamed for failures in the Middle East: they say they have blundered with Syria, relations with Saudi Arabia have worsened, and the appearance of the “IG” blinked out, and allowed the Russians to go to war, and Iran gave too many concessions. In short, sheer failures, sheer political weakness. Israelis are unhappy with Obama’s behavior, and Arabs are often visited by Putin. This suggests that "Great America" ​​is already almost on the sidelines in the Middle East. True, it is not clear who is there first, and whether it is at all.

And if Mr. Obama finally quarrels with the Saudis, with whom relations at the White House are now very strained, he will become that very president, about whom in textbooks stories They will write: in its era, the Middle East has gone out of American control. And this means nothing more than the beginning of the end of the world American “hegemony”.

That is why the main tseerushnik Mr. Brennan lost track. Now we have to wait for the Saudi response. We must, in Riyadh, count the deflection of Washington!

Observed and commented on Oleg Chuvakin
- especially for topwar.ru
Ctrl Enter
Noticed oshЫbku Highlight text and press. Ctrl + Enter
We are
Results of the week. “I have sawdust in my head. Long words only upset me. ”Geopolitical mosaic: “Arab Spring” will soon come to Saudi Arabia, and democracy in the United States tightens the screws
Military Reviewin Yandex News
Military Reviewin Google News
47 comments
Ad