FSB Major General Alexander Mikhailov: “As long as the FSB prevents terrorist acts at the design stage, it doesn’t particularly interest anyone.” 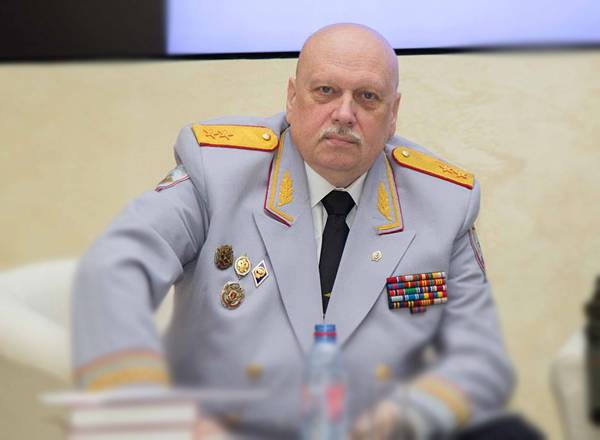 Alexander Mikhailov is a unique officer who began his work in the security forces as early as the 70s, under Andropov. He served in the KGB under Brezhnev, Gorbachev and Yeltsin, held senior positions, including in the Fifth Directorate of the KGB of the USSR (political counterintelligence); in 1989, he was appointed head of the first press service in the USSR in state security bodies. He retired in the year 2008 with the rank of Major General of the FSB, Lieutenant General of the Ministry of Internal Affairs. SECURITY.ru talks with Alexander Georgievich about the most topical issues of the work of Russian special services.

The question is to you as a person who has worked in security for many years at the highest level. In your opinion, what threat is the most real today for the security of our country?

I believe that this is the growth of some extremist sentiment in the country. Unfortunately, recently we have become accustomed to a rather comfortable existence, but we still cannot get used to the crisis. We must understand that it is impossible to get used to this, but the crisis is real, one cannot get away from it. Nevertheless, a significant proportion of people who are, so to speak, on the verge of poverty - and there are a lot of them - are an explosive mass.

In Russia, of course, a very tolerant attitude to adversity and burdens, but it is impossible to twist nuts in all directions in all directions. Let's estimate: for the last time we have not seen a single laxing decision of the authorities, everything is only aimed at tightening the belts. But they can be tightened only by those who have them, and not by those who do not converge on their stomachs - these are the representatives of top management and elites to tighten their belts and are not going to.

Therefore, people who see and condemn all this, being themselves in poverty, compared to the elite, are a very nutritious environment for all sorts of extremist emissaries who can take advantage of the plight of people. This is the main problem today that should worry us.

You served in the fifth department of the KGB of the USSR (political counterintelligence). And what, in your opinion, are there political threats inside the country today? Someone, for example, is outraged by the existence of NPOs with foreign money, and someone condemns out loud the activities of the liberal wing ...

Well, let's say this: the liberal political wing is not even a wing, but rather some kind of feather. Can the representatives of the liberals be perceived as a potential threat in terms of the impact on the electorate? Almost nothing. The electorate always needs the image of the enemy, and the point is that it is the liberals who today themselves get into it very well. They are few, but noisy, positioning themselves as unknown. But still it is small, but a bulldozer, for which the rest can follow. There is a little danger in this.

Remember the events on Bolotnaya Square - it seemed to everyone from the outside that a huge crowd of like-minded people went out there, but in fact it was one and a half cripples to all those who had drunk teeth.

But after all other people followed them, among whom there were many worthy and decent citizens. Similarly, the situation was the same during the events in 91 and 93. But unfortunately, it is not decent people who are doing this, but a bunch of bastards. And behind their backs there is another 80% of hooligans who are ready to do anything, because there are a lot of them, and because all this will be unproven.

As for the funding of NGOs by the West and all kinds of characters: it is necessary to clearly understand that there they have more pragmatists than here. And now they are clearly beginning to count their money. Why powerfully invest in some Navalny or Kasyanov? You can leave the remnants of them from your table, but no more than. Today, even the West has realized that these characters are not key figures for solving political problems in Russia.

You served in both the KGB and the FSB. And as far as I understood, one of the main tasks of the KGB was to "measure" the public mood and write analytical notes to the Kremlin every day. And how much has the work of the special services changed since then, and what are the priority tasks of the FSB today?

Yes, I think, and now the same thing. Of course, official sociological services are an obvious tool for measuring public sentiment. But, as they say in intelligence, you can not rely on one source. Therefore, the security services make their own "measurements", without this it is impossible. Another thing is that no sociological organization can take “measurements” among the protest masses, while special agencies can and do.

And here the question arises: if such a sentiment analysis is done, then why do we not see the reaction of the authorities? Consider Moscow: what upsets residents in the first place? Call it - neglect of the cultural layer of Moscow. Infinite construction, point buildings, piling up of glass structures in the center, constant spending on any replacement curbs that are still quite suitable, paid parking, tow trucks ... By the way, the actions of the latter can be classified as theft of personal property committed by a group of persons by prior agreement . The man goes out and does not understand - whether his car was stolen or evacuated. These are all pockets of social tension.

But the most important thing is not even that. The most important thing today for any person, and the most dangerous for society, is a sense of injustice and the impossibility of achieving the truth. When people turn to law enforcement, law enforcement agencies do not solve the problem of the applicants, but the problem of those whom they complain about. And look what is happening even at the level of the president - he says in his message what to do, and his surroundings and performers react very sluggishly. Well, if they do not perform, then it is necessary to change the command?

The FSB has repeatedly declared that their specialists have a vital connection with society. But for several years under the FSB, the Advisory Board existed first - from 1997 to 2004 a year, and then the Public Council, created in 2007. In your opinion, was this format useful? What are his successes?

I think that there is little sense in such things. To advise someone, you must at least know the subject for which you are consulting. And if we talk about the FSB, then this is the most closed system, and there are very few specialists on it. They don’t attract old personnel, and new people who know about the FSB only from detectives don’t understand anything at all. There is the Security Council of the Russian Federation, under which a variety of issues are raised and discussed - from economic problems to the health care system. This is quite enough.

Alexander Georgievich, how does political tension reflect in the interaction of our and foreign special services? It is known that Russia unilaterally withdrew from the agreement on cooperation with the US special services.

And rightly, that came out. I’m working with them, if they even detain our citizens, even without notifying the Russian side, where it is not clear for what reasons? What then should this interaction be? In general, I do not really believe in the cooperation of the special services. As one of the founders of the CIA, intelligence officer Allen Dulles, said there are intelligence services from friendly countries, but there are no friendly intelligence services.

Each country, even interacting with its partners, still lobbies its national interests. Of course, there are common points for cooperation, but we see that the Americans themselves do not really want to go for it. Remember how many times they were asked to coordinate in Syria with our HQs?

Well, yes, you can remember and unilaterally they frozen format "Russia - NATO" ...

Yes, in general, NATO is the organ of the Cold War, which nowadays no one needs by and large.

Well, how? They are marching in Lithuania right now as part of a huge military column, they have begun some of the largest military exercises in recent years in Poland ...

Here we must remember such a term as "target designation". During any "special period" all the points dangerous for us on the geographic map are within the range of our missiles. That is, there was some kind of village there that did not pose any threat or interest to Russia, but as soon as the American base appeared there, this village was under the likely blow of our forces in a critical situation. Question: does conditional Lithuania need this?

You know that, such a kind of handicap - they invented a new bulletproof vest, which means you need to create a bullet that pierces it.

Here you need to get out of this handicap, because basically everything is created artificially to advance the defense budget, for example. And so, who needs this Lithuania? They do not want to become adults, well, let them play, just let them remember that if something happens, they will be hit on them, not because it is Lithuania, but because there is an American base there.

And the last question is rather about ideology and meanings: it has been the custom in our country since Soviet times that people treated the KGB as a punitive body. How has the image of the special services changed in the minds of citizens today? And do you think they now trust the FSB as defenders?

You know, any structure has some functionality. Here is the traffic light, while it lights up, no one pays any attention to it, but as soon as it stops working, as soon as there is congestion and discontent among people. Currently, interest in the FSB is lost. Why? And because we had a wave of hysteria about punitive organs. Secondly, it has become obvious to everyone in recent years that the security service fulfills its direct duties.

While the FSB prevents acts of terrorism at the design stage, it does not particularly interest anyone.

If suddenly something happens, then we get to the full. In my opinion, today the security services are in a very comfortable environment, because they don’t have to be distracted from their duties to some unnecessary emotions. And this is an indicator of the degree of public confidence in the bodies of protection. On the other hand, if the counterintelligence regime is properly built in the country, then no terrorists will come here because they understand that they will be revealed immediately; and, so to speak, homegrown gangsters realize that their crimes will be prevented at the design stage.

Therefore, I see a lot of positive things in the work of the special services, which really provide peace in our country in the literal sense of the word.