10 2016 June
36
Blog chervonec-001 published the next report of the Magician about the situation in the Donetsk Republic. 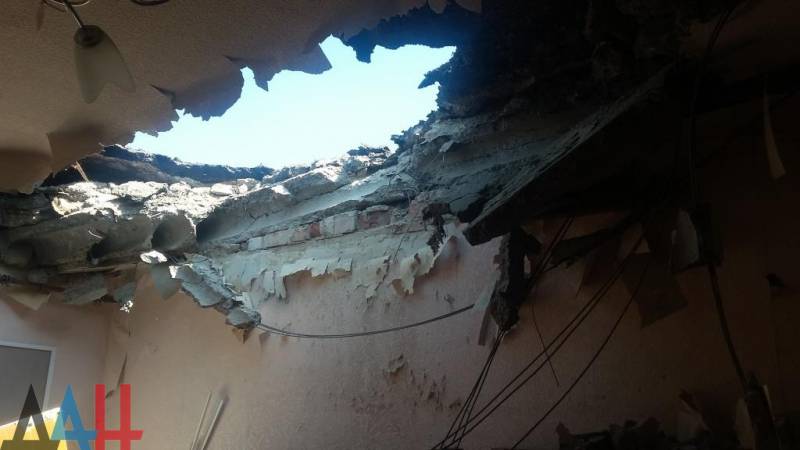 “3 June Friday, 00: 00. Petrovsky district of Donetsk under fire artillery APU. In 01: 55, shelling continues, shooting started in Staromikhailovka, the BMP-2, AGSy and ZU are working from the APU. An hour later, in the north and west of Donetsk, the APU stopped shelling. I don’t know if we shut up ours, just as we’ve shut up the day before in the north. Until the evening we managed to enjoy the silence. In 20: The 00 south front is noisy. From the Sartana region, dill conducts shelling of our positions west of Kominternovo. As usual, small arms and after half an hour mortars, then after an hour the art began to shoot.

In 20: 40 Zaitsevo began shelling, APU used machine guns and mortars. Small groups of the Armed Forces of Ukraine numbering 5-8 soldiers, tried to advance and regain previously lost positions. In 21: The 20 APU began shelling 120-mm mines and from the AGS position near the YPG. Several UAVs drive over Donetsk memory at once. Until the 23 clock was quiet, residents began to leave the basements and get ready for bed. In 23: 10 120-mm mines began to fall near the airport, two mortars were working from the direction of the village of Skilled. Also, mines began to fall in the Kirov region.

From 23: 30 at the airport is a frequent cannonade, mortar and art duel. For Friday there was no information loss, only Basurin said that south of Dokuchaevsk near the village of Nikolaevka in the 72 brigade and the Aydar battalion 15 injured, the official version is a conflict between the Armed Forces of Ukraine and the militants.

4 June Saturday, 00: 00 from the direction of Marinka ukry began to fire at 120-mm mines Petrovsky district. A UAV is circling low in the sky, the militia working on it from several points at once. It all dragged on until 4 in the morning.

Until the evening it was relatively quiet. Again it was raining all day, the rifle was working at the airport at the sound of rain. With 20: 00 hours, the airport-Spartak, YAPG defense line has rattled. Mortars and small. In 20: 40 APU connected shelling Zaitsevo.

On this day, our snipers shot another OUN (organization of Ukrainian nationalists). 21: 10 in Spartak village is a fire, a column of smoke is visible even from the center of Donetsk.

In the area of ​​the YAP, a strong fight, again an attempt by the APU motorized infantry to advance in promke and fight off at least a meter. Two Ukrainian BMP took turns leaving because of the buildings and worked on our positions. The defenders of the republic, who beat off the attack, called for the support of mortars. One of the BMP mines was covered and she immediately began to smoke, the second one also stopped moving, most likely, something damaged by splinters.

22: 30 from two directions 120-mm mine APU is firing Dokuchaevsk. At the same time, in Donetsk, the militia memory unit is driven by several UAVs. Dokuchaevsk under fire for an entire hour. In 23: 30, our art immediately responded to the spirit of the districts. An hour later, ukry on the whole front calmed down.

5 June Sunday, 02: 00. UAV militia spotted on the positions of the Armed Forces of Ukraine in the Ocheretino area preparing arties for shelling. In 02: 10, the first volley flew over them, five minutes later, then every five minutes, 02: 55 had two volleys in a row. The APU decided not to fire, the capital of the republic fell into a dream ...

6 June Monday, around 11: The 35 APU began bombarding the western districts of Donetsk. In 17: 30 under shelling Airport and YAPG.

In 18: 10 in the Petrovsky district, and in 18: 20 in the Kuibyshev district there were arrivals of several heavy shells.

Until 23:30 the entire front was rumbled, the shelling was stronger than on the weekend. In the south, west and north of Donetsk and further along the front to the LPR. From the area of ​​Mayorsk and Svetlodarsk, the Armed Forces of Ukraine undertook reconnaissance in battle before a platoon of infantry with the support of a couple tanks. The purpose of this stupid undertaking is not clear. Identify BCH firing points and crush them? Well, so the price was expensive for the APU - again dozens of dead and wounded. The next morning, lamentations that there are no medicines in the hospitals of Kharkov and the Dnieper and requests to the population to bring things ...

7 June Tuesday, also the schedule, the same cities and towns to 20: 30 quietly, then went away, or rather flew. Above Makeevka our air defense "Wasp" shot down a UAV, the whole city heard cotton in the sky. The whole evening it was raining heavily, but this did not stop the Ukravs from launching the UAV and conducting shelling. After the appearance of the UAV strong shelling with 23: 00.

8 June Wednesday, 00: 00 heavy shelling continues, which continued without interruption 30 minutes. In some areas of Donetsk lost electricity and water supply.

Around 00: 30, the militia responded to the APU battery firing from the Ocheretino area.

With 18: 20 on the same schedule - shelling, shelling and shelling again. While there is no rain and good visibility, ukry rolled out tanks on the whole front and use them as self-propelled guns. All evening strong shelling.

From 22: 30, two Acacia self-propelled guns were connected to the shelling of YAP. Then they worked in Donetsk. First, they shot at the Kievsky district, they hit a five-story residential building, and two buses were also damaged in the courtyard.

In 23: 00 ukry began to beat on the quarters of the Kuibyshev district. I fell to the ground and lay as I understood that I would not reach the shelter. One of the shells flew over and fell very close. In the morning I saw that “near” is almost 150 meters.

Ten 152-mm shells flew with a whistle above me, four fell on Nitrogen, hit houses, a private house and a three-story apartment, the other six fell south and did not get anywhere.

9 June Thursday, 00: 20 after a short break again shelling. 00: The 30 of the Ukrainian Armed Forces purposefully fire on Dokuchaevsk substations. 00: 40 in the area Verkhnetoretsky - Red Partizan fires, there are battles in the evening. There is also a 1-OMBG "Somalia".

Silence again until the evening, after the 20 hours of the militia memory unit work on the UAV, the bachs at the airport and the YPG.

Ctrl Enter
Noticed oshЫbku Highlight text and press. Ctrl + Enter
We are
Weekly summary (30 January-5 February) on the military and social situation in the DPR from the military officer "Mag"Voenkor "Magician" about the situation in the DPR
Military Reviewin Yandex News
Military Reviewin Google News
36 comments
Information
Dear reader, to leave comments on the publication, you must sign in.