14 2016 June
48
According to experts of the Bank of Russia, the economic situation of China greatly influences the situation in the Russian Federation. The state of China, they say, is a key factor affecting the Russian economy. Even the policy of the US Federal Reserve is less significant for Russia. The fact is that a slowdown in the growth of the PRC economy leads to a decrease in demand for raw materials, which affects the dynamics of world prices for oil and metals.


Recently, speaking at the Credit Suisse “Emerging Markets - Russia” conference, First Deputy Governor of the Bank of Russia Ksenia Yudaeva explained that slowing down the Chinese economy by an 1 percentage point results in slowing down the Russian economy by 0,5 points. “As for our estimates, the slowdown of the Chinese economy by 1 pp broadcast on 0,5 pp slowdown of the Russian economy, provided that Russia does not change the economic course ", - quotes her TASS.

Earlier, we recall, the economist at the International Monetary Fund, Anna Ilyina, who occupies the post of head of the emerging economies department of the European Department of the IMF, suggested that the decline in the Russian economy in 2016 and 2017. should slow down. "Last year was very difficult, because the Russian economy decreased by 3,7%, oil prices fell, and this undermined foreign trade," she quotes. Rosbalt. - Without a doubt, a decrease in demand in Russia affected the countries that export to this country. And yet we believe that the recession in Russia this year will be less, and next year we will get positive growth, and this will be good the news for her trading partners. ”

The Bank of Russia, however, does not give such rosy assessments of the near future and, it seems, does not expect a “positive growth”. And all the reason - again, China.

Speaking at the same Credit Suisse conference, Deputy Finance Minister Maxim Oreshkin noted that problems in the Chinese economy could return oil prices to the level of the beginning of the year. True, Russia less than other countries will suffer from the deterioration of the economy of the Middle Kingdom. 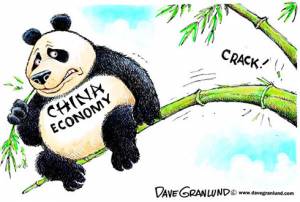 According to the deputy head of the Ministry of Finance of the Russian Federation, which leads RBC, China's economic slowdown can return oil prices to the level of the beginning of the 2016 of the year. In January, the price ranged between $ 30 and $ 40, and in the middle of the month it fell below $ 28, the agency reminds.

“Serious problems in the Chinese economy can lead to a repetition of the collapse in oil prices, which we have already seen at the beginning of the year. These risks are worth paying attention to when formulating economic policies; they cannot be dismissed. All policies need to be structured taking into account the risk of recession in China, ”said Oreshkin.

However, in his opinion, Russia will suffer less than other countries from the deterioration of the situation in the Chinese economy: “In fact, Russia will be the country that will suffer the least from Chinese problems. We will see, because for the last couple of years we have undergone serious adjustments, which, I think, will help us if there is another wave of global economic problems. ”

In the summer of 2015, recall "Vedomosti"when world markets covered the first wave of panic because of a likely slowdown in the PRC economy, economists at Citigroup calculated how the expected significant slowdown could affect the growth rates of other countries.

According to analysts, Asian countries, neighbors of China, should feel the acute negative impact. Neither their position will affect the decline in demand for their products. In addition, the Chinese factor will hit the exporters of raw materials: in Chile, Malaysia, Russia, Australia and Norway.

In Russia, a specific forecast was voiced due to a slowdown in China's GDP growth on 1 pp. According to Citigroup, the Russian Federation could lose 0,7 pp growth in this case.

As the chairman of Roubini Global Economics and professor of Stern Business School Nouriel Roubini said at the conference, the Chinese economy cannot grow at a rate faster than 5% per year, although management has set the task to grow by 6,5% (difficult to implement and with many risks). According to the expert, in the short term, the weakening of monetary policy helps to stimulate growth, but in the medium term it holds many risks and increases the stress for the economy.

However, not all analysts believe that there is a direct and strong connection between the economies of China and Russia.

The head of the international economic organizations sector of the Russian Institute for Strategic Studies Vyacheslav Kholodkov recently spoke out regarding Yidaeva’s opinion above. He believes that the search for external causes to explain internal problems is an attempt to shift responsibility from a sick head to a healthy one.

"This is an attempt to shift the responsibility on someone, in this case to China, for their own mediocre economic policy," - quotes the expert "Reedus".

Yes, the Celestial Empire is one of the largest trading partners of Russia. In 2015, the volume of foreign trade of the Russian Federation amounted to 534 billion dollars, of which China accounted for 68 billion dollars, or 12,7% of the total turnover. At the same time, Russia is much more dependent on the EU. “The EU countries account for 45% of our foreign trade. And it is the EU countries, not China, that are the main consumers of our oil and gas, ”said Kholodkov.

The expert believes that the statements about the slowdown in China's economy as the main reason for the decline in world oil prices is a primitive point of view. Indeed, in 2015, global GDP grew by 3,1%, what kind of decline is there? And the demand for oil, the expert says, also grew: its consumption increased from 93 million barrels to 95 million barrels per day. Kholodkov notes that the price of oil fell not because of lower demand, but because of the increase in its production by producing countries: supply by two million barrels per day exceeded demand. The expert recalled that the Saudis increased shipments to 1,5 million barrels per day, then Iraq is increasing them, and Iran has also entered the world market. Finally, we must not forget about the "shale revolution" in the United States.

“Here are the main factors behind the fall in oil prices. Of course, the slowdown in the growth of the Chinese economy had some impact on the conjuncture of the world oil market. But this influence is much less than the factors that I have listed, ”said Kholodkov.

As for the ruble, the Bank of Russia itself in October 2014 of the year released the ruble to float freely! And he even refused to regulate the currency in the regimes of the so-called floating exchange rate (through currency interventions). Against this background, the reasoning about the slowdown in China is ridiculous, the expert concluded. According to him, the current Chinese growth rate (6,7% per year) of Russia “with this kind of economic management” is “only a dream”.

Russia, we will add on our own, much of what we have to dream with a guide that gives advices to old men: “You stay here ...” The leadership listens these are the popular speeches: “They wipe their feet on us!” Having thought it over, the authorities find appropriate to justify recall the notorious inflation, which they themselves, with the active assistance of the Central Bank, dispersed in pursuit of the ruble compensation of dollar oil revenues.

By the way, “protecting and ensuring the stability of the ruble” is the primary task of the Central Bank, stated in art. 3 of Federal Law No. XXUMX-FZ “On the Central Bank of the Russian Federation (Bank of Russia)”. Now, the Central Bank is pointing at the Chinese, saying that they are to blame, because of them we have a “slowdown” of the economy, and soon we will generally come to “a repeat of the collapse in oil prices.”