10 2016 June
29
Everything is like in that Jewish joke about a parrot, which at the customs to its owner said that it was necessary to throw a stuffed bird, but Senya, from here.

We have the opposite situation is obtained. Poor old Europe, with all her might, is already pushing away from the Europeans from Ukraine, for the “new European” have come to the fore, and without them. But the stubbornness (a worthy character trait, if that), with which Ukraine is trying to get into Europe, sometimes even causes admiration. 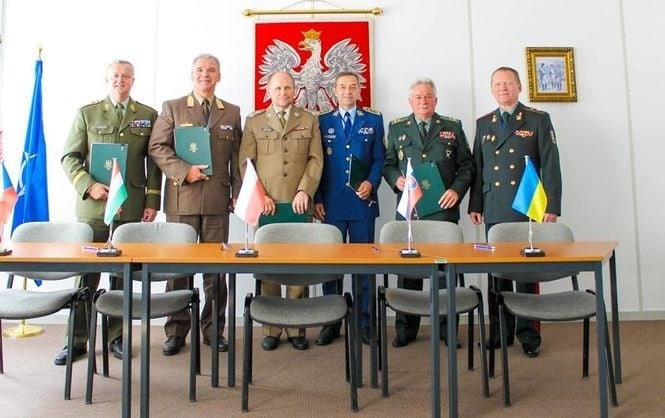 A scarecrow or a carcass is already an aspect. The main thing - in Europe.

If they do not take it directly, it means that it is necessary to “leak out”. As shpyuguny, I'm sorry, scouts. Hiding in the folds of the area, in small groups.

Why? It turned out the same.

A landmark document was signed in Brussels. Whole Note. The note on the accession of the Ministry of Defense of Ukraine to the Technical Agreement between Poland, Slovakia, Hungary and the Czech Republic regarding cooperation in the framework of the Combat Tactical Group of the European Union formed by the Visegrad Four countries.

The Visegrad Four is just all of the above. And, by the way, this is not the first association under such a sign.

The first appeared in the middle ages. In November, 1335, in its royal palace in Visegrad, the Hungarian king, Robert Kára, held council with the Polish king, Casimir III, and the Czech king, János Luxembourg. The purpose of the meeting of the rulers of the three countries was the signing of economic agreements aimed at combating Austrian trade rivals.

The collaboration was so fruitful that the economies of the three kingdoms flourished. Renewal of cooperation began on February 15. 1991. Then a joint declaration was signed by the Prime Ministers and the Presidents of the three countries, Václav Havel, Lech Walesa and Jozsef Antall.

After the "velvet divorce" of Czechoslovakia, which was divided into two independent states (the Czech Republic and Slovakia), the troika turned into a four.

And quite naturally, following the pattern and likeness of other entities (such as the same CSTO), the group has a semblance of armed forces. Common And now these forces were allowed to join Ukraine. Yes, I had to make an exception, since Ukraine is not a member of NATO and is not a member of the EU. But somehow plowed.

And the Ukrainian armed forces are allowed to take part in the very European military education.

But then it’s not just laughter that begins. Next will just rzhaka.

For a start it is worth seeing, but what is this unification itself, and even the military, into which the APU got involved.

The Visegrad Battle Tactical Group (BTG) is a reinforced battalion with military equipment, which includes about 2,5 thousands of troops. It is completed, accordingly, by the military personnel of the participating countries.

This is actually a multinational rapid reaction force capable of quickly resolving sudden local conflicts. But it’s not easy to say how “fast response” they are.

The fact is that during duty the military personnel are in places of permanent deployment in their countries, but if they decide to start the operation, the group should gather within 5-10 days and be ready to perform the assigned combat tasks within 30-120 days.

It is very difficult to understand what kind of local conflict that requires quick intervention and resolution will wait three months until this BTG is ready. As practice shows, war usually waits for no one. And the local conflict is even more so.

In general, it is clear that this BTG, made up of representatives of four (sorry, now five) states, cannot fight anyone. Do not have time to war. So in general, any European BTG is a fiction that simply cannot have a serious impact on the situation.

So why does Ukraine need this fuss? I will refer to the press release of the Ministry of Defense of Ukraine.

"Full participation in the Combat Tactical Group will allow the Ukrainian army to develop operational capabilities and improve military standards. They will also maintain compatibility with the armies of EU member states in terms of crisis management."

Already more interesting. Especially in terms of crisis management. And where are the crises that affect the interests of the Visegrad Four? Poland? Not. Czech? Also no. Slovakia? Silence. Hungary? Yes, too, everything is calm.

The crisis exists only in Ukraine. And the crisis is not external, but internal, but everything is up to date. Although one should not think that all this was conceived by the Ukrainian authorities solely in order to attract NATO troops for operations against the Donbas.

The application for joining the European BTG Ukraine filed back in 2010 year. And in April, 2012, this task was included by the government in the plan of priority activities for European integration. Well, congratulations. It worked.

It is difficult to judge how right the Ukrainian leaders are, considering the integration of their armed forces into European formations “by the way to Europe”. Here we should not forget that everything that is in service with the Armed Forces of Ukraine has been produced according to Soviet standards. And here, before full integration is still very far away.

But Kiev is working in this direction, and it seems to be working fruitfully. By the way, this is not the first case of the participation of Ukrainian troops in the European BTG. Ukraine participated in the activities of the Baltic BTG. This group includes Poland, Germany, Slovakia, Lithuania and Latvia. Ukraine was allowed even before the operational duty!

But it turned out as usual. That is a shame. All that Ukraine was able to offer as a participant’s contribution is the An-26 Aeromedical evacuation aircraft “Vita”. With the crew. But later the plane went down, and Ukraine was not called on duty anymore.

Today's day is unlikely to bring something new. What kind of full-fledged integration can we talk about when all the money that Ukraine can allocate for military spending goes not to develop or at least purchase new types of weapons, but to patch and roll up existing ones?

But the agreement was signed, the APU - in Europe. Few, it is possible that the number of soldiers involved will be equivalent to the number donated by the Americans M-16 rifles, however.

The real benefit of this alliance is more than doubtful. For the Visegrad Four countries are not the United States, and not even Germany or Turkey. It is unlikely that they will be able to provide serious assistance in the re-equipment and re-equipment of the Ukrainian army.

So there is another peremoga and “we are in Europe” in words, but in reality, as they say in Odessa, “good performance is worth more than money”. There is no money in Ukraine. Remains only show off.