7 2016 June
22
Blog chervonec-001 published on Monday a summary of the voter “Mag”, which tells about a sharp exacerbation of the situation in the DPR from 26 to June 2. 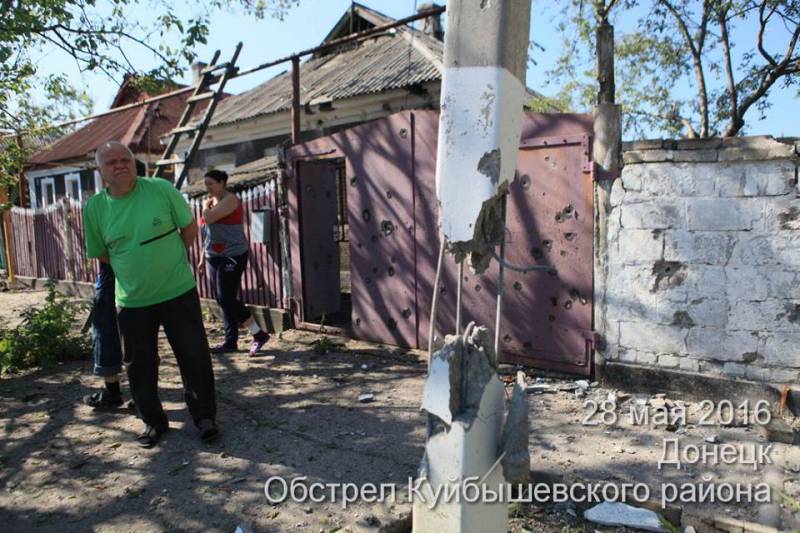 “Exacerbation awaited 22 May. The information was from many sources, from both sides, both our and Ukrainian. But it all started four days later, May 26 on Thursday at 12: Moscow time, 00.

APU began shelling at once on several sections of the front, but the main flew in the private sector near Avdeevka, occupied by the militia. Half an hour later the infantry of the 58th brigade went, in groups of 15-20 people each. In total, up to two infantry companies participated, with the support of the company tanks and a few batteries of mortars and artillery. Despite the thunderstorm and heavy rain, the attack failed, the militia detected the advance of the infantry and pressed it with machine-gun and mortar fire.

It all dragged on to 16: 30. Then there was a break to 17: 50. Then the shelling began and stretched to 22: 00. I didn’t know what attack came this time late in the evening. The front under Avdiivka boomed until 2 at night, the result for the APU was the same.

27 May, Friday.
After yesterday's attempts to break through and heavy shelling, until the evening it was quiet. Which by the way surprised everyone. Here and in the usual days “truce - usually noisy, how many of these Fridays we survived in two years, and this time we expected the resumption of fighting.

In 20: 30 simultaneously shelling began in all hot spots on the front of the DPR. The south of Kominternovo and Sartan rustled in the south, at the same time, Dokuchaevsk, and with it the whole west of Donetsk revived - Aleksandrovka, Petrovka, Staromikhaylovka. Connected north - Volvo, Zhabunki, Oktyabrsky, Airport, Spartak and further north - YaPG, Broad and Iron beams, Gorlovka and Zaytsevo, Golmovsky and further Lozovoe and Logvinovo. On all fronts, rifle, RPG, LNG, AGS, 82-mm and 120-mm mortars worked.
Minutes through 30, as we all have become accustomed to, the art of the Armed Forces of Ukraine began to work, mainly in the directions - Dokuchaevsk and Staromikhailovka. As it turned out, it was an imitation of action. Arta APU quite dispersed. Ukry floated everything they had on hand, except for the MLRS. Attempts breakthroughs, as on Thursday was not followed.

28 May, Saturday.
Around 00: 15 apparently our gunners received permission to respond. There were a lot of minuses (when it flies away from us). Worked on 30 minutes, with short breaks. Immediately revived all social networks on both sides. A glow began in the area of ​​Sands, which burned is not clear. Officials did not give any comments the next day. However, the art of the APU did not shut up and continued shelling.

1-i and 2-i site of the northern suburb of Donetsk suffered a lot. The next day, the media reported from the affected areas after the shelling of the Ukrainian junta. Ukrainian art bombarded Donetsk to 2 hours of the night. Around the night of 2, a powerful militia retaliation followed again and worked almost without interruption until 4 in the morning. Mortars on both sides rumbled until 6 morning. In general, gunfights and mine attacks at the airport have lasted for a day.

Until Saturday evening it was quiet, in 20: 10 Donetsk again heard bachs. The airport and the YPG came under fire from mortars. They called with Kominternovo and said that their APU was also noisy from the rifle and AGS. In Gorlovka, quietly, only distant bachi came from Lozovoy and Svetlodarsk. Again break in the shelling. From 22: 20 on the line of defense Lozovoe-Logvinovo battle. In Donetsk, however, the militia worked on several UAVs at once. One flew off and was shot down over Kalininsky district, in the center of the city fell into the Kalmius river.

Apparently, the command of the Armed Forces of Ukraine wanted to find out what was so "washed" them, so they hung the UAV over Donetsk - over the Kuibyshev, Kalinin, Petrovsky districts. Over Gorlovka, Yasinovataya and YaPG. Air defense militia tried to knock them mainly from the memory.

In 22: 35 began heavy shelling of the positions of the DPR near Avdiivka and Yasinovataya. Mortars and art of the Ukrainian Armed Forces covered by squares.

29 May, Sunday.
The shelling continued. Heavy long-range art worked on the WCT and surroundings. A thunderstorm began and rain again, however, the shelling did not end. The gunners continued to level the Volvo front line, Airport, Spartak, YPG.

01: 20, the northern suburbs of Donetsk under heavy shelling, is flying in such quantities as in January, 2015, when the airport was released. The number of mines and shells fell in huge quantities. All this horror ended in 02: 30 nights. In the morning and in the afternoon it was quiet.

With 15 hours in the area of ​​Avdiivka and YPG there were heavy battles and shelling. As it turned out, the APU again tried to break through to the highway. In an attempt to break through our positions in the Avdiivka area, the 16 Battalion of the 58 Brigade of the Armed Forces of Ukraine suffered losses - 14 killed and 25 wounded. Also involved in the breakthrough "Right Sector" and various mercenaries, their losses are not known. Rather, 13 died, but when the corpses were taken out by ZIL, the car exploded on its own mine, the driver of the APU died.

In the 16 battalion, riots broke out because of senseless losses, the SBU arrived and three soldiers were arrested. The command of the APU of the rest in the 16 battalion awarded the medal "Avdiivka. Strong spirit". 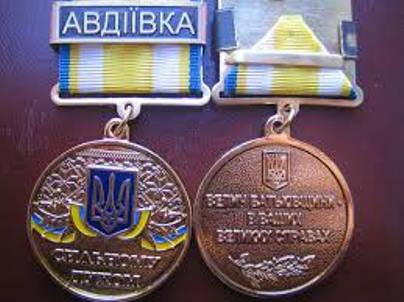 With 22: 45, the whole front revived again, from the Sea of ​​Azov, to Dokuchaevsk, west and north of Donetsk and to the Debaltseve district. Yap under artillery fire, as usual. Our began to answer, mainly for the battery that fired at YPG.

30 MAY, MONDAY.
00: 00, heavy shelling of the northern suburbs, light flashing in several areas. With 01: 35 is a powerful rumble, this is a heavy artillery of the Armed Forces of Ukraine fired on the militia positions in the area of ​​the HPA. Front thundered to 02: Monday night's 30. And again until the evening it was quiet, with 17: 30 again rustled the airport and the YPG.

After an hour and a half, the rest of the suburbs and villages of the DPR were connected, the list is the same. Arta VSU began working on us immediately, and not as usual - small, AGS, mortars, and only then art after an hour. Again there were attempts at breakthroughs and our forced responses. That night, 58 soldiers were killed in the 13 Brigade in the 5 Battalion, more than 16 soldiers were killed and wounded in the 10 Battalion.
Passed information from our intelligence that the command of the 58 brigade received the go-ahead from Kiev on the preparation and use of the Grad and Uragan MLRS. During the last two months, the APU accumulated them in the settlements to the west and north of Donetsk. Also from the 74 brigade arrived reconnaissance and engineering company.

In the village of Zaitsevo, ours advanced approximately 450-500 meters deep into the front. Practically freeing the village Zaitsevo completely. In the same place, the APU lost a sniper from the 53 brigade.
Quotation of the Ukrainian military leader Roman Bochkaly: "There was a loss in the 53 Brigade. A sniper died. His name was Basil. From the Zhytomyr region. Three children were left without a father, the fourth was soon to be born. task: caught on a thermal imaging sight. The enemy had it, our fighters do not have such a sight for the whole platoon. We are stingy with our lives. "

By the way, at first they didn’t recognize ukry, the loss of part of Zaitsevo, then they said that they were in neutral, which means they didn’t lose anything, then the regrouping was told, and in general “you're lying.”

31 May Tuesday.
00: A very frequent cannonade is heard from the airport. Every second, one or two 40-mm mines fall. In the west of Donetsk, too, shelling, the horizon is all sparkling. Around 120: our 01 began to respond, the APU calmed down.

Until late in the evening, it was quiet in 21: 15 again, the memory over Donetsk is driven by UAVs of western partners. In 22: 15 already five flying UAVs, several long tracks light up the night sky. A UAV was shot down over Gorlovka, it fell to the southwest in the area of ​​the Knitting Factory and the headquarters.

1 June, Wednesday.
00: 20 battles do not subside, Trudovskie (Petrovsky district of Donetsk), Staromikhaylovka, Airport, Spartak, YPG mortars. At two o'clock in the morning, the APU calmed down, again until late in the evening. With 20: 30 began fighting and shelling. In the area of ​​Avdiivka, the sappers of the Armed Forces of Ukraine began demining the corridors for their assault DRGs.


2 June, Thursday.
00: 15 west of Dokuchaevsk fight. Ours give an answer on the whole front. Ukry calmed down until the evening. In the evening, in 19: 00, the whole front came alive, small and mortars. UAVs appeared. In 22: 00 ZU drive UAV again. There are small ones, they fly at a height of several hundred meters, these are knocked out of a rifle one. And there are more professional, they are larger and work higher to 1500 meters. According to them, the memory is already running. There are large UAVs that climb up to 2500 meters, Israeli, American, maybe even whose. Here our Osa air defense missiles are working on them.

In general, May 26 to June 2 fighting and art shelling were very heavy. I wrote above that their intensity reminded the events of January-February of 2015, when the airport and Debaltseve were released. I also note the massive use of UAVs, frequent attempts to send us DRG under the noise of shelling, as well as suicide attacks of the 58 brigade in the area of ​​the YPG. Residents of Donetsk are very positive about the fact that ours finally started giving an answer.