Strelkov (Girkin) gave an interview to The Guardian, in which he announced that he was disappointed in Russian President Vladimir Putin.

6 2016 June
282
Brittanya The Guardian publishes an interview with Igor Strelkov (Girkin), whom in the version with quotation marks he calls the Russian “valiant hero” or “military hero of Russia”. Interview Strelkova (Girkin) is actually completely devoted to how he "disillusioned with Putin."

The British edition presents to his readers Strelkov as "a former Russian security officer with a trimmed gray mustache and a penchant for reconstructions of military episodes stories"It is added that Strelkov (Girkin) with his squadron held Slavyansk in the 2014 year, and as a characteristic of Strelkov, literally the following is reported:" a radical nationalist. "

The article says that today, Strelkov, being in his Moscow office, “strokes a cat and criticizes Russian President Putin.” 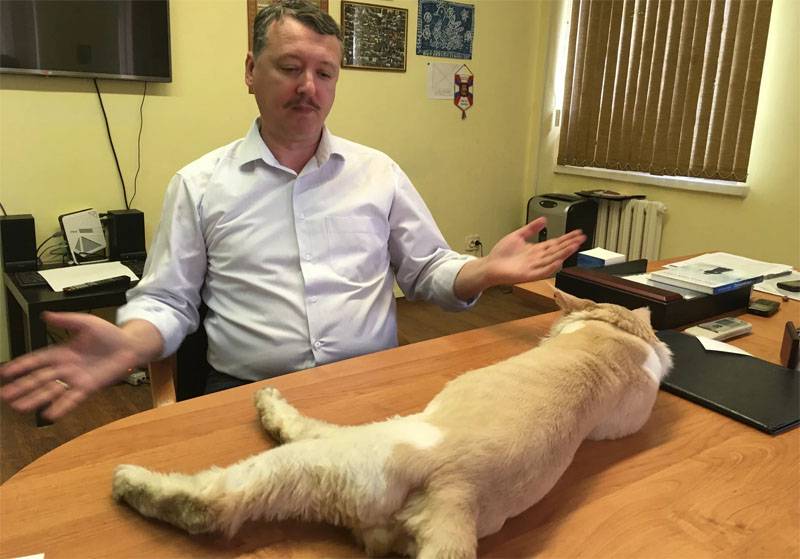 From the statement Strelkov (Girkin), made in an interview The Guardian:
Putin and his entourage have recently taken steps that, I believe, will almost inevitably lead to the collapse of the system. We do not yet know how, and we do not know when, but we are sure that this will be a collapse. I think it will happen sooner rather than later.

According to Strelkov, Russia must occupy all those lands on which ethnic Russians live. At the same time, as he writes The Guardian, Strelkov (Girkin) calls Ukrainians Russians who speak a different dialect.

Strelkov complains that Putin stopped after solving the issue with the Crimea.

Shooters:
He crossed the Rubicon, but then suddenly and illogically stopped. He did not retreat, but did not go forward. It seems that he has no ideas, and seems to be frozen in anticipation of a miracle. In fact, it is stuck in the middle of the swamp.

Further, in an interview Strelkov talks about his command of the detachment in Slavyansk. According to him, all sentences in respect of the detained representatives of the enemy were issued on the basis of court hearings, in which there were prosecutors and lawyers. Strelkov said that each of his fighters knew that the commission of any crime would end in a lawsuit.

Shooters:
Every soldier knew that if he committed a crime, he would be punished as severely as the enemy, if not more severely. It helped a lot with discipline.

When Strelkov was asked whether the regular Russian army was in the Donbass, he stated that he was independent, and that during the operation in Slavyansk, he wanted Russian troops to enter Ukraine. Then the interviewee added that he did not want to comment on the absence or presence of the Russian army in the Donbas, leaving the right to think to the journalists themselves The Guardian.

At the end of the interview, Strelkov said that he was an inconvenient figure for the Russian authorities, but he immediately added that he and his associates are not going to take the revolutionary path to overthrow the authorities in Russia.

This interview to the British press shows that Strelkov (Girkin) decided to aim a blow at not only Russian, but also international publicity. And for the Western press, the real Nightingale Trill is to listen to how anyone, regardless of rank, status, or political views, criticizes the authorities of Russia and Vladimir Putin personally.