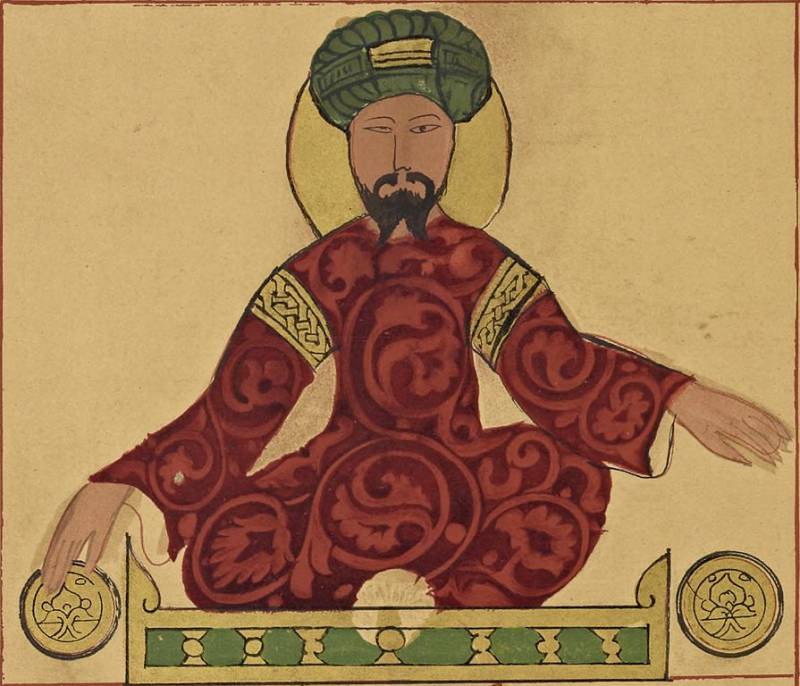 A unique lifetime portrait of Saladin, written around 1185, hr. and preserved in the work of Ismail Al-Jazari. (Image source: https://upload. 28.jpg).

However, the desire to blacken Prince Reno goes back to his medieval opponents and on closer examination turns out to be a set of propaganda clichés taken from Muslim chronicles. At the same time, his European Christian contemporaries did not find anything “demonic” or “vile” in his actions or in his appearance. Moreover, European Christian eyewitnesses saw in him a very worthy, one might say, brilliant military leader, and one of the most principled and skillful opponents of Saladin. 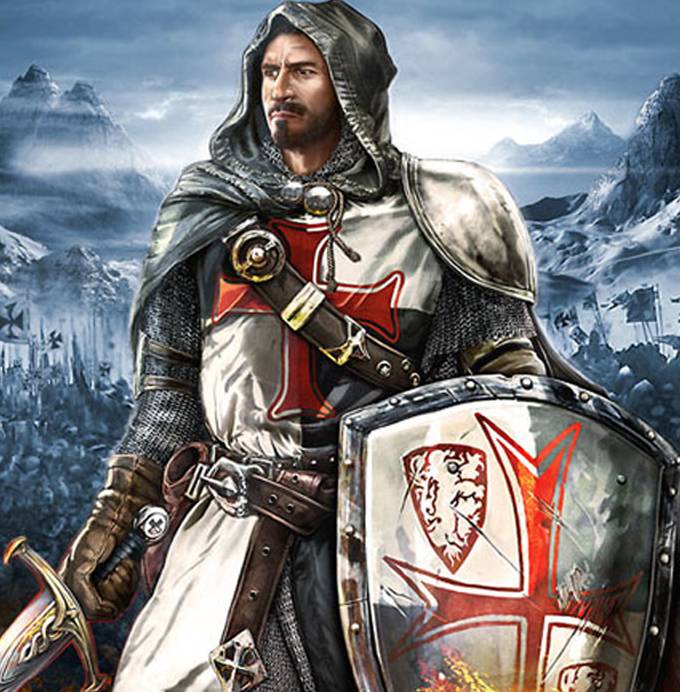 Not a single lifetime image of Renault de Chatillon survived, but he could well look that way - it is known that he loved to combine European weapons with Bedouin’s attire, and his warriors, like the Templars, fought in white surcoats with red crosses.
(Image source: http://magicjournal.ru/content/uploads/2015/04/templ.jpg)

Renault de Chatillon was born in France to the family of a middle-class knight; in 23, he took part in the crusade of King Louis VII, remained in Syria and gained favor with Raimund de Poitiers, ruler of the principality of Antioch. After the death of the old prince, a tall, beautifully built, physically very strong knight and obviously very charismatic (his description was preserved, for example, in the work of such an eminent chronicler as Wilhelm of Tire) twirled the affair with his young widow and soon married her, suddenly becoming, thus Prince-Regent of Antioch (with the eldest son of the deceased ruler).

It would seem, well, what else is needed for happiness? However, the adventurous life of this man, as it turned out, was just beginning. The Byzantine emperor Manuel Comnenus (1118-1180, on the throne with 1143), who was the supreme overlord of the principality of Antioch, pulled him into confrontation with Cilician Armenia, promising to generously pay for military expenses. As a result, the Prince Regent, who seriously invested in military spending (including even taking a loan from usurers), the Byzantines simply “threw”, without paying anything. Angry Renault de Chatillon decided to take revenge for the perfidy of the Byzantines, and in an unusual way. And then the first time showed his leadership talent - he very skillfully carried out not only land, but also amphibious operations, and the nearest Byzantine possession to the principality of Reno was Cyprus. In deep secrecy, the count prepared several ships, loaded the soldiers on them and, choosing the time when the Byzantine squadron was not nearby, carried out a daring operation, landed on this island. The output was more than compensated for the entire debt, and the squadron of the Antiochian consort triumphantly returned to the harbor of Lattakia (yes, the one that is still functioning and famous in modern Russia thanks to the Syrian express train). 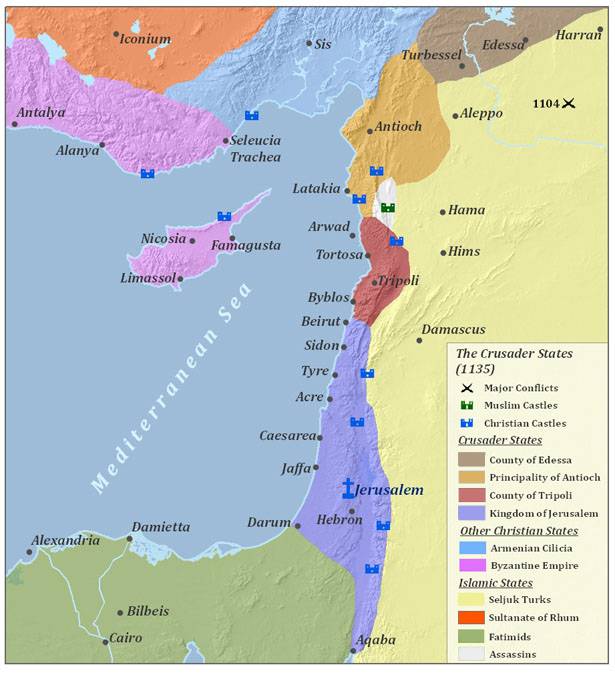 Crusader states and their opponents in the Levant in the XII century.
(Image source: http://explorethemed.com/Images/Maps/Crusade_2.jpg)

However, the emperor Manuel Comnenus did not at all consider the "incident settled"; he gathered a large army and marched on Antioch. The war was only repaid through the mediation of King Baldwin III of Jerusalem (on the throne in 1143-1163), but Reno was forced to return the booty and perform the process of begging for forgiveness.

After that, instead of quietly sitting on the throne of Antioch, the prince regent, even without the financial ability to assemble a large army, began to wage a “small war” against the neighboring “Saracen” lands. Here he successfully for several years showed his talent as a master of action with small forces in daring raid operations, bringing the local emirs to a state of “white heat”. However, in the 1161 year (at the age of 37 years), he, with a squad of 120 riders and 500 infantry, still gets surrounded by numerous and mobile Muslim troops. In this battle, two more traits of Renault de Chatillon's character appeared - even after seeing the hopelessness of the situation, he did not abandon his infantrymen and did not run; and, participating in the battle, he fought to the end, not intending to surrender, although in the end he was captured alive.

His winners, knowing that this was the prince-regent of one of the largest states of the Crusaders, and knowing about his courage and competence in military art, asked for a monstrous ransom for his freedom - which he himself and the aristocracy of the principality refused. During the time spent in custody, Prince Reno learned Arabic, learned the Quran and the Sunnah, and learned the traditions and customs of the Muslims well. However, this did not at all lead to his conversion to Islam (on what the jailers insisted, even offering him in this case a large feudal possession), nor added sympathy to this religion. As a result, after long 15 years of imprisonment, Muslims gradually reduced the amount of the ransom — from 300.000 gold dinars to 120.000 — and the prince regent was the last Christian prisoner of knights to leave Aleppo prison. This sum, still gigantic for that era, was collected from various sources, but the king of Jerusalem, Balduin IV, contributed the bulk of it.

There was no point for the prince to return to Antioch - his unfaithful wife died, the legal heir ascended the throne, and Reno entered the service of the ruler of the Jerusalem kingdom. In 1177, he was part of the famous Battle of Montjisar as part of the army of Balduin IV, and, apparently, is one of those military leaders who help the young king win a brilliant victory over a much larger Muslim army. And apparently, Balduin IV never regretted the redemption paid for Renault.

Here, the former consort of Antioch was again lucky - knowing about his talents and abilities for raid operations, the young king makes him the lord of the strategically important principality of Transjordan through marriage with Stefanie de Mille (c.1150-1197), who had already lost two husbands by that time. This princedom (Oultrejordan) covered at that time a large, sparsely populated territory from the Dead to the Red Sea, i.e. modern southern Israel, the land of the biblical tribes of Edom and Moab. 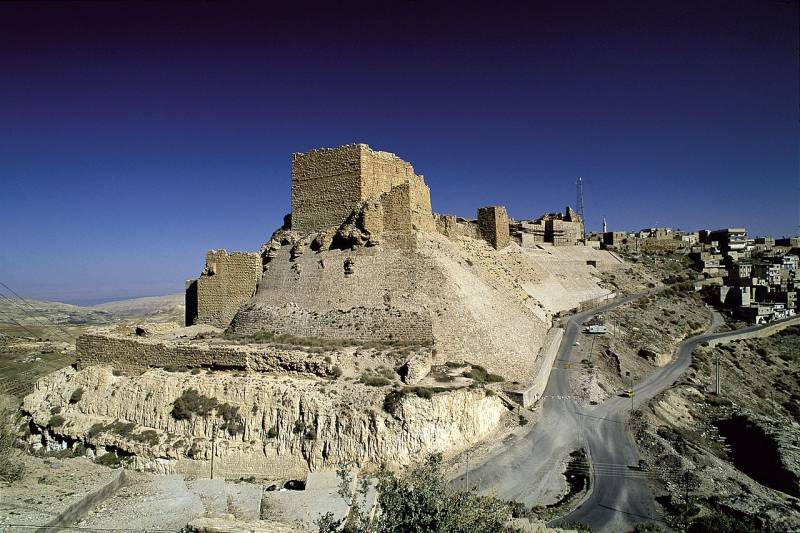 Krak-de-Moab Crusader Castle Ruins, Moabite Stronghold, among the Arabs - Al-Kerak; is currently in Jordan, near the village of Kharakka (Image source: https://commons.wikimedia.org/wiki/File:Karak_Castle_2.jpg?uselang=fr).

This lord held a dominant position between Egypt and Arabia, and its 7 castles (the most important of which were Crac de Moab, Mont Royal and Val Muise), lined up from the Dead Sea through Wadi al-Arab to the Gulf of Eilat, reliably blocked the caravan routes between neighboring Muslim regions. The ruler of Jerusalem knew who to appoint there, and the strategic lord was in the hands of a competent commander who had experience in raid operations in deserted areas, and also perfectly aware of local conditions and traditions. The importance attached to the Kingdom of Jerusalem in Transjordan underscores the fact that it was long owned by Stephanie’s father, Baron Phillip de Mille, who became the Grand Master of the Templar Order — that is, apparently random individuals did not control these important lands. 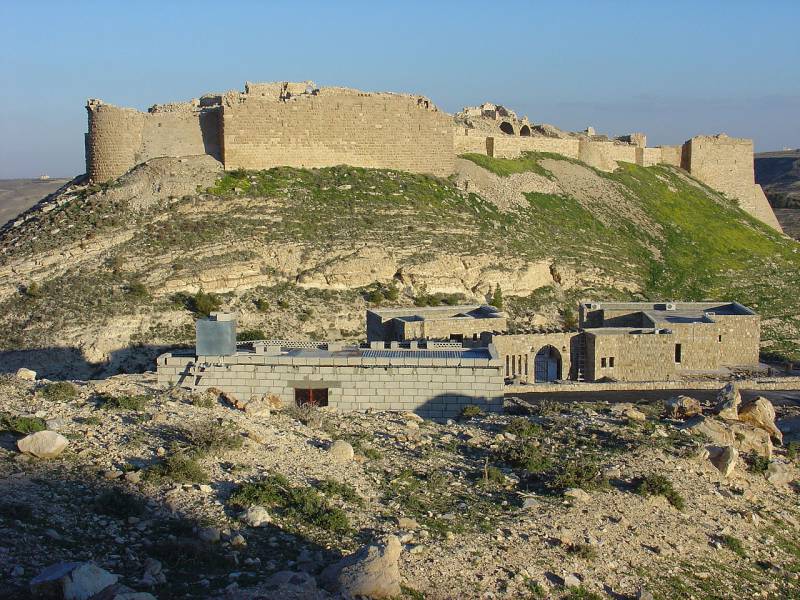 The ruins of the crusader castle of Krak-de-Mont-Real, “The Stronghold on the Royal Mountain”, by the Arabs of Al-Shaubak, are located in 50 km. southeast of the Dead Sea. Currently located in Jordan. (Image source:
https://commons.wikimedia.org/wiki/File:Jordanien_Shobak.jpg?uselang=fr ).

Traditionally, Renault de Chatillon is considered such a knight-robber, an insane disruptive head, a robber of caravans for profit. In fact, this is absolutely not the case - if he was a madman, then it was precisely the brave in battle, and at the same time a very competent military leader. The fact is that if the newly-made ruler of Transjordan wanted exactly the acquisition of wealth, it would be beneficial for him to continue the peace-loving policy of his predecessors on the throne as a whole - when for a certain fee Muslim merchant and pilgrim caravans could freely pass through the southern part of the Kingdom of Jerusalem. However, the "Prince of Keraka" was not just a confidant and one of the best generals of Balduin IV. Based on the available information, it can be stated unequivocally that Renault de Chatillon conducted well-thought-out military operations that were largely coordinated with the King of Jerusalem, which created (by their own admission) very big problems for the economic and military interests of Muslim opponents of the Jerusalem kingdom. 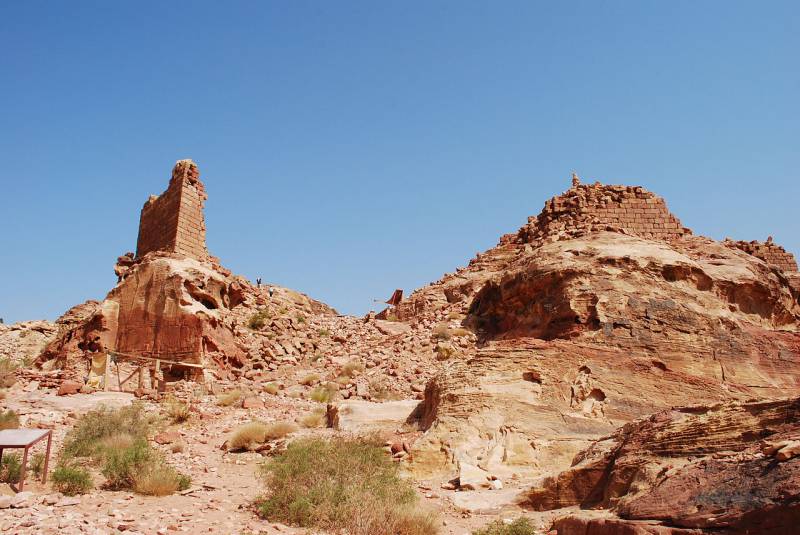 The ruins of the crusader fortress Le chateau de Val-Moise, "Castle in the Valley of Moses", the Arabs - Al-Habis; located in 100 km. north of the port of Aqaba, in Wadi Musa. Currently located in Jordan, near the famous city-necropolis of Peter. (Image source: https://commons.wikimedia.org/wiki/File:20100926_petra058.JPG?uselang=fr).

It can be assumed that Balduin IV and Prince Reno together developed a daring plan to carry out a strategic operation against the state of Saladin. Of course, no documents about this have been preserved, but this confirms a simple fact: during 13 years, from 1174 to 1187, the King of Jerusalem and the lord of Transiordan jointly strengthened the already existing and built new castles and forts, spending on it the amount of 140.000 gold dinars. Agree, this activity in its long-term nature and scope somewhat different from the banal feudal whim? But the assumption that both Jerusalemites simultaneously created a serious defensive line, blocking communication between the three Muslim regions, and a network of resource bases that allowed operations, both against Egypt and against the territory of modern Saudi Arabia.

An important step against Muslim domination in the region was the operation of Renault de Chatillon to seize the port city of Islay (modern Aqaba-Eilat). In December 1170, Saladin’s forces landed on Gray Island (Pharaoh’s Island) from present-day Aqaba and captured a small Crusader fort named after деle-de-Gray. The Muslims expanded the fortress by renaming it to Islay, placed a large garrison there and blocked the exit of the Kingdom of Jerusalem to the Red Sea. Thus, the only Christian port where merchants from Oman, Iran and India could pester with goods of the East was destroyed, and the Egyptian merchant trade monopoly on trade with the ports of the Indian Ocean was restored.

And so, in the year 1181, recalling his experience in the naval operation, the ruler of Transjordan decided to restore the power of the European crusaders over the port of Eilat. He assembled shipbuilders, bought wood and built 5 ships (while somehow keeping secrets from the mass of agents of Saladin!), Who passed the "sea trials" in the Dead Sea. After that, the galleys were dismantled and camels, along with a small army, sent to the Gulf of Eilat. There the ships were re-assembled, and the Muslim fortress-port was besieged (in November 1181 of the year) also from the sea. Let me remind you that we are talking about the events of the XII century, the seemingly dense Middle Ages, and supposedly stupid knights-crusaders.

“Saracens” immediately clearly realized the goal pursued by Renault de Chatillon. Here is how the Muslim chronicler Abu Sham writes about this in the "Book of two gardens in the news of two dynasties": “... Prince Arnod planned to seize the fortress of Ayla, which rises from the bay and blocks the entrance to the sea; penetrate as far as possible into this sea, whose coast borders with their countries. The detachment, which moved along the coast to Hijaz and Yemen, was to block the road for pilgrims performing the hajj and block the entrance to the valley of Mecca. The Franks were going to seize the merchants of Yemen and the merchants of Adan on the sea, to occupy the coast of Hejaz and seize the entire Sanctified Land of the Prophet, inflicting the most cruel of blows on the Arabian Peninsula! ... ” Thus began one of the most daring crusader operations of the Crusaders, whose goal was to march on the lands of modern Saudi Arabia. If Muslims repeatedly set as their goal the seizure of Jerusalem, the Christians for the first time decided to make a trip to Mecca and Medina. According to Arab eyewitnesses, "the world of Middle Eastern Islam froze in horror."