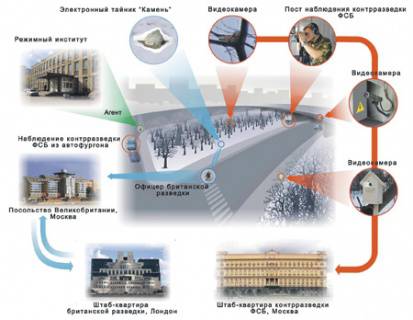 In the popular Soviet TV series “Seventeen Moments of Spring”, Stierlitz's courier, Professor Pleischner, delivers the encryption of a Soviet scout in a capsule that he hides in his mouth. In case of danger, the small capsule had to be swallowed, but the professor did not notice the “flower” signal on the windowsill and he himself passed the secret message to the enemy. So the Soviet viewer was clearly shown one of the real caches with a container for delivering an important spy story.

В stories special services to caches and containers rightly assigned one of the places of honor. The young "Stirlitz" in special academies must learn the basics of the correct choice and practical manufacturing of containers, their competent operational use for communication with their future agents. Containers contain hidden cavities, access to which is closed by special locks with special secrets. In the twentieth century, for the opening of containers, as a rule, a sequence of unnatural twisting, turning, pressing was used, for example, left-handed thread was especially popular. A hiding place is considered to be a previously agreed place in the city and in the countryside, where the container for the agent or operational intelligence officer is hidden.

As the CIA veterans write in their memoirs, in American intelligence the containers were divided into active and passive. The active ones had an obvious working function, such as a lighter, and then a pen with a T-100 / 50 micro-camera for the CIA Ogorodnik agent, which he used to capture secret documents in the Soviet embassy in Bogota and later in Moscow, working in the Ministry of Foreign Affairs.

The passive container, for example, a statuette, has no functions, but contains a cavity for storing important documents. The CIA practiced the delivery of cipher-notebooks inside inexpensive souvenirs that did not have any locks, but simply broke up to get an attachment. Such containers were called disposable; they were prepared individually for each operational officer and agent.

At the height of the Cold War, the CIA station in Moscow, actively using containers and caches, made a principled decision to abandon bricks and wooden bars as “disposable” or, as they were sometimes called, “junk” containers, and replaced them with fake hollow stones. Americans rightly believed that practical Muscovites in the conditions of the then shortage of building materials would surely pick up a weighty piece of board with undercover materials inside, which could not be allowed. And because Martha Paterson, a young CIA officer, for laying a cache on the Krasnokholmsky bridge, was already carrying “in the bosom” not a piece of wood, but a large plastic container- “stone”, which consisted of two halves fastened together with screws and rubber glue. 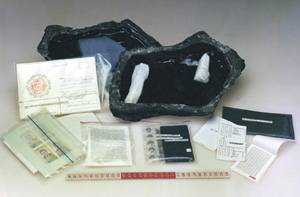 Construction and contents of the container "Stone". Photo courtesy of the author
Containers for long-term storage were made of high-strength alloys with waterproof lids. As a rule, illegal immigrants and especially valuable agents used them when, when they received a danger signal, they had to urgently change documents and quickly stock up with a decent amount for an emergency escape to another country or back to their home. One such cache, full of documents and money, neatly buried in a quiet place, disappeared in the most banal way, since a motorway was soon built over it, completely blocking the way to the cache, for which the intelligence officer paid for his safety and could not get acquainted with road expansion plans.

In Moscow, in the Museum of the Border Guard Service of Russia, one can see diplomatic suitcases-containers in which the Japanese tried to transport people who were valuable for reconnaissance, albeit not in very comfortable conditions. In 1965, the Egyptian security services wanted to secretly take Israeli agent Mordechai Lauka in a special suitcase from Italy, pumping him up with drugs. The agent could have suffocated during the flight, but his life was saved due to the delay of the flight and the vigilance of the Italian customs, who found a moaning man hanging inside a suitcase on special straps. During the Cold War, Western intelligence agencies prepared special refrigerated boxes and car cavities for secretly transporting a person weighing up to 110 kg and growing to 2 m. A person could be in such containers up to 8 hours using urination bags, absorbent sponges, food, water, bags with ice, heating elements and fans. The main limitation was the supply of oxygen for breathing.

Throughout recent history, it was fashionable to dig tunnels, dig, hide and work in special shelters and caches. An excellent example of conspiracy, ingenuity and craftsmanship is the underground printing house of the Bolsheviks, which has not been deciphered by numerous agents and provocateurs of the tsarist police. In 1925, the Georgian communists restored the printing house as a museum, which is now carefully preserved in Moscow, Forest Street, by the staff of the State Museum of Modern Russian History from the effects of time and from the active attempts of neighbors to throw away "this old stuff" and finally open a real and modern urban “masterpiece” - a boutique, sauna or massage salon. 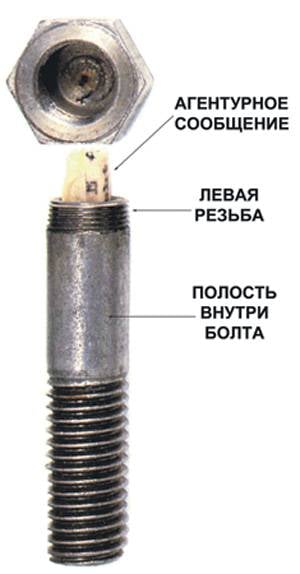 Container "Bolt".
For covert photography there was a large arsenal of a wide variety of containers for installing photographic equipment - from brooches, buckles and buttons on coats to radio receivers, umbrellas, books, and even thermoses with coffee.

Stationary photo containers, one of which, created by the inventive staff of the 7 Office of the KGB in a flower box on the upper floor balcony, made it possible to photograph the texts of secret documents carefully removed by the spy Penkovsky on the windowsill at home. These photographs of the Seven became one of the main evidence in the case of the agent of two intelligence services.

Especially carefully hid secret information when necessary delivery, for which many a variety of containers with destruction were developed. A very original example was shown by Czechoslovak intelligence, having made a container in the form of a plastic case for soap. Inside this “soap box” an unmanifested film with secret information was wound on a photo flash, which worked when opening the lid without a key-magnet and instantly illuminated the film. Polish intelligence placed thin-walled aluminum microfilm cartridges with information that could be destroyed by lighting a cigarette.

Legendary illegal intelligence officer Rudolf Ivanovich Abel was armed with numerous containers for storing and delivering intelligence information. The most famous were opening coins, as well as cufflinks and special, hollow nails and bolts inside, where he stored microdots — tiny film flakes 1 by 1 mm in size, which were photographed with reduced images and texts from the A4 format. It is known that in search of microdots and caches with information, the FBI officers during the arrest of Abel broke even his favorite guitar into pieces.

"Coin" with a cavity for micro-points

In 2006, the FSB showed a documentary about the use of "electronic cache" hidden in an artificial stone by British intelligence in Moscow. Inside were placed the receiver, transmitter, computer and power supply elements. Passing by the “stone”, the agent secretly transmitted his report using only the keyboard of a standard cellular phone or other personal electronic device. In advance, after the preparation of the message, the device was transferred to the transfer mode. When the agent passed near the “stone”, the device from the agent’s pocket continuously sent a low-power radio signal. Then, the device automatically received a confirmation signal from the “stone” and transmitted encrypted information to it in the performance mode. If there were messages for the agent in the “stone”, they were also automatically transferred to the device in his pocket if the agent was in the near zone from the “stone”.

With the apparent convenience in such an electronic cache, it is necessary to periodically charge batteries or change batteries, and also completely replace the “stone” for repair, forcing British diplomats, as seen in the FSB film, to wander in the dark at the roadside, masquerading as homeless collecting branches for a night fire. It can be assumed that the intelligence officers of Her Majesty will be able to reduce the electronics of the “stone” to matchbox size and even less, but with all the desire, the power supply unit must be energy-consuming and therefore large enough, and besides, the whole design must be airtight, impact-resistant and frost resistant container.

Despite the active onslaught of digital technologies, it is difficult to imagine another way of transferring documents, special equipment and money to an agent without secret caches in the secret services of secret services. And that is why the most exciting literary episodes of spy capture describe an ambush of counterintelligence near the place where the cache was laid in an effort to determine the identity of the agent who should remove this cache. 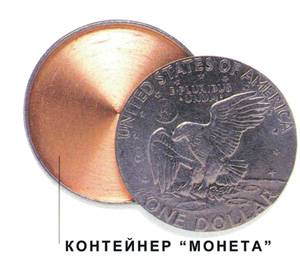 And this is how an extremely flat container looked like that had a special cavity inside. Illustrations provided by the author.
At the end of the day, the brigadier, who was not graced over the years, was shown the author of the article during a training trip with outdoor sports. It turned out that the brigadier was recently awarded a government award for deciding to cover a strange figure with a piece of cardboard that a foreigner, who was an "on duty" outdoor object that day, was trying to imperceptibly draw a shoe on the asphalt. The brigadier assured the management as much as possible to organize covert surveillance of this place and then, when it seemed that every conceivable and inconceivable time for the ambush had already passed, the cardboard box was casually pushed aside by the modestly dressed "village worker" who later became an engineer of the provincial defense enterprise. And a strange, at first glance, figure painted by a foreign boot on the asphalt was a tag-signal, which meant laying a cache. The further active development of the “worker” by counterintelligence allowed to neutralize the agent who supplied the foreign intelligence officer with military secrets of the USSR.

In another episode of the Cold War, the ambush at the hiding place was not so successful. In 1985, an FBI employee picked up an empty Coca-Cola can, which was left on the side of a country highway by a former US Navy cryptographer, John Walker, who supplied Soviet intelligence with secret documents about military encryption and cryptography systems for years to 17. Walker left the bank as a signal to set a cache for a Soviet intelligence officer, whom the FBI planned to take red-handed at the time of the seizure of the secret documents prepared by the agent. The young American counterintelligence officer mistakenly took the bank for Walker's container, took it away and, thereby removing the cache readiness signal, saved the Soviet employee who didn’t see the signal bank in the proper place and returned to the residency.

It remains to wish the future employees of the Russian intelligence and counterintelligence observation, patience and diligence, resourcefulness and reasonable initiative, and “Lady Luck” will be on your side.