Zinaida Tusnolobova-Marchenko: the war took away arms and legs ...

6 2016 June
22
History The hero of the Soviet Union, Zinaida Mikhailovna Tusnolobova-Marchenko, in whom the war took her hands and legs, causes tears in me. I think many of you, dear readers, will feel the same after learning about her fate.

Zinaida was born in Belarus, in a peasant family. However, on the Shevtsovo farm of the Polotsk district of the Vitebsk region, the Tusnolobovs did not live long: when Zina graduated from a seven-year school, the family moved to Leninsk-Kuznetsk, in the Kemerovo region.

Shortly before the outbreak of World War II, his father died. To help her mother, Zina got a job at the plant as a laboratory chemist. In many sources, it is written that in the spring of 1941 she, a twenty-year-old girl, was married to Joseph Marchenko. However, there is a published interview with the adult son Zinaida Mikhailovna and Iosif Petrovich, Vladimir. He claims that there is a mistake: before the war, his parents only met, but did not have time to get married.

So, the Great Patriotic War began. Shortly before it began, Joseph was sent to serve in the Far East, and from there he went to the front. Zina was not going to stay in the rear either. She graduated from the nursing courses and volunteered. She was sent to the 849 Rifle Regiment of the 303 Rifle Division. So the girl began a new life.

... In the summer of 1942, the regiment fought near Voronezh. And along with the regiment - Zinaida. She, despite her fragile appearance, went on the attack without fear of any danger. On the battlefield, she rendered first aid to the wounded, pulling them out on her. For three days, the nurse Tusnolobova saved more than forty lives (in some sources - twenty-five). For this she was presented to the Order of the Red Star. Zinaida tried to refuse the award. She believed that she did not need advances. Yes, yes, the girl thought it was an advance ... "Dear mother, brother Zhenka," she wrote home. - I am writing to you from the burning land of Voronezh. If you only knew what was going on here. Day and night, the earth groans. There is a bloody battle. But you do not worry for me. The bullet is looking for the timid, and I, you know, not one of those ... "

2 February 1943 of the year. Zinaida has been in the army for eight months, in her personal account 123 saved lives. The battle at the station Gorshechnoe Kursk region, the Nazis are in a ring, furiously trying to get out of the environment. Zina - on the battlefield, helps the soldiers. “Commander was wounded!” She heard a scream and rushed to help. Around the shells exploded, the girl was wounded in the leg. The boot began to pour blood, but the nurse did not intend to leave her battle post. She knelt, crawled to look for the commander. Yes, I did not have time: Mikhail Tymoshenko was already dead. The girl noticed his tablet, miraculously survived. I crawled to it, hid it in my bosom - and again there was an explosion ...

... She came to when the Germans launched a counterattack. “Many fascists walked around the field and finished off the wounded,” said Zinaida Mikhailovna. - Seeing this, I pretended to be dead. A fascist approached me, began to hit on the head and in the stomach with something heavy, I think, with a butt. Then the boots went into action. I lost consciousness again ... "

Late at night Zinaida woke up again. She could not move and prepared to meet death. But fate gave the girl a chance: it was at this time that our reconnaissance group was passing next to her. Zina wanted to call for help, but her language did not obey, the sounds did not add up to words. Then, with all her strength clinging to hope, the nurse groaned - loudly, painfully, desperately. And they heard it! Her body had to be beaten with Finns - the blood turned into ice, chained Zina to the ground.

Brought to the medical unit. Doctors decided that the young body itself will be able to find the strength to deal with bruises. Therefore, they, having rendered first aid, asked the locals to take Zina to themselves. An elderly woman, a widow, responded to the request. Zina lived with her for about a week and really got better at first. But if the body was still able to overcome bruises, but was powerless before frostbite. The girl was very bad, frightened widow again took her to the hospital. It turned out to be very timely: the gangrene of the arms and legs began. It was about saving lives. Zina was transported to Sverdlovsk, to the hospital. The surgeon, Nikolai Vasilyevich Sokolov, amputated the girl’s right arm (up to the elbow). The battle went on for several weeks: the doctor, as he could, fought for the life of a brave nurse. But he had to perform three more operations: Zina lost her right leg (up to the knee), half of the foot of her left leg, and her left hand ...

Another fact: the hospital was desperately short of medicines. The last two operations were carried out with such a small amount of anesthetic that, one can say, completely without it. “I can take it all, doctor,” said Zina. “Just save my life ...” 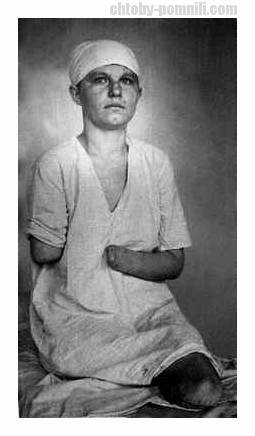 Struck by the girl's courage, Nikolai Vasilyevich made a special cuff for her hand for her, so that she could somehow wield her right hand (later the girl learned to even use it to write). Then the doctor convinced the patient of the need for an additional operation: he made a complex incision on his left hand, it turned out something like two fingers, which he sheathed with skin. And over time, the girl was able to hold light objects with them, even using a fork and a spoon!

Until mid-spring 1942, Zinaida stayed in the hospital. In the same place with her there was such an episode. The nurse was in the ward, which was on the first floor, the windows were open. A fighter passed by, looked in, saw a beautiful girl and joked: “Beauty, let's go, go for a walk?” And what did Zina say? "I have no hair." She didn't even cry. That fighter cried, having entered the chamber and saw whom he had invited to walk. He knelt down and exclaimed: "Forgive me, sis!".

Meanwhile, Joseph Marchenko was very worried about her. He did not receive letters that came before regularly. He himself wrote often - but as if into a void. And finally, I received the long-awaited news ... "My dear Joseph! I do not know where, under what circumstances this letter will find you. I am writing everything as it is, without hiding anything. Cheating, you know, I never knew how. An irreparable misfortune struck me: I lost my arms and legs. It is bitter and insulting to remain disabled at twenty-three. Apparently, my song is sung. Be free, dear. Do as you see fit for yourself. I can not, I have no right to become an obstacle in your way. Arrange your life. Goodbye..."

Having sent the envelope, Zina waited for an answer with great impatience and excitement ...

And hopes were justified. Joseph sent the answer: “My dear sufferer! No misfortune and trouble can separate us! There is no such grief, such torments that would force you to forget, my love. Both with joy and with grief - we will always be together. I am your former, your Joseph. Just to wait for victory, just to return home, and we will live happily. Yesterday, one of my friends asked about your letter. He said that, judging by my nature, I have to live well with you in the future. I think he correctly identified. That's all. Write more than once. Soon go on the attack. I wish you a speedy recovery. Think nothing bad. I look forward to the answer. I love you very much, your Joseph. " How Zina was delighted to receive such a message! She seemed to start another life. Full of difficulties, pain, but with hope for the future happiness. 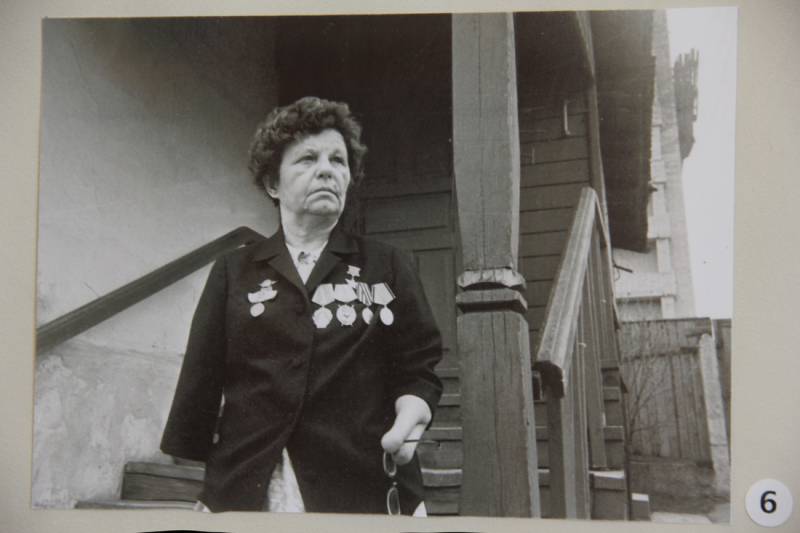 Zina's character did not allow her to do nothing, the girl really wanted to somehow bring our victory closer. But what could she do in her present situation, what did she have? Just a word. The girl began to write letters to the front, our fighters. She appealed to them, strangers, told her story, asked to avenge her (soldiers read one of her letters before the storming of Polotsk). In addition, she asked the workers of the Uralmash plant, who took patronage over her, to take her to one of the workshops.

At lunchtime, the workers brought nurse Zin Tuslolobov to the workshop. What silence reigned ... And the girl got up, as best she could, on a stretcher and said something like this: “Dear comrades! I am twenty three years old. I did very little to do for our Victory. I managed to take out more than one hundred and twenty wounded from the battlefield. Now I can’t fight and I can’t work. I now have neither arms nor legs. It is very difficult, very painful, to stay away. I ask you: make at least one rivet for me for tank! "

By the end of that month, workers had released five T-34 over the plan. On each was the inscription: "For Zina Tusnolobova!". The same inscription appeared on the trunks of guns, mortars, on airplanes — wherever the soldiers received Zina's fiery letters (she also wrote an address in the newspaper “Forward, at the enemy!”).

In the winter of 1944, Nikolai Vasilyevich Sokolov, the same surgeon who operated on Zina, took her to Moscow, to the prosthetic institute. The girl began to learn to walk again. I must say, and at the institute she continued to write to the front. And she received answers - in total, about three thousand stay here! Surprisingly, the girl answered almost everything.

... Finally, the war ended. Joseph Petrovich returned, the young family began to live in Polotsk. They had two sons, but another misfortune happened: both boys died. Then came the son of Vova and daughter Nina. Iosif Petrovich, as he dreamed, smashed a large apple orchard. Zinaida Mikhailovna herself managed the household. She also engaged in a huge social work: she went to enterprises, schools, spoke on the radio. Letters from different cities of our country came to her - and again she found time and energy to respond to them. Never, not for one day, did Zinaida Mikhailovna forget the doctor who gave her a second life. Here is one letter to Nikolai Vasilievich: “Joseph and I returned to Polotsk, planted a garden. Maybe this is happiness? So that the garden would flourish and grow children. Just think, Little Johnny is already in the eighth grade, and Ninka-Egoza has been going to kindergarten for the last year. It is late evening, my noisy family has calmed down, everyone is sleeping, and I am writing you a letter. All my family wishes you, my dear doctor, health, happiness, great success. Come to us in the summer for apples, Nikolai Vasilievich! Take the whole family with you! We will go to the forest for mushrooms, fishing. And most importantly - you will see how I independently learned how to cook, heat a stove and even darn stockings for children. Ardently loving you Zinaida. 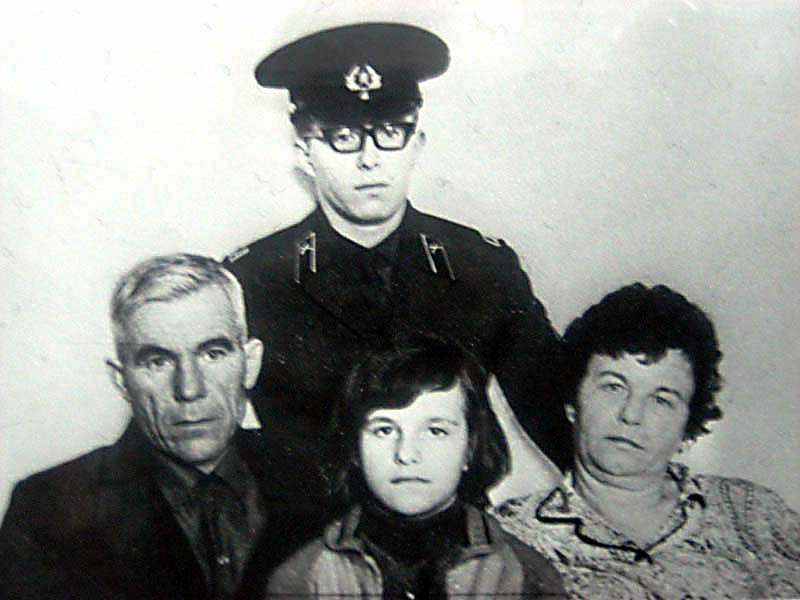 6 December 1957 of the year Zinaida Mikhailovna Tusnolobova-Marchenko was awarded the title Hero of the Soviet Union ...