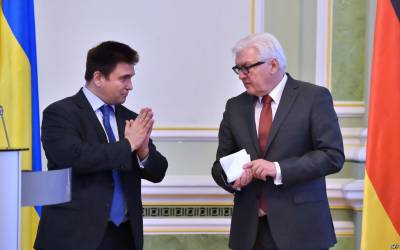 On Tuesday, the Minister of Foreign Affairs of Ukraine, Pavlo Klimkin, visited Berlin with an unplanned visit. In German diplomatic circles, they noted that the Ukrainian minister had come to “ask for clarification” from the German colleague Frank-Walter Steinmeier “in connection with his statements about the possibility of phasing out EU sanctions imposed on Russia for its actions to destabilize the situation in eastern Ukraine”. Local media rated the visit easier: "Klimkin came to sort things out."

Pavel Klimkin in Berlin know for a long time. At one time he was here the ambassador of Ukraine. Since then, according to German experts, he has developed quite partnership relations with the current German Foreign Minister Frank-Walter Steinmeier. However, the topic for negotiations (sanctions against Russia) was very inconvenient for the head of the German Foreign Ministry. Recently, contrary to the position of officials and EU diplomacy, Steinmeier has repeatedly spoken about easing sanctions against Russia and even their phased abolition.

In response to Steinmeier’s regular statements, he is also regularly twitched publicly by German Chancellor Angela Merkel. She notes that “she sees no reason for lifting or easing sanctions against Russia.” Merkel last made such a statement last Friday, shortly after Frank-Walter Steinmeier admitted to the media that it was becoming increasingly difficult to negotiate anti-Russian sanctions. And then, in an interview with the magazine Der Spiegel, he said that "the German government is considering the possibility of a gradual lifting of sanctions against Russia."

Steinmeier determined this possibility by the progress in the implementation of the Minsk agreements. Even with this caveat, the opinion of the German Foreign Ministry was strikingly different from the position of the European Union, which is linked by the lifting of economic sanctions from Russia with the absolute implementation of the Minsk agreements. Chancellor Merkel is in solidarity with European officials, so once again she disavowed the statement of her minister.

However, the point is not only in the position of the European Union. Steinmeier’s activity almost coincided with the meeting of the leaders of the G7 countries. This summit did not produce any significant decisions, except that, under pressure from Washington, the G-7 countries agreed to extend economic sanctions against Russia. Now Chancellor Merkel is working out this decision.

For the United States, lifting the sanctions means easing the pressure on Moscow, easing the anti-Russian front they have already formed. In addition, Americans use the current situation to create certain competitive advantages for their companies. Such rules of the game quite suit them.

For Ukraine, the abolition of anti-Russian sanctions means a diplomatic catastrophe. After all, today, sanctions are perhaps the only serious form of support by the West for the current Kiev authorities. With their abolition, Ukraine will finally lose support, especially in Europe. That's why Pavel Klimkin hurried to Berlin to “clarify the relationship”.

At the final press conference of ministers, Klimkin called counterproductive "any signals hinting at the possibility of premature easing of sanctions" and stressed: "only if the key, fundamental provisions of the Minsk agreements are fully met, is it permissible to speak of easing or lifting sanctions."

Steinmeier defensively defended himself: “No one questions the close linkage of sanctions with the progress in the implementation of the Minsk agreements. My suggestion is to deal with the tool of sanctions more intelligently than in the past. ” The German minister suggested “thinking about how to react with sanctions if significant progress is made.”

Experts are wondering why all of a sudden such a mimicry happened to Steinmeier. No one connects this with the demanding tone of the Ukrainian minister. Everyone knows that in the “Norman format” Pavel Klimkin takes a place, as they say, at the side table and is not even always invited to participate in negotiations. And suddenly - this is the result of the meeting. After her, Steinmeier clearly corrected his rhetoric.

It seems it’s all about the upcoming NATO summit in Warsaw in July. His training is now actively covered by American and European media. They show that the Warsaw meeting of the leaders of the countries of the North Atlantic Alliance will give it a new anti-Russian impulse. Therefore, this is not the time to ease the pressure on Russia. Someone is well convinced in this chapter of the German Foreign Ministry. The Ukrainian minister only took advantage of the situation.

Sanctions as a barrier to the global world

The current package of sanctions expires on July 31. Many already understand that the sanctions policy does not match the nature of the modern global world. They prevent not only economic, but also political, humanitarian relations. They squeeze the living space of people on the planet by about a fifth of it.

Steinmeier was not sly when he spoke about the mood in the German government. For example, the Minister of Economy and Energy, the leader of the German Social Democrats, Sigmar Gabriel has repeatedly called for the gradual lifting of the restrictions provided for in the sanctions package.

Similar opinions are expressed by the politicians of Austria, Hungary, Greece, Italy, Cyprus, Slovakia, France. Among them are current ministers, a member of governments. Thus, last week the head of the Hungarian foreign affairs ministry, Peter Siyarto, said that Budapest did not intend to extend the sanctions automatically.

On Monday, it became known that in the middle of the month, Italian Prime Minister Matteo Renzi would arrive in St. Petersburg to participate in the economic forum. According to Russian Deputy Foreign Minister Alexei Meshkov, who is referred to by RIA News, in the framework of Mr. Renzi’s visit, “Russian-Italian contacts will take place aimed at improving the situation with trade between the countries”.

Plans to visit the St. Petersburg forum and meet with Russian President Vladimir Putin were announced by the President of the European Commission, Jean-Claude Juncker. As the American newspaper The Politico writes with reference to diplomatic sources, this decision caused outright discontent in the United States, Great Britain, some other EU countries and even in the European Commission itself.

According to The Politico, some representatives of the Juncker apparatus advise him to refuse to participate in the St. Petersburg Economic Forum due to the “delicacy” of the sanctions issue. The publication notes that if Jean-Claude Juncker arrives in St. Petersburg, he will become the first European organization leader to visit Russia since sanctions were imposed against Moscow in March 2014.

The position of critics of the head of the European Commission was publicly expressed by the Minister of Foreign Affairs of Lithuania Linas Linkyavichus: “Meetings just for the sake of the meetings themselves do not add value to relations between the EU and Russia. The Kremlin uses meetings to create the impression that business continues as usual and projects this impression to its own public. ”

Political pressure on Juncker is growing. He has to justify himself, to explain his intentions that he will use the trip to the St. Petersburg forum in order to “openly talk about the prospects of relations between Moscow and Brussels.” In favor of the President of the European Commission, says that the leaders of the largest European companies said to participate in the forum. Among them are the heads of the German Siemens, the French Total, the trans-European Gunvor and Metro, the Swiss Glencore and others.

Business votes for the expansion of economic borders, the abolition of prohibitive measures and various kinds of sanctions. However, today it is not beneficial for the West, and not only for political reasons. He, among other things, is afraid of losing face. Norbert Röttgen, head of the foreign policy committee of the Bundestag, said quite definitely in an interview with Deutsche Welle: “Sanctions are Russia's political response. We are ready to take them off as soon as we see that Russia is curtailing its military presence in Ukraine and complying with the norms of international law. Otherwise, the West will lose its credibility. ”

Röttgen is worried about the authority of the West and its leaders in vain. Just the introduction of sanctions has decently undermined it in the eyes of business, objective politicians of many countries and ordinary people interested in communication, peace and tranquility on the planet. As for Russia, it has already become accustomed to living in conditions of sanctions, it is developing import substitution. It is possible that the lifting of sanctions can only prevent it ...

Ctrl Enter
Noticed oshЫbku Highlight text and press. Ctrl + Enter
We are
To achieve peace in Ukraine, the Germans did not have the courage?Is independent Europe possible? (Huffington Post, United States)
Military Reviewin Yandex News
Military Reviewin Google News
26 comments
Information
Dear reader, to leave comments on the publication, you must sign in.