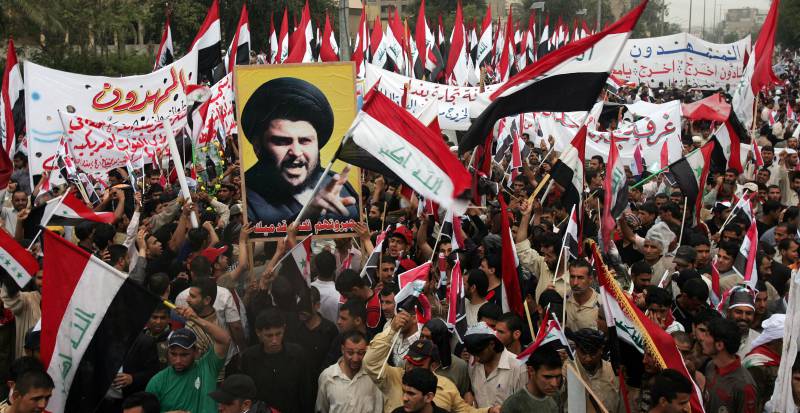 The political crisis in Iraq is fraught with new conflicts. The actual paralysis of the central government is already used by external players, aimed at the final division of the country. Small, limited sovereignty of state entities will be used to set on neighbors - first of all on Iran.

Western journalists covering events in the Middle East are increasingly using the term “failed state” in relation to Iraq. More rarely, this “most free” press tries to understand the causes of existing problems. But even when such attempts are made, they cause nothing but bewilderment. For example, the authors declare that the root of Iraqi misfortunes lies in multinationality and that the country was born only in 1932 year. However, there are two thirds of such young states in the world, and almost all of them are multiethnic.

Even more often, the regime of Saddam Hussein, who de cruelly oppressed all ethno-religious groups, except for Sunni Arabs, becomes the object of accusations. It is impossible to idealize either this ruler or the time of his reign. But to demonize Hussein is also wrong. Under him, all the major nations and denominations were represented in the top leadership of Iraq. The vice-presidents were Kurds Taha Yasin Ramadan and Taha Mohi al-Din Maaruf. The Minister of Foreign Affairs was Assyrian by nationality and Christian by religion Tariq Aziz. The Speaker of the Parliament was Shiite Saadun Hammadi, who, by the way, was named among the possible successors of Saddam Hussein. And when, after the occupation of the country, the Americans published a list of the most wanted functionaries of the regime for 55, 35 of them turned out to be Shiites. For all the excesses that occurred, Iraqi society remained tolerant and secular.

So the reason for the current state of Iraq should be sought already in this century. The US-led coalition invasion destroyed economic, administrative, and ideological braces. The resulting vacuum favored the degradation of public relations and the actual disintegration of Iraq along tribal, clan and narrowly confessional lines.

The US military administration only legitimized this split. Developed overseas Constitution enshrines the federal structure of the country. Regional authorities received the broadest powers, including financial ones, which led to the strengthening of local clans and tribes. The system of religious quotas imposed by the Americans, ostensibly for fair access to power of all faiths, also turned out to be a disservice. First, she ousted secular forces to the side of political life. Secondly, the government now resembles feudal feedings: all departments are divided between different clans, using the power to enrich and grow their influence. It is not surprising that the bureaucratic apparatus in the country is inflated to an incredible size: if, under Hussein, the number of civil servants did not exceed 1 a million people, now there are more than seven times.

Under these conditions, corruption has permeated the state from top to bottom. Its size was partially revealed by an investigation into the defeats of the Iraqi army in 2014, when almost half of the country was seized by the "Islamic State". It turned out, for example, that 55 thousands of servicemen were only listed on paper, while the allowance allocated to them went into the pockets of the generals. However, for the monstrous defeat and the flight of five divisions, none of the politicians and army officials incurred punishment. Only a few generals were solemnly retired ...

Towards a popular revolution

The situation in the socio-economic sphere, meanwhile, is close to catastrophic. A third of Iraqis, one of the leading exporters of oil, live below the poverty line. Constant interruptions in energy and water supply turn the life of the citizens of this hot country into a real hell. In this situation only worsens. As a result of the IS onset, the number of refugees inside the country exceeded 3 million. And the fall in oil prices hit the budget. With a total volume of trillions of dinars (about 107 billion dollars) in 100, the deficit is 24 trillions. Iraq has no other sources of profit. If under Saddam Hussein, mechanical engineering and light industry existed in the country, now Baghdad gets more than 99 percent of foreign exchange earnings from oil exports.

Last summer, protests swept through Iraq. Hundreds of thousands of people demanded reforms that would eradicate corruption and the dominance of religious parties. The demands of the protesters were supported by the spiritual leader of the Iraqi Shiites Ali Sistani. As a result, Prime Minister Haider Al-Abadi announced a large-scale reform of the state administration system, which envisages reducing the number of ministries, and most importantly, replacing the confessional principle of forming government bodies with a professional one. However, a significant part of the parliamentary factions blocked the changes. Among them was the “State of Law” faction, the nominee of which is the prime minister.

New performances began in February. This time their main organizer was Muktada al-Sadr. The world heard about him in 2004, when the Mahdi Army, headed by a 30-year-old charismatic Shiite theologian and politician, began an uprising against the occupying forces. After the withdrawal of foreign troops, it was transformed into a political movement - one of the most influential among the Shiite population. Al-Sadr himself withdrew from public activities. This lasted until 26 in February of this year, when a million-strong demonstration gathered in the central square of Baghdad. Al-Sadr demanded that the government undertake the promised reforms. Otherwise, according to him, the leadership will be swept away by popular anger. Muqtada al-Sadr also accused the authorities of depending on the United States, which, under the pretext of fighting the Islamic State, deployed over 4 thousands of servicemen in Iraq. The Shiite theologian called popular protests "a continuation of the struggle against the hated American occupation."

It may seem strange that a religious movement requires reforms, among which the first item is the abolition of confessional quotas. However, supporters of al-Sadr are the most disadvantaged segments of the population, most suffering from the crisis. Yes, and the Shiite theologian himself emphasizes the desire to rally all faiths and political forces for the revival of Iraq. For example, he pointedly supported the speeches of the Sunnis, who in 2012 — 2013 had protested against infringement of their rights. And now the protests have brought together a variety of groups, including secular. As a member of the Politburo of the Iraqi Communist Party, Yassim al-Hilfi, stated, "we are working together to defend national, popular demands."

However, neither the meetings, nor the indefinite protest action that began in March in the center of Baghdad did not help. Al-Abadi presented to the deputies a list of the new "technocratic" government, but with the exception of a few minor figures, the parliament did not support the proposal of the prime minister. This led to an escalation of tension. 30 April thousands of protesters broke into the so-called Green Zone - the most protected administrative district of the capital, which became a symbol of the abyss that separates people and power. Most of the deputies, fearing reprisals, fled, and Muktad al-Sadr, speaking to supporters, announced the termination of negotiations with the authorities. “Either these corrupt politicians will leave themselves, or the government will fall under the onslaught of the people ... I am waiting for the people's revolution,” he said.

Apparently, this is the only way to save Iraq from disintegration and chaos. In Baghdad, almost every day there are terrorist attacks that take hundreds of lives. The power entangled in clan networks and dependent on the West is not able to cope with this task.

But the collapse of the country is caused not only by internal causes - it is actively provoked from the outside. A referendum on the independence of Iraqi Kurdistan (with its capital in Erbil) may be held in the coming months. 5 May held a meeting of the governing board of the Democratic Party - the leading political force in the autonomy. It was decided to "intensify efforts to prepare a referendum." On the same days, Masrour Barzani gave an interview to the Washington Post. And since this person is not just the head of the Kurdistan Security Council, but also the son of President Massoud Barzani, the statements he made can be called programmatic. After repeating the thesis about the region’s readiness to hold a referendum, Masrour declared that “an experiment called Iraq did not work,” and all attempts to preserve its unity would end in failure.

Making such statements, the leadership of Iraqi Kurdistan only broadcasts the position of external forces. Autonomy depends entirely on Turkey, through which it exports oil. In Kurdistan, there are Turkish soldiers. According to official statements, they train fighters of the local militia, but their mission is not limited to educational tasks, because, for example, Turkish armored vehicles and artillery are deployed at the base of Bashik. In addition, the regional authorities allow Turkish security officials to carry out operations against the militants of the Kurdistan Workers' Party, which has strongholds in the autonomy, and even transfer intelligence to Ankara for strikes.

Another partner (or rather, patron) of Erbil is the United States, which also stationed quite large military forces in the region. Finally, Iraqi Kurdistan has allied relations with Saudi Arabia. Following the visit to Riyadh Masud Barzani, the kingdom authorities decided to give autonomy a record financial assistance - 8 billion dollars.

These three countries see Iraqi Kurdistan as a springboard for achieving their own interests, primarily to counteract the influence of Iran. It can hardly be considered a coincidence that simultaneously with the activization of the movement for the independence of the region, the resumption of armed struggle was declared by separatist groups in Iran. The leader of the Democratic Party of Iranian Kurdistan, Mustafa Hijri, repeating propaganda clichés of the Saudi authorities, called Tehran "the main threat to the region" and called for the destruction of the ruling regime of the Islamic Republic. In early May, Kurdish militants attacked the Iranian military in the city of Sardesht, killing 6 and wounding more than two dozen of them. Tehran pulled off additional forces to the border with Iraqi Kurdistan, since it was in the autonomy that separatist troops were based.

In addition to Kurdistan, the United States and its allies are seeking the proclamation of independence of yet another Iraqi region, for the time being conventionally referred to as Sunnistan. This state should unite the areas inhabited by Sunni Arabs in the west of the country. In February, during a visit to the US by the speaker of the Iraqi parliament (according to quotas, this post is occupied by Sunni Salim al-Jaburi), an agreement was signed on opening in Washington an official diplomatic representation of the Sunnis of Iraq. He was headed by the former governor of the province of Ninawa, Atil al-Nujaifi, who immediately declared that the main goal of the office was “to tell the whole world about the atrocities of Shiites”.

By provoking inter-religious hostility and crushing Iraq, Washington, Ankara and Riyadh can not understand that the defeat of the "Islamic state" is postponed indefinitely. But that is their goal! Turning Iraq into a conglomerate of weak and dependent states, at the same time holding Cerberus of Islamic extremism at the ready, is, in their opinion, the best way to control the region and fight against Iran. In the case of the emergence of quasi-sovereign Kurdistan and Sunnistan, Tehran will find it more difficult to support the regime of Bashar al-Assad and its supporters in Lebanon, and this will change the whole balance of forces in the Middle East. Therefore, on the streets and squares of Baghdad, filled with outraged people, today the fate of more than one Iraq is being decided.

Ctrl Enter
Noticed oshЫbku Highlight text and press. Ctrl + Enter
We are
Inequality in education. Only affordable education will make Russia a strong state.History of the Navy of Iraq. Part 3. From the invasion of Kuwait to Freedom of Iraq (1990-2003)
Military Reviewin Yandex News
Military Reviewin Google News
20 comments
Information
Dear reader, to leave comments on the publication, you must sign in.