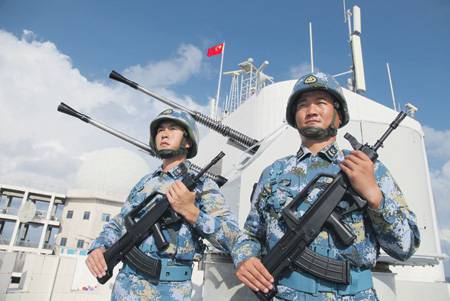 The US Department of Defense published a new report on the military preparation of the PRC in 2016. The open part of this research became available to the American public 13 this May. In accordance with the requirement of the congress, the Pentagon has published annually the results of a study of China’s military potential since 2000. Beijing repeatedly and in a rather harsh manner expressed its disagreement with such actions by the US Department of Defense specialists. A similar opinion was expressed by the PRC leadership regarding the last report, on the cover page of which a note was made that it cost the Pentagon 95 thousand dollars.

In the six chapters of his rather lengthy document, the volume of which together with the application is 144 pages, the experts of the American military considered in great detail all areas of military construction of the PRC this year and the prospects for the development of the People’s Liberation Army of China (PLA) in the next 20 years.

As noted in the document, the comprehensive modernization of the PLA entered a new phase last year, when Beijing embarked on a major reform of the organizational structure of its Armed Forces. The essence of this transformation was to further strengthen the control of the Chinese Communist Party (CCP) over the Armed Forces, to increase the PLA’s combat capabilities to conduct joint operations for the armed forces and service arms, and also to increase the readiness of the armed forces to move out of China for participation in a short-term operation. high degree of intensity in the elimination of armed conflicts in regions located at a considerable distance from the PRC.

Leaders of the People's Republic of China, as American military experts emphasize, are actively looking for ways to strengthen their capabilities in the military, diplomatic and economic fields in order to establish their regional advantage, as well as to strengthen and expand their international influence. The Beijing leadership believes that the modernization of the PLA is one of the most important factors in achieving the status of a great power, which the PRC Chairman Xi Jinping calls the “Chinese dream” of national revival. Chinese leaders argue that a powerful army is an essential tool for protecting national interests and deterring various countries from harming China and ensuring that its sovereign requirements are respected.

During the past year, the PRC leadership continued to conduct activities to assert its sovereign claims in the East China and South China Seas. In the East China Sea, shipping zones in the area of ​​the Senkaku Islands (Diaoyu), claimed by Japan, are controlled by Chinese patrol vessels and airplanes. And in the South China Sea, China considers the Nansha Islands (Spartley), which are claimed by several states. Although these islands do not provide Beijing with any strategic advantage or additional rights in this region, its leadership can use this territory as a military base, a civilian settlement and significantly strengthen its presence in the waters of this sea.

China demonstrates its intention to tolerate growing tensions with other countries and to protect its territorial interests, especially in the indicated seas. However, Beijing is trying to avoid direct and tough conflict with Washington. The PRC leaders understand that the growing instability of the situation and the direct military confrontation between the two countries can nullify the pace of economic development in China, which is the key to the dominant position of the CPC. Therefore, in the near future, Beijing will take all measures to softly protect its territorial and maritime interests and prevent the possibility of armed conflicts.

In the long term, PRC leaders will pay increasing attention to the development of military capabilities, which, in their opinion, are necessary in order to keep their opponents, including the United States, from using force or defeating them in the event of a conflict. Modernization of the PLA is aimed at developing such technologies that in the future should significantly reduce the military superiority of the American Armed Forces.

Beijing officially announced that in the 2006 – 2015 years, taking into account inflation, the PLA budget has increased by an average of 9,8% annually. The PRC leadership also noted that in the foreseeable future, despite the slowdown in economic growth, military spending will constantly increase.

China's leaders continue to prepare for a possible conflict in the Taiwan Strait. It is for this reason that the new contingent of the Armed Forces of China, located in the East and South China Sea and on the Korean Peninsula, is of particular importance for Beijing. Moreover, Pentagon analysts point out that, due to the growing international influence of China and the expansion of its interests, the PLA development program is becoming more and more focused on increasing defense spending and developing military infrastructure so that a military operation can be conducted outside the country. The PRC expands its military presence in various regions of the world, provides protection to shipping, participates in the fight against pirates and in peacekeeping actions, and also provides humanitarian assistance to various countries in the event of a natural disaster. In November last year, China announced the signing of an 10-year contract for the construction of a military base in Djibouti (Africa), which will become Beijing’s first military base abroad. According to some experts, China already has a plan to build approximately 20 naval bases along the coast of the Indian Ocean. This document is called "Pearl Thread".

China continues to increase its military capabilities. The country is developing intensive development of medium-range and short-range ballistic missiles with conventional warheads and long-range cruise missiles to destroy ground and sea targets. In addition, space weapons are being created, as well as EW and cyber warfare tools.

Experts point out that, despite some increase in China’s military potential over the past two decades, it’s still not entirely clear how Chinese aircraft that have not participated in large-scale military operations for more than 30 years will be ready for effective action. in the upcoming wars.

The US DoD views relations with China as part of the White House's strategy in the Asia-Pacific region. Washington argues that its policy of engagement with the PRC is based on the fact that both sides should closely cooperate in areas where their interests coincide and constructively resolve the contradictions that arise.

The report of the American War Department states that, while strengthening military cooperation with Beijing, Washington continues to monitor the PLA’s strategic installations, its military doctrine and directions of military construction. At the same time, he constantly calls on the PRC for the transparency of its military preparations and intends to constantly adapt its armed forces to repel a possible threat, maintain world order, and also protect its allies and friends from external aggression, which may also come from Beijing.

The official representative of the Ministry of Defense of China, Yang Yujun, as reported by the Xinhua news agency, said that the country's defense department was extremely dissatisfied with the Pentagon’s next report on the development of the PRC in the military and security sector for 2016. He said that the conclusion of the analysts of the Ministry of Defense caused “serious dissatisfaction” and “strong protest” in the PRC, and that their conclusion “seriously undermines mutual trust”.

According to the representative, the report “continues to inflate the hackneyed topics” about the military threat from the PRC, unreasonably asserts the lack of transparency in the construction of the Chinese Armed Forces, “deliberately distorts” Beijing’s defense policy and deliberately “incorrectly” interprets and assesses the PRC events held in the East China and the South China Seas, stating that China is planning to expand its military infrastructure this year, including the establishment of a communications and surveillance system, on artificial islands in the South China Sea.

“China is pursuing a national defense policy, which is essentially defensive,” said Yujun. He also added that building up the country's military potential and PLA reform is aimed at preserving China’s national sovereignty, security and territorial integrity, as well as its peaceful development.

A representative of the Ministry of Defense of the People's Republic of China accused the American side of “unjustified” assessment of the direction of reforming the Chinese Armed Forces, military operations abroad, developing weapons and military equipment, defense spending, space military programs, using the Internet for intelligence purposes, relations with Taiwan and many other issues of military construction.

"The Chinese side expresses sharp discontent and a strong objection to the American report," he said. Yang Yujun stressed that “the so-called report on China’s military and security development published by the US side year after year seriously damages bilateral mutual trust and runs counter to the development trend of interstate and military ties between China and the United States.”

“We demand that the American side stop making statements and implement actions that do not benefit Chinese-American relations and mutual trust in the military sphere, and take real steps to promote the healthy and stable development of interstate and military ties between China and the United States,” the military official said.

Beijing has repeatedly expressed its sharp outrage at the Pentagon reports on the Chinese Armed Forces. China's leadership believes that, when issuing such reports annually, the White House ignores the real facts and subjects the Chinese government to unfounded accusations, which conducts the normal construction of its armed forces in order to ensure the country's national security.

Recently, official Beijing demanded that the United States immediately stop reconnaissance flights of American military aircraft over the coastal regions of China, which pose a threat to the country's national security. Such a statement 19 May this year. made the official representative of the Ministry of Foreign Affairs of the PRC Hong Lei.

“It should be noted that American military aircraft are constantly making close flights over the coastal regions of China, carrying out intelligence activities, representing a huge threat to the security of China in the air and at sea,” declared Hong Lei.

Earlier, the Pentagon said that on May 17, two Chinese fighters had intercepted an American reconnaissance aircraft over the international waters of the South China Sea. The leadership of the US DOD has described this incident as quite dangerous for both parties. Recently, the military activity of the USA and China in the South China Sea continues to expand. This leads to an increased risk of confrontation between the two countries in this region.

Today, Beijing has serious differences with Brunei, Malaysia, Vietnam, the Philippines and Taiwan over a disputed territory in the South China Sea. China considers the Xisha and Nansha archipelagoes for which these countries claim to be their own territory. Chinese leaders claim that the PRC acts on these islands and adjacent waters in full compliance with international legal norms, since they are part of China and it has sovereign rights in this region.