Petro Poroshenko announced the beginning of the restructuring in Ukraine

23 May 2016
98
Last week, the capital of the state, whose citizens local officials insistently urge to prepare for the land, again felt the smell of burning. Then representatives of either the battalion, or the regiment, or the division, or the whole army of alcoholics, hooligans and parasites, called “Azov”, came to their next march. In the middle of the working day, several thousand people under the banner, torches and smoke bombs marched through the center of Kiev, reaching the building of the Verkhovna Rada of Ukraine, in which another question was decided about the next renaming of something into something within the framework of, of course, “ decommunization.


The main slogan of “Azov” parasites, for whom the working day is to leave the crowd with firecrackers and shout loudly on a broken line, looked like this: “The requirement of a nation is no surrender”. These are radicals that, they say, it is necessary to be tougher with the Donbas and to ban Donetsk and Lugansk to hold local elections. There were also calls to Petro Poroshenko - calls for the “supreme” to intensify the phase of military action and still take the Donbass, and they, the parasites from Azov, are ready to help ...

Don Pedro, who with shaking knees, would be glad to kiss the radicals, but whom the “partners” hold for their causal place, commenting on the procession of “Azov”, admitted that the rally participants were obviously tense. Poroshenko said that marching is, of course, good, but to burn torches and flares is bad, and in general, there is no military way to return Donbas to Ukraine. Yes, yes, that's exactly what he said. Here is a quote from the Ukrainian resource. UNIAN:
I can not say a few words about today's march in Kiev. The first to appear were these pictures on Russian television — tires, firecrackers, reports of wounded policemen, and wounded citizens. These pictures spread and intentionally played along with pictures that today they are allegedly trying to destabilize the situation in the state. I emphasize once again that this is an absolutely clear position - there is no military way to return Donbas.

That is, he spoke as if he were addressing the Russian media, but in the end he made a verbal somersault and redirected what was said to those who advocate military actions in the southeast.

At the same time, Poroshenko, trying to comply with the “status of the Minsk agreements,” added:
Disrupting peace processes, hiding behind something, is absolutely irresponsible towards the state, and this will only lead to the fact that part of the Donetsk and Lugansk regions as a result of these processes will remain under occupation. I cannot allow this, as the commander in chief, as president. This is not my script.

Poroshenko did not blame those who went on the march in the center of Kiev to “work for the Kremlin”, because he understood that citizens who were not engaged in useful work could also knock at his door with machine butts of machine guns and then go hide their golden loaves ... But I tried to make it clear that in Ukraine there are forces trying to implement the military scenario in the Donbass, and that he, Petro Poroshenko, has nothing to do with these forces. They say that I am for peace in the whole world, but, you know, they substitute me in the most brazen manner, and they also show a picture on Russian television.

After such a statement by the Ukrainian president, representatives of the "ukroyastreb company" began to knock on the keyboard, expressing their opinion in social networks and comments on publications in the Ukrainian media. Like, Don Pedro again yulit, which means he is going to hand over the Donbass to the “aggressor”. And - it started ... They say, and you, they say, Pyotr Alekseevich, we will soon find gold loaves - you just wait.

Realizing that he played with the radicals, which he himself practiced in his time, we should nullify, but at the same time insure our soft spot against their encroachments, the President of Ukraine decided to attempt to gain support from the "friends" from the West. As soon as the number of comments from supporters of an armed solution to the issue of Donbass in the style of “We will get you out of the ground for such words!”, Poroshenko made a statement in which he mentioned Ukraine and NATO becoming closer .

According to the President of Ukraine, who spoke at a meeting of the National Security Council, he begins to restructure the defense sector for the country's subsequent entry into the North Atlantic Alliance. And it sounded exactly the word "restructuring":
The specified project is the actual beginning of the real restructuring defense and security sector for entry into NATO. This does not mean that the decision to join is being made. Of course, we remain in the sphere of our international commitments, but this is the rubicon that Ukrainian Armed Forces of Ukraine and the defense and security sector are moving for the final translation to NATO standards.

Taking into account the fact that tens of millions of citizens live in Ukraine, who are familiar with the results of at least one restructuring, not only the radicals, but also peace-loving Ukrainians, have become tense. Here, say Pyotr Alekseevich also “the main thing is to begin, and then expand and entangle” - the associative line would have lined up completely. But, probably, he will say more ... 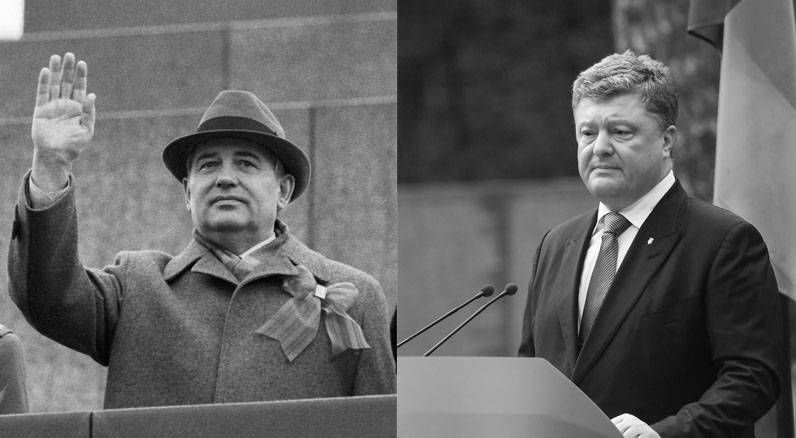 In general, if perestroika is coming up in Ukraine (for the time being it seems to be exclusively military), then does this mean that it is time to start a real countdown? ..

By the way, has the chief of the restructuring in this world stayed out of work ... After all, Michal Sergeich must have had “perestroika” sketches so that, without delaying the process, he would come to the same result that he had at one time and (result) in the same Ukraine is considered "deliverance from the Soviet occupation." In this situation, Ukraine can really rebuild to “fully comply with NATO standards” and get rid of “occupation” completely ... To do this, at least three leaders should be drawn on Ukraine themselves, who will gather in the Ukrainian analogue of Belovezhskaya Pushcha, sign a document on their knees and ring back to the White House with the information that Ukraine as a state no longer exists, and that democracy in the expanses from the Carpathians to Slobozhanshchina finally won.

Ctrl Enter
Noticed oshЫbku Highlight text and press. Ctrl + Enter
We are
America teaches Ukrainian neo-Nazis? ("The Daily Beast", USA)Situational analysis of the death of the MH17 flight (Malaysian Boeing 777), made on the basis of engineering analysis from 15.08.2014
Military Reviewin Yandex News
Military Reviewin Google News
98 comments
Information
Dear reader, to leave comments on the publication, you must sign in.