Shipbuilders do not swim in 2017 year 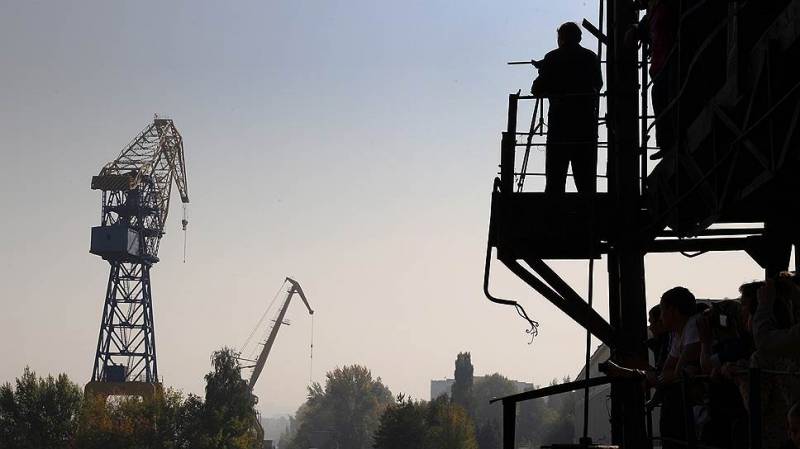 The situation in civil shipbuilding continues to be complicated: according to the Russian Maritime Register of Shipping, the number of orders for 2017 is four times lower than this year. Experts predict that, despite the decline in production, the cost of civilian ships built in Russian shipyards will continue to grow next year. But problems in the industry can start in 2018, against the backdrop of a noticeable reduction in orders.

According to the Russian Maritime Register of Shipping (RMRS), in 2016, 90 civil vessels will be delivered to customers by Russian shipbuilders, but the volume of orders for 2017 at the moment does not exceed 20 units. This was announced yesterday at the Marine Industry of Russia forum by the head of the Planning and Marketing Department of RMRS Georgy Bedrik. He noted that there is another six months to conclude new contracts, but added: "Now we live only in hope." He explained to Kommersant that in the near future there should be a revival in the market of fishing vessels, the port fleet, as well as ships of the "river-sea" class. In particular, according to Mr. Bedrik, now the average age of the fishing fleet is 28 years. "We have 1206 units in the class, of which more than 30% (that is, 400 vessels) older than 30 years, this creates a good prospect for updating," he says. The situation is similar with the port fleet: according to RMRS, in the class more than 50% of vessels are older than 30 years. "These two segments are now especially in demand and can bring the industry the largest number of orders," said George Bedrik.

According to the agency "Infoline-Analytics", in 2016, approximately the same number of vessels as in 2015 will be commissioned - at least 80. But their value will increase compared to 2015 a year more than 1,5 times, to 30 billion rubles. The agency notes that the reason for this will be the transfer of platforms to the LUKOIL field to them. Filanovsky shipyard "Red Barricades" and the Astrakhan Shipbuilding Production Association (AFS). As a result, the share of military orders in the industry in monetary terms will decrease to about 75%. Last year, for the first time in the last six years, the number of military ships built in Russia exceeded the number of orders in civil shipbuilding (see Kommersant’s report on March March 1). At the same time, in military terms, military shipbuilding has already been ahead of civilian since 2013. According to the Infoline Shipbuilding Russia Top rating, the cost of civilian ships built in Russian shipyards for 2010-2015 amounted to 22,8 billion rubles, for the same period the cost of military ships reached 102,6 billion rubles.

According to Infoline-Analytics, the most significant 2016 orders of the year will be the Ice15 multi-purpose ice class supply vessel Sakhalin-2, which the Vyborg Shipyard is building for Sovcomflot, an Aker ARC 121 ice-class rescue vessel (on the XNX) MW), which is being built for Sovcomflot by the United Shipbuilding Corporation (USC), two tankers of the RST13 project of the Volga-Don Max class for the BF Tanker and three dredgers for Rosmorport at the Krasnoe Sormovo plant. As for prospects, in 27, the number of civilian ships transferred to customers will be reduced to 2017 units, but the cost of civilian orders will be at least 40 billion rubles — twice the level of this year. The most significant projects are the floating NPP Akademik Lomonosov, a chemical tanker based on the RST60 project, which is building the Lotos plant for Volgotrans, two diesel-electric icebreakers of the Icebreaker25 project of the Vyborg plant, which is being built by the Vyborg plant for Gazprom oil, and nuclear icebreaker LC-130, which is building the Baltic plant for the federal state unitary enterprise Atomflot.

In Infoline-Analytics, it is predicted that the decline in civilian construction will start from 2018 and will be due to the lag in exploration of the shelf while maintaining low competitiveness of Russian shipbuilders in the civilian shipbuilding segment. The latter is associated with low quality standard design solutions, inferior to projects of European and Asian shipyards, as well as the lack of seriality, which does not allow even with the devaluation of the ruble to form an attractive offer.

Ctrl Enter
Noticed oshЫbku Highlight text and press. Ctrl + Enter
We are
What you didn't want to know about EnglandList of destroyed the largest and most high-tech enterprises
Military Reviewin Yandex News
Military Reviewin Google News
21 comment
Information
Dear reader, to leave comments on the publication, you must sign in.