19 May 2016
88
Victoria Nuland held a meeting with the Assistant to the President of Russia Vladislav Surkov, after which she went to her favorite Russian establishment - “Varenichnaya No. XXUMX”. 1 May "Twitter" has boiled over, news shook the world community: Nuland again eats Russian food! On the eve Nuland discussed with Mr. Surkov and Mr. Ryabkov the settlement of the Ukrainian conflict. 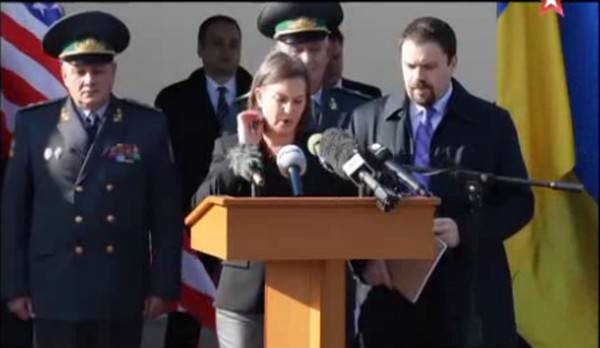 As the press reports, Mrs Nuland was in the dumpling for about twenty minutes. Later, a spokesman for the American Embassy, ​​William Stevens, who shared a modest meal in a restaurant with a State Department representative and Ambassador Tefft, told Twitter:

“While visiting Moscow, Nuland cannot help but taste dumplings at his favorite restaurant.”

In the same dumpling American diplomats have been before. Snuff Nuland and her companions, usually accompanied by security.

On the eve of the dinner with dumplings, May 17, Mrs. Nuland discussed the settlement of the conflict in Ukraine with Mr. Surkov, Assistant to the President of Russia, as well as Deputy Minister of Foreign Affairs of the Russian Federation Sergey Ryabkov.

The details of the talks became known in the afternoon of May 18.

At the last meeting, the parties raised issues related to the implementation of the Minsk agreements and the state of bilateral relations between Russia and the United States.

Nuland said later that the negotiations were held in a constructive manner.

“I'm leaving home after a constructive round of talks. This is very important: keep the conversation going, try to solve problems together, ”the channel quotes the diplomat "RT".

She noted the "deep immersion" of the parties in the topic of the Ukrainian conflict.

“On the eve we deeply plunged into all aspects of the Minsk talks, how we can strengthen security, improve access for the OSCE, move forward in political commitments, including preparations for elections in the Donbas,” Nuland said. RIA News".

State Department spokeswoman said that Washington does not recognize the elections in the Donbas, if they will be held outside the Minsk agreements.

As for the meeting with Sergey Ryabkov, then diplomats discussed issues of bilateral relations between the Russian Federation and the United States.

Later, the press secretary of the Russian president, Dmitry Peskov, said that Nuland’s visit was carried out within the framework of the “working mechanism for the exchange of information on the situation in Ukraine.”

What do Russian experts think about the new visit of Nuland?

The expert believes that the actions of the American side should be viewed in the context of the election race in the United States: “At the moment, everything must be viewed from the point of view of elections in the United States. Trump very quickly and very powerfully picks up the pace, now he has caught up in ratings with Hillary Clinton. His main accusation is against Clinton and the policy that began with Reagan: that American expansion not only leads to the conquest of other markets, but also causes enormous damage to the United States itself. He needs to show that Obama’s destabilizing policy, part of which has been Clinton for many years, has caused great damage to the United States. And now his main argument will be - look at what you have done: you have destabilized the entire Middle East, Ukraine. Today’s administration, in order for Clinton to win, it is necessary that America act not as an aggressive but, on the contrary, as a compromising player in this matter. After all, this is Trump’s very strong trump card. ”

The expert concludes: it is important for the United States not to confront Russia, but to negotiate with it. At least “the appearance of stabilization is necessary so that there is no sensation of obvious confrontation with Russia”.

The conclusion is absolutely obvious. We add that the conflict in the Donbas before the elections is unprofitable for the White House, since relations with Russia are one of the first themes in the speeches of both Hillary Clinton and her competitors, including the expressive Trump, who promised to negotiate with all American geopolitical opponents, including Putin and even Kim Jong Un.

Such pre-election statements do not leave H. Clinton, now a popular figure in the USA again, nothing more than to follow a similar peace-loving line, and even surpass opponents. The aggravations of the situation and the launch of a new arms race are not wanted today by many Americans, and even among the military a serious protest is ripening against the alleged increase in the number of US ground forces in Europe and new large budget allocations for weapons.

Apparently, Russian dumplings have a wonderful ability to set up Americans in a peaceful way.

Observed and commented on Oleg Chuvakin
- especially for topwar.ru
Ctrl Enter
Noticed oshЫbku Highlight text and press. Ctrl + Enter
We are
ARMY-2016. Everything for the fleet, everything for lunchResults of the week. “Have you had any construction accidents?” Did not have? Will be! "
Military Reviewin Yandex News
Military Reviewin Google News
88 comments
Information
Dear reader, to leave comments on the publication, you must sign in.