The first steps of the Vietnamese communists. To the birthday of Ho Chi Minh

19 May 2016
9
After the collapse of the Soviet Union and the collapse of the socialist camp in Eastern Europe, only a few states remained in the world, officially proclaiming their socialist orientation. Almost all of them are located in East and Southeast Asia. Among them are North Korea (DPRK), the most “closed” to the outside world, and dynamically developing China and Vietnam. The coming of communists to power in Vietnam is inextricably linked with the life and activities of man, which is associated throughout the world with the Vietnamese revolutionary movement and the war of the Vietnamese people against the American aggressors. It is about Ho Chi Minh - the world famous "Uncle Ho." 19 May celebrates Ho Chi Minh’s birthday in Vietnam - it was born in 1890 year, in the village of Kimlien, Namdan County, Nghean Province, Central Vietnam. By the way, in fact, his name was completely different names. At birth, the future leader of the Vietnamese communists received the name Nguyen Xinh Kung, and when he reached school age, the second, “bookish” name Nguyen Tat Thanh. 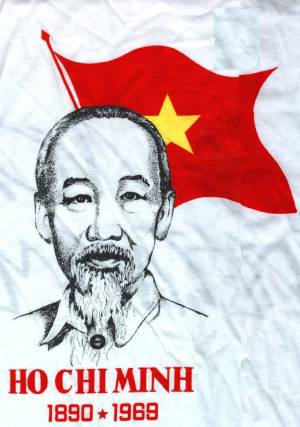 As you know, by the end of the 19th century, the conquest of Vietnam by the French colonialists was finally completed, and the national liberation movement in the country was suppressed. But the approval of the power of the colonialists at the same time contributed to the beginning of the penetration into Vietnam of democratic and revolutionary ideas of European thinkers. Educated Vietnamese youth, who got acquainted with them, increasingly thought about the need to modernize the country. Moreover, by the beginning of the twentieth century, the successful experience of turning an Asian country into a prosperous and powerful state was before our eyes. This is about Japan after the Meiji Revolution. Initially, national liberation ideas based on combining ideas about the need to modernize Vietnamese society along the lines of European countries with ideas of Vietnamese nationalism spread in Vietnam.

Representatives emerged in the early twentieth century. nationalist circles were criticized by the feudal monarchy, which discredited itself, including cooperation with the French colonial regime, but at the same time recognized the need to preserve national traditions. Many of the Vietnamese public figures, focusing on China and Japan, preferred to follow the Confucian ideal of social organization. Thus, Phan Chu Chin (1872 — 1926), who led the “social reform movement”, considered the teachings of Confucius the basis for the socio-political organization of Vietnam, while he considered a constitutional monarchy like Japan to be a transitional stage towards a parliamentary republic. More radical positions were Fan Boy Chau (1867 — 1940), who called for armed struggle against the colonialists. As for the revolutionary socialist ideas, they initially spread among the Vietnamese who worked and studied in France.

Great influence on the Vietnamese revolutionary movement had the First World War and, especially, the October Revolution 1917 of the year in Russia. At this time, the French Communist Party led an active work among the workers and students arriving from the colonies, under the influence of which some Vietnamese who lived in France fell. In 1920, the PCF was joined by Ho Chi Minh, who lived in France under the pseudonym Nguyen Ai Quoc - “Nguyen-Patriot”. In 1922, a group of revolutionaries from Vietnam, Algeria, Tunisia, Morocco and Madagascar created the Union of the Peoples of the French Colonies in Paris. The Union has its own printed edition - the newspaper “Paria”, the editor-in-chief of which was the young Vietnamese Ho Chi Minh (in the photo Ho Chi Minh speaks at the FKP congress). 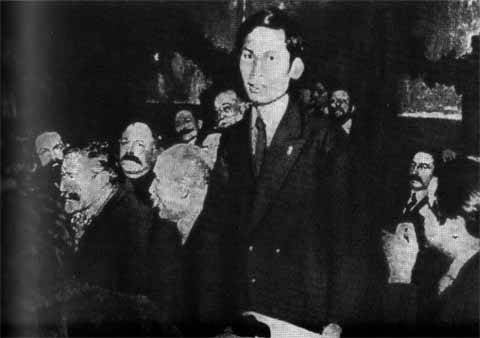 After the October Revolution, the first Vietnamese revolutionaries come to Soviet Russia, where they have the opportunity to evaluate the transformations taking place in the life of the country with their own eyes. One of the first Vietnamese revolutionaries caught up in Russia was Ton Duc Thang. As part of the Tonkin rifle unit that was part of the French colonial troops, he was transferred to Odessa, where French invaders landed in 1919. However, in Odessa, Ton Duc Thang took part in the uprising of French sailors. After demobilization, he returned to Saigon and became one of the founders of the local trade union. At 1923, at the invitation of the Comintern, Ho Chi Minh came to Moscow. Here he worked in the Executive Committee of the Communist International, studied at the Communist University of Working People of the East.

In the middle of 1920's. The center of the Vietnamese revolutionary movement was formed in China. In 1924, in Guangzhou, a group of like-minded people was created - “There There Sa”, which included several Vietnamese immigrants. However, they adhered to the idea of ​​a revolutionary individual terror, for which they were criticized by Ho Chi Minh, who also moved to Guangzhou in the 1925 year. In June, the first Vietnamese Communist organization, the Vietnamese Revolutionary Youth Partnership (TVRM), was established in Guangzhou in 1925. The weekly magazine Thanh Nien (Youth) began to be published, propagating communist ideas in Vietnamese.
As a result of the activities of propagandists, groups of the Association of Vietnamese Revolutionary Youth appeared in all three parts of Vietnam - in Tonkin, Annam and Cochinhin. First of all, they sought to enlist the support of a small working class at that time, agitating factory and agricultural workers. In 1928-1929 The partnership has begun work on preparing for the creation of the Communist Party. In Northern Annam and Cochin China, the Revolutionary Party of New Vietnam acted with 1926, working closely with the Fellowship, but in more moderate positions.

End of 1920's was marked by a number of working speeches and peasant uprisings that took place in various provinces of Vietnam. So, only in 1929 in Vietnam did 25 workers strike occur. Workers of the railway depot in Vinh, the Avia factory in Hanoi, the textile factory in Nam Dinh, the rickshaw of Hanoi, struck. In the same year, the peasants revolted in Kongtume. These events convinced the Communists who were part of the Partnership, the need to create a Communist Party. From 1 to 9 in May 1929 in Hong Kong (Hong Kong), the first congress of the Vietnamese Revolutionary Youth Partnership was held, which was attended by 17 people - 5 representatives from TVRM Central Committee, 4 representatives from Tonkin and Annama, 3 representatives from Cochin China and 1 representatives from the Partnership in Xinqm and Annama, 1 representatives from Cochin China and 1929 representatives from the Partnership in Syria . The representative of the Tonkin organization Quoc Anh (Chan Van Kung) spoke in favor of the creation of a communist party, but he was criticized by the secretary of the Fellowship Lam Duc Thu. After that, the Tonkin delegation left the venue of the congress, and in late May, the Tonkin organization gathered for its own conference, at which it was decided to immediately intensify work on the creation of the Vietnamese Communist Party and the deployment of the revolutionary struggle in Vietnam. 17 June 1929. The Tonkin organization issued a statement in which it stressed that the Vietnamese Revolutionary Youth Partnership does not correspond to the time and that the working class of Vietnam needs its own party, focused on the communist ideology. After a little more than two weeks, 20 June XNUMX, a conference of representatives of the communist organizations of Tonkin was held in Hanoi, which brought together XNUMX delegates. It was officially established Indochinese Communist Party (ICCP). The banner of the party was the red flag with a hammer and sickle. The conference decided to send delegates to Annam and Kokhinkhinna - to organize communist party branches there. 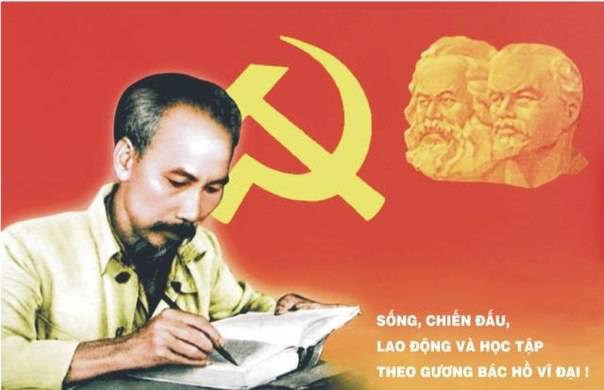 In the meantime, a group of members of the Vietnamese Revolutionary Youth Partnership in Cochin China decided to create another communist organization. Thus, the Annam Communist Party (AKP) was created, the program of which almost completely repeated the program of the Tonkin PCL, but included criticism of the latter. Under the AKP, the publication of the Bolshevik magazine and the newspaper Do (Krasny) began. Soon, the majority of the Cochinchina workers' organizations came under the control of the Annam Communist Party.

The existence of three communist parties in Vietnam at the same time was a serious obstacle to the development of the national liberation struggle. The need to form a unified Communist Party of Vietnam was concerned about the leadership of the Communist International. On the instructions of the Comintern, the work of consolidating the Vietnamese Communists was led by Ho Chi Minh, at that time better known as Nguyen Ai Quoc. In December 1929, he left Singapore for Hong Kong (Hong Kong), where he initiated a meeting of representatives of the Indochinese Communist Party and the Annam Communist Party. At this meeting, representatives of the parties were acquainted with the letter of the Comintern, which demanded the creation of an interim committee to consolidate the Vietnamese communist movement. 3 February A conference of Vietnamese communists was convened in Xiangang, in which they took part: from the Comintern - Ho Chi Minh, from the SECC - Nguyen Duc Kan and Chin Dinh Qui, from the AKP - Tiau Van Liem and Nguyen Thieu. There were no representatives of ICKS at the conference. The conference decided to start the creation of a unified Communist Party of Vietnam, to develop a program and the charter of the party, elect a provisional Central Committee consisting of 1930 members. 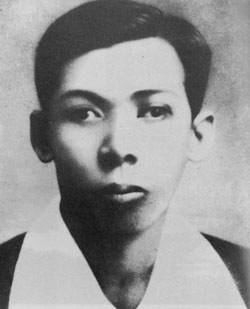 In October, 1930 was held the first plenum of the Central Committee, at which the party was renamed the Communist Party of Indochina. In April, the 1931 of the Communist Party of Indochina was admitted to the Comintern. On the territory of French Indochina, the activity of the Communists took place in semi-underground conditions, since the colonial administration was very much afraid of the spread of revolutionary ideas among the people of Vietnam and the intensification of the national liberation movement. Almost immediately after the creation of the Communist Party of Indochina, its first secretary general Chang Fu (1904-1931), a native of Fuyen province, joined the revolutionary movement while living in China and in 1927-1929, was arrested. studied in Moscow at the Communist University of Workers of the East (in the photo). In the same 1931, Mr. Chang Phu died in prison, he was only 27 years old. Nevertheless, the Vietnamese communists managed to organize a series of strikes and speeches of peasants in the 1930-ies, and with the beginning of the Second World War go to the guerrilla struggle against the French colonialists and Japanese invaders.

From the very beginning of its existence, the Vietnamese communist movement was closely associated with the USSR. Ho Chi Minh lived in the Soviet Union for some time, the first general secretary of the Communist Party of Indochina, Chan Fu, his successor in this post, Le Hong Fong (102-1942), who also died in prison, already studied in the Communist University of Working People of the East, KPI's third secretary Ha Huy Thap (1906-1941), executed by the colonial administration in 1941. Traditions of interaction of the Vietnamese communists with the Soviet Union, subsequently, after the collapse of the latter, transformed simply into friendly relations between the Socialist Republic Vietnam and the Russian Federation were also founded by Ho Chi Minh - one of the first Vietnamese revolutionaries who lived in Soviet Russia. However, Ho Chi Minh himself, remaining the most authoritative Vietnamese communist, returned to Vietnam only in 1941 - to lead the partisan movement, and until that time the Communist Party of Indochina was headed by other revolutionary leaders. Almost all of the Vietnamese revolutionaries of the “first wave” died in dungeons or were executed in the 1930's — 1940's. by the french colonial authorities.