20 May 2016
136
71-th Victory Day has passed. There was a wonderful Parade, a wonderful speech was made by the Commander-in-Chief, we passed in the ranks of the Immortal regiment, carrying portraits of our victorious grandfathers. And they sang and wept, remembering the fallen ...


But again, in my opinion, it was not said about one of the main consequences of that war: not a word was said about the victims of the people, the share of soldiers only whose losses in the terrible 1942 amounted to 77,1% of all losses (in 1941, 65%), despite the fact that its share in the population of the USSR did not exceed 50%. About the people, to the lot of which fell the brunt of the terrible defensive battles of 1941-1943, and, accordingly, the salvation of the Fatherland. About the people who suffered the greatest and terrible sacrifices in stories mankind - no great sacrifices have ever been made.

The majority of the victims were not soldiers capable of protecting themselves, but ordinary children, old men and women. The euro-Nazis of that time put out their hatred and fear for the unheard of casualties on the front. Children and women made up the bulk of those from whom they "cleaned" the living space in the East.

Here they are, defenseless and most vulnerable, and I would like to remind you today, after Victory Day. 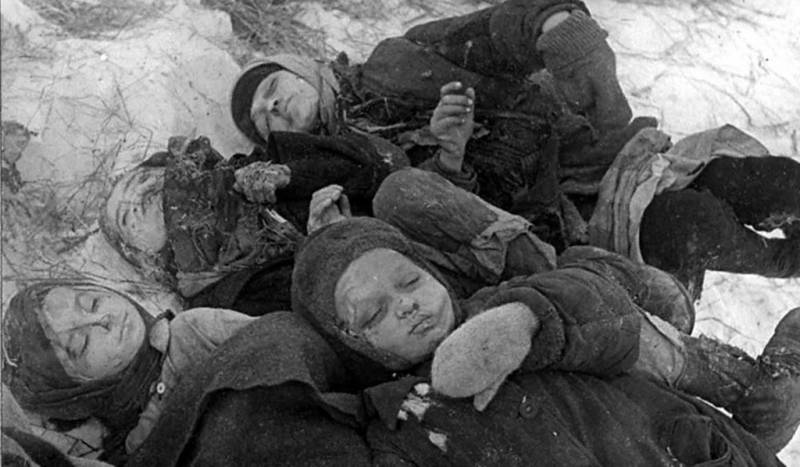 By the way, can anyone sneak off the number of peaceful Russian people who died in World War II? Hardly…

To find out at least in general terms, it is enough to look at the census data on the Russian regions subjected to occupation, before and after the war (in principle, everything is known and lies on the surface, but it is never mentioned tolerantly).

So, Russian regions after the war :

- Smolensk region - out of 2 million population, 0,9 million remained, the population decreased by 55%, that is, 1,1 million people - this million one hundred thousand people never recovered.

- Kursk region - out of 3 million, there are 1,5 million left, the population has decreased by 50% - by 1,5 million people - they have never recovered.

- Voronezh region - the population has declined by 1 million people - it has never recovered.

- Bryansk region - the population decreased by 0,5 million people - they have never recovered.

- Leningrad region - the population decreased by 1,3 million people - the number was partially restored.

These are absolutely terrible numbers: from 30 to 55% of the population, Russian occupied areas have lost! Where and who from the occupied countries or even the occupying countries suffered such losses? No one! And the bulk of the dead are absolutely peaceful people.

How were they killed? We read:

"Consolidated act of the atrocities of the fascist invaders over Soviet civilians and prisoners of war in the territory of the Smolensk region. January 25 1945":

- Everywhere there were mass and single executions of the civilian population.

- The use of gallows was ubiquitous.

-Facts of mass burning of living people - in all areas of the region.

-Mass phenomenon was the violent death of civilians from cold and hunger (Sychevsky, Temkinsky, Usvyatsky and other areas).

- The Germans also committed brutal violence against women in all districts and cities of the region.

“Mass hijacking of the population to the German rear and to German penal servitude was carried out by invaders from all districts and cities of the region without exception.”

I should add that the Nazis burned down many villages, the surviving people went into the woods, where they died en masse from hunger, cold, and disease — no one ever considered them ... 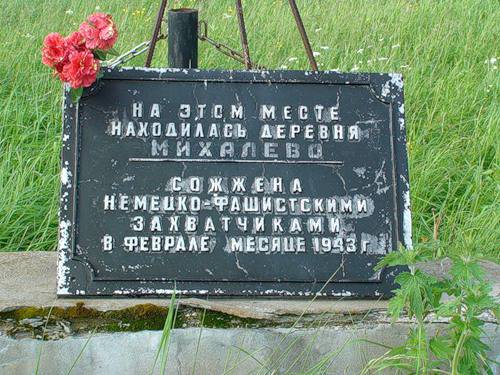 Worship cross at the village of Mikhalevo burned together with the inhabitants. Kholm-Zhirkovsky district of Smolensk obasti

The scale of the CATASTROPHY was IMPOSSIBLE to determine (and so far it was not possible to do this)! We read the stingy and scary lines from the same Act:

Lack of population! In order to understand the horror of what happened, I’ll give you a couple of digits for only one district: 8054 people were stolen from Temkinsky district, thousands died at the front, thousands died during the occupation, the current population of the district isless than 6 thousand people. That is, only it was stolen in one and a half times more, than lives in the area now! The blow was terrible and irreplaceable.

And so it was everywhere in occupied Russia.

Thus, it seemed to me, it was precisely the genocide of the Russian people, the consequences of which will probably not be overcome.

But so far no one has named the genocide as genocide - for the sake of, obviously, short-term and absolutely false interests in finding and retaining "allies and partners" among the countries that carried out or covered these atrocities (God forbid!) This was not done either in 1945, or later, or in our day.

Such inappropriate silence led today to an absolutely absurd situation: the countries that carried out the genocide of the Russians today ... teach Russia democracy, teach it in respect of human rights, impose sanctions, cry about millions raped, sunk "Guslov" and equate the USSR to ... Hitler Germany, forgetting about their atrocities! Theater of the absurd! But if Russia itself is silent, then who SAM will recall its criminal past?

I think it is necessary that, after decades of tolerant silence, these terrible sacrifices of the Russian people should be publicly announced to the whole world and from the highest tribunes!

We, I think, do not need repentance of the descendants of German, Hungarian, Slovak and other Euro-killers, we need them to remember WHAT they did and not raise their heads again, teaching Russia - they lost the right to teach 71 a year ago!

And in order for them to remember, they have to state this directly, regardless of their faces, ranks, “interests” and “tolerance”. Compensation for the victims of genocide is the business of the conscience of the occupying countries themselves (and they never had a conscience).

And in the center of Moscow, the capital of the Russian people, should be a modest, but a monument (Memorial) to all burned, hung, shot, poisoned, blown up, buried alive, starved by hunger and cold, tortured by torture, missing in captivity and in concentration camps to Russian children, women and old people who have suffered the worst genocide in the history of mankind - they deserve it.

And Merkel, Yohannis, and other Kerries, except for wreaths at the tomb of the Unknown Soldier, must also lay a wreath at this monument.