Project "ZZ". About the miner B. Clinton, the “animal” in the White House and the overthrow of Merkel

18 May 2016
48
Mrs. Clinton said the other day that if elected to the presidency, she would instruct her husband Bill to “revive the economy.” She hinted that Mr. Clinton’s knowledge is especially useful somewhere in the coal-mining areas of the country and in other places not so distant. In Poland, Mr. Clinton's theme also became popular: there they advised Bill to be treated in a mental hospital. Meanwhile, in the US they spoke out badly about Obama's “pest”: one businessman who wanted to become a senator called him an “animal”. Hot lovers News They also threw a conspiracy theological topic: about the upcoming overthrow of Chancellor Merkel in Germany. Overthrown by the Angel, of course, Russian. 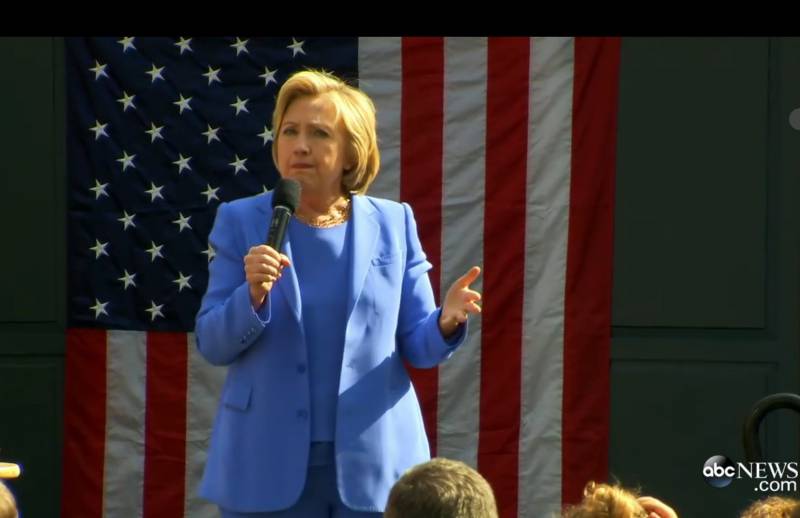 Mrs. Clinton enthusiastically talks about the upcoming changes in the fate of her husband and the "revitalization" of the economy. Apparently, the old Billy is destined to become a proletarian and inhale a lot of coal dust. No wonder he is popular among the workers. Screenshot: ABC News

As transmits ABC News, Hillary Clinton knows exactly what Bill Clinton will do when she, his wife, enters the White House.

During the campaign in Fort Mitchell, conducted as part of the election campaign, a potential presidential candidate from the Democrats said something stupid. She looked even more stupid than she usually looks when she decided to suddenly define the role of her own husband in the future administration.

According to her, Mr. Clinton, as she plans, will be responsible for the “economic revival” of the United States. Here is what she said (the grammar of the original is preserved as far as possible):

“My husband, whom I am going to make responsible for the revival of the economy, because you know that he knows how to do it,” said Mrs. Clinton (not in the style of Chernomyrdin, not in the Klitschko style. - O. Ch.) an outdoor crowd of fans.

As a potential Democratic candidate noted, “especially” Bill will come in handy “in such places” where coal is mined, as well as “in other parts of our country”.

Mrs. Clinton had previously stated something similar, for example, in early May, when she spoke in Kentucky. In those places, Billy is still popular with the white population, mainly among the working class.

Rick Moran on the blog "The American Thinker" ridiculed Hillary's idea of ​​"reviving the economy."

Well, really, an interesting topic! What will Bill, this seeker of young women, do when his little wife sits in the White House?

Hillary Clinton seems to be confident that the economic boom of 1990 was not connected with the “revolution point” and the expansion of the private sector of the economy, but arose simply because America was ruled by an outstanding thinker B. Clinton, this brilliant leader who formed a wise government. .

“Everyone,” the observer writes with irony, “has the right to his own opinion ...” But the facts may contradict opinion.

Why would Bill's husband decide that her husband is an economic genius? He just got into debt, drove the country on credit, ruining everything that Reaganomics had achieved.

And what contribution can this person make to the economy today? Not to mention the fact that Bill and Hillary are hardly close in family terms. How do they get along in the White House? Maybe Hillary will not stand and chase the hubby?

In other countries, Bill is considered bad.

As the "Lenta.ru", the leader of the ruling Polish party Law and Justice J. Kaczynski suggested Bill Clinton to see a doctor.

“If someone claims that there is no democracy in Poland, it means that he is in a state that needs to be investigated by medical methods,” said Kaczynski as cut off.

He believes that Clinton’s reasoning was badly influenced by the newspapers.

Yesterday, Obama got nuts too. He was called "animal" in the USA, I mean animals. Reports about it Fox News Latino.

A construction businessman from Florida, who is ready to become a senator instead of Marco Rubio, expressed an extremely irreconcilable attitude towards Barack Obama. He went so far as to call the latter "an animal." The name of the “implacable” opponent of Mr. Obama is Carlos Beruff.

Carlos used the above noun when speaking to a group of Republicans. He also said that Obama “hurt” the country with his military policy.

“Unfortunately,” said the businessman, “for seven and a half years, we have called this animal the president, because he is an animal, okay ...” (“Unfortunately, for animal, OK ... ").

According to this contender for the post of senator, Obama is quite sly and with his intelligent manner, “ruined this country and its armed forces.”

Later, Mr. Beruff did not give up his harsh statement and even rudely replied to Democratic Congressman Patrick Murphy, who called on Beruff to apologize for the “racially charged” criticism. Beruff called Murphy "a child" and said that he would not read the notations. He also noted that Congressman Murphy "never worked anywhere," except for "the place in Congress that his folder bought him."

The White House declined to comment on scandalous allegations, Beruffa said, according to Fox News.

Apparently, the US administration simply has no time to be distracted by critics, sputtering saliva. Obama and his government care more about the situation in Europe. And there, as a major press hints that does not shy away from conspiracy, the Russians started to overthrow the intractable German chancellor.

As Ruth Forsyth writes in Atlantic Council (The article is also reprinted by the European edition of the journal Newsweek), the Russians with their “hybrid” war got to Germany - and they intend to “harm” it and even “destabilize” it.

Among the numerous crises currently taking place on the European continent, the author notes, another “serious threat” has emerged: Russia “is actively seeking to harm Germany and destabilize it”.

“Analyzed in aggregate, Russian actions against Germany are another example of a hybrid war aimed at the legitimacy of the European government,” writes Ruth Forsyth. This is all the more dangerous, she believes, that Russia has targeted its campaign on Germany. This state is the key leader of the EU, and the German government is trying with all its might to preserve the unity of Europe in front of numerous security challenges, both internal and external.

Foresight is convinced that "throughout the entire Ukrainian crisis," Russia "has increased its espionage activities in Germany and other European states." The Russians, according to experts, use the old tactics of the KGB of the USSR, which is “destabilization and disinformation”.

Russia's attempts to destabilize Germany are expressed in efforts to foment unrest, especially by exploiting existing discontent. Back in February, German leaders of the German intelligence services warned that Russia would use the “potential of mobilization” of the Russian population of Germany (it was a question of “subversive public demonstrations”). The Russians intend to make every effort to manipulate the public consciousness of the Germans, just as they did in Ukraine. The Russian "inflammatory role" seems to be "extremely alarming."

In parallel, the Russians are conducting cyber attacks against the Federal Republic of Germany. This is also an element of the “hybrid war against Germany”. German authorities attribute cyber attack against the Bundestag in April 2015 to the intrigues of the “Russian military intelligence”. Russian hackers got access to 14 main servers, Forsyth writes. And this is just one example; Russian "attacked" and the defense companies of Germany.

What to do? According to Forsyth, Germany, the de facto leader of Europe, is responsible for the proper response "to the harmful actions of Russia." Germany should follow the example of the Swedes and recognize Russia's actions as "a threat to the country's security." Chancellor Merkel, whose position is shaking Moscow, should turn to the German public and explain the danger of Russian actions.

So, Mrs. Clinton enthusiastically told the democratic public about the upcoming changes in the fate of her husband and about the "revitalization" of the US economy. Apparently, the old Billy is destined to go to the mines, become a proletarian and breathe coal dust. No wonder he is popular among the workers. Probably, in the meantime, Mrs. Clinton will pick up a young intern in the White House.

While Billy’s little wife, unwittingly, humiliated her husband, trying to exalt him, another person, an expressive building builder businessman from Florida, called President Obama himself, calling him “animal.” This Republican, however, did not find any special evidence of Obama’s “animal life”, confining himself to a confusing statement in the spirit of “we call this animal the president because he is an animal.” There were no objections at the White House, apparently due to employment. Putin, you know, pesters!

In the world press, the conspiracy theme of the “hybrid war” was raised, which the tireless Russians who defeated Ukraine are now leading against the European Union. Scouts and hackers with a Moscow registration seek to “harm Germany and destabilize it.” Perhaps ahead of the fall of Chancellor Merkel: the Russians have already filed the legs of her throne ...

Ctrl Enter
Noticed oshЫbku Highlight text and press. Ctrl + Enter
We are
Results of the week. “Have you had any construction accidents?” Did not have? Will be! "On the godson of the "Military Review" miner Maxim and warehouse misunderstandings. Report №17
Military Reviewin Yandex News
Military Reviewin Google News
48 comments
Information
Dear reader, to leave comments on the publication, you must sign in.