18 May 2016
34
What a bright name - Tikhon! It seems a very calm, modest boy. He will defend his rightness without shouting, but with dignity.
I think that was exactly how little fearless defender of his land, Tisha Baran, was. The boy, alone killed more than two hundred fascists. The boy, during the Great Patriotic War, repeated the feat of the Kostroma peasant Ivan Susanin.


He himself was from a peasant family, large (six children!) And friendly. In everything he tried to be like his father, Maxim Ivanovich, he also loved work and took care of two younger sisters. And the Baran family lived in the village of Baiki, Ruzhansky district, Brest region (she lived not alone, but with the family of her father’s brother, Uncle Levon).

Already on the second day of the Great Patriotic War, the Fascists captured the Tales.

They broke into the house where the mother was, Daria Ivanovna, with the children. Began to search, look for the Communists and Komsomol members. And at the door was a suitcase. The second oldest brother Vasil had to go to Vitebsk on June 22 - to enroll in an art school. He folded his drawings into this small suitcase and locked it. And then - the war, Vasil went to Brest to fight with the enemy. So there was this bag, now become unnecessary. The Germans, of course, immediately spotted him. Pierced with bayonets and began to look at the pictures. Apparently, they liked the invaders of Vasil's work. And while they were looking at, Tikhon took all the children to the forest, where they sat until dark.

A few days later the wounded Red Army men were led through the village. Tikhon brought them a loaf of bread, he wanted to feed him. A fascist saw this, selected the bread and “football” him for a long time, like a ball.

Soon the whole Baran family, including even younger children, became partisans. The father and sons were in the detachment, and the mother and twin daughters, Zhenya and Nina, were at home, working as liaisons. They not only learned and delivered valuable information to the detachment. But also brought food, and sometimes, and ammunition. They distributed leaflets - there was an underground printing house in the house. They always signed these leaflets in the same way: "The Committee for the Fight against the German Occupants, the city of Brest."

The whole village helped the partisans - it so happened that almost every family had relatives in the detachment. Almost ... Except for one person who became a traitor. And this man, whose name I don’t know, once saw a mother with daughters and Tikhon in Baikas - that day the boys volunteered to help, he thought it would be hard to carry the food produced.

A traitor betrayed the fascist family Baran, they were captured on the same day. More than a month kept in prison. Starved, tortured, tortured. But they did not achieve anything: Tikhon was the first to be interrogated, and then her mother. There was a small gap between interrogations, and Tisha managed to tell her what he had thought up on the move and lied to the Germans.

The boy tried to escape several times. For the first time, they dug a certain resemblance of an underground passage, but they found Tikhon, beat them with whips and returned them. Another time he settled down in a column of prisoners who were going to work. Again noticed and beaten.

In the end, without knowing anything, the Germans sent the mother to a German concentration camp. And the children were “spared” and released.

Why? Exhausted children did not ask this question. Only Tikhon, who left the little sister at the neighbors, and himself, barely dragging his feet, was returning to the partisan detachment, guessed that they did not really let them go. I turned around, looked - suddenly tracked down, is there a “tail”? But there was no “tail”. No, really let go ...

Of course, really. Because the fascists knew that all the villagers did not have long to live. After all, the partisan detachment all the time attacked the invaders, conducted sabotage. The partisans even beat off a freight train with loot bread. They attached a red flag to it, drove on, handing out bread to people, and then poured gas on the train, set it on fire and let it into the Pina River.

The Germans suffered great losses, but they could not cope with the detachment, track down and take them by surprise. And they decided to destroy Tales cleaned.

But before, a few days (or maybe weeks) before, they had organized a “demonstration day.” It so happened that on this day Tisha also carried out the task of the partisans and came to the village. The boy saw the gallows, and on it - two hanged men, in whom he recognized his father and elder brother of his best friend Kolya. Around the gallows were the villagers - the fascists drove them to look at the massacre. They were kept for a whole day, they did not let me leave, nor to remove and bury the executed. They were released only in the late evening.

... 21 January 1944, Tikhon again went on a mission. He walked around the village, found out what he needed. In the evening I came to my neighbor, who sheltered my little sister. The girls were very happy about the brother, grabbed him, asked to be taken to the partisans. Tishka agreed, but offered to spend the night, so as not to go in the dark.

And in the morning a policeman broke into the hut and drove the children and the neighbor behind the outskirts. Tisha saw a terrible picture: all the villagers were digging a huge hole here. Guess why, it is not difficult: they dug their own grave. The fascists themselves did not intend to bury the Soviet people.

Adults dug in silence, the children cried. Many tried to escape from the ring of the fascists, who surrounded the future huge grave. But no one did it. Meanwhile, the monsters set fire to the village. And in the bitter January frost it became hot: the hard-earned, suffering good burned. It burned, giving the last heat to its masters before death.

Began shooting. One by one the inhabitants of Baek fell into a grave pit. Tikhon clasped his sister and persuaded them not to cry. He himself was preparing for death. But the Gestapo man who commanded the execution, recognized the boy, who had recently been to the mom during interrogation. And he guessed that Tikhon was still connected. The young partisan was tied up and forced to look at the massacre. Imagine: in the eyes of Silence, all nine hundred and fifty-seven people died, the last — the sisters ... What was happening at that moment in the soul of the tortured boy? What kind of monsters do you need to be in such an inhuman way of trying to subjugate yourself? And who - twelve boy ... 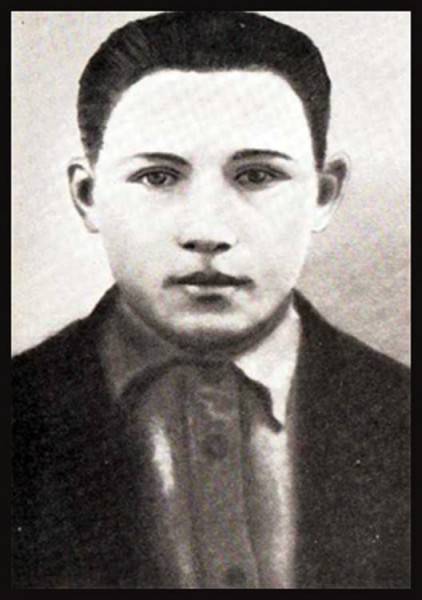 The massacre took about an hour. And then the fascists demanded from Tikhon that he lead them to the partisans. As an additional intimidation, they shot at the boy’s head. It was as if little had been fired before, as if something else could have intimidated Tikhon more than what he had seen in that hour.

There, in the forest, the partisans knew nothing and waited for Tikhon. Together with others in the squad were father and brothers. There was a commander Alexander Ivanovich Samuylik. Tikhon wondered what to do. But the fascists did not understand this reflection, took it for a deal with conscience. Gave a chocolate bar. "Calmed down": do not, they say, be afraid of their reprisals. Tikhon has a wonderful fate: he will go to Germany and from “no one” will become a man.

The boy took the chocolate and went to a dense forest. Behind him are several hundred German soldiers. They walked, walked ... The fascists suspected something was wrong several times, hailed a conductor. But he answered so confidently that they no longer doubted him. Until they realized that they had come to the marshes, which did not freeze even in winter.
- That's all for you! - shouted the boy and threw a chocolate at the nearest fascist. - For mom, for sisters! Get out of here!

He fell on the frozen ground, slain by bullets, this twelve-year fearless hero. But more than two hundred Nazis could not get out of the Belarusian swamps - almost all of those who went that night after the boy.

... Already after our Victory, the diary of one of those German soldiers who survived was found. So it became known about the feat of Tikhon Baran. There were such lines in the diary: “We will never win Russians, they even have children fighting like heroes.”

... Of the six children of the Baran family, only the eldest, Pavel, returned from the war. And the parents did not die - Maxim Ivanovich and Daria Ivanovna, who managed to survive in a concentration camp only because of the dream of meeting her dear sons and daughters.