Billions do not converge!

18 May 2016
37
For two months, it took American financiers to properly respond to Saudi “blackmailers”, in March threatening to sell off Treasury securities and other US assets worth $ 750 billion. Recently, the US Treasury for the first time released data on the debt to Saudi Arabia. The amount of debt to Riyadh - total 116,8 billion dollars. Curiously, however, that the American Ministry of Finance doubts the accuracy of this indicator. 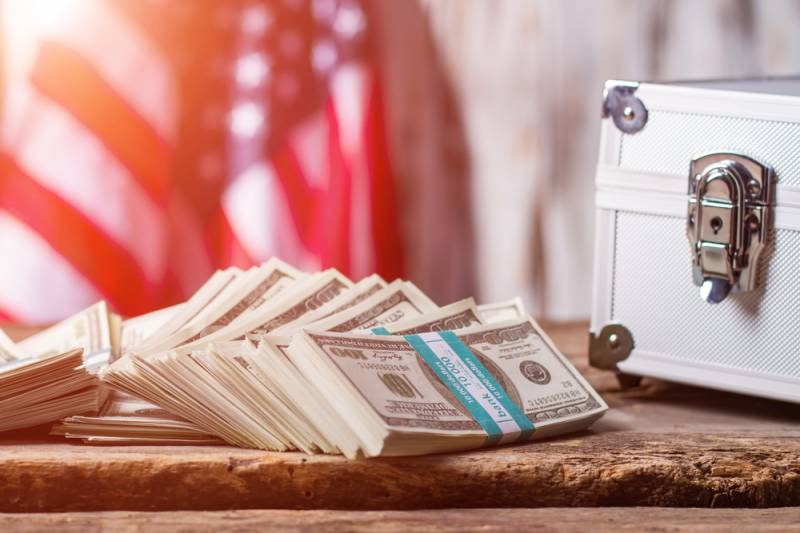 Recall in april at "New York Times" a publication appeared in which the following was noted.

In March, 2016, Saudi Arabian Foreign Minister Adel Al-Jubeir, during a visit to Washington, delivered a message to American congressmen about possible kingdom actions that would be a response to the possible declassification of information about the alleged "sponsorship" of 2001 terrorist attacks by Saudi Arabia. The head of the investigation report, classified at the time under Bush Jr., allegedly contained information on the involvement of Riyadh in the terrorist attacks. The American press wrote that the last pages of the report were classified because of the fact that the presidential administration did not want to complicate relations with the Saudis.

Saudi authorities officially deny involvement in the 2001 attacks of the year. In addition, the US commission of inquiry did not reveal evidence of the involvement of senior Saudi officials both in the organization and in the financing of the terrorist acts. However, in April, the Obama administration still held talks with congressmen, trying to convince the latter of the need to reject a bill that would allow the Saudi government to be involved in “US involvement in the terrorist attacks”.

Upon learning of the bill, the Saudis threatened to sell US-owned assets in the kingdom worth about $ 750 billion, of which the Minister Adel al-Jubeir notified the congressmen. He bluntly said that Riyadh would have to sell treasury securities and other US assets worth 750 billion dollars before the United States courts managed to freeze them.

Two months have passed since the March statements by Mr. Al-Jubeira. The late response of Saudi Arabia was given by the US Treasury Department. That's what the Ministry of Finance is for to operate with numbers. By the way, the numbers are also March.

According to «Bloomberg»The US Treasury released a breakdown of US debt holders. Until now, for more than four decades, data on Saudi Arabia were kept secret.

The publication indicates that the amount of Washington's debt to Riyadh was 116,8 billion dollars in March 2016. Moreover, it decreased by almost 6% compared with January.

It also became known for the first time that Saudi Arabia was among the ten largest US creditors (the largest are China, $ 1,3 trillion, and Japan, $ 1,1 trillion).

However, this is not all. Information disclosure poses new questions rather than answers.

The fact is that Saudi Arabia’s foreign exchange reserves amount to 587 billion dollars. Approximately two-thirds of them are expressed in dollars - central banks follow the generally accepted rule.

The United States began to publish data on Treasuries' external owners from 1974. The treasury policy was based, nevertheless, on non-disclosing Saudi investments: Saudi Arabia was part of the 14 group of other countries, mainly OPEC members, including Kuwait, Nigeria and the UAE. This group held 281 billion in Treasuries as of February 2016.

The “special decision” on non-disclosure of the debt owed to the Saudis, Bloomberg notes, was made after the “oil shock” (oil embargo in the USA) in 1973. It was one of the concessions of Washington, who wanted to maintain "strategic relations" with Saudi Arabia and have access to its oil.

The issue of Saudi Treasury bonds is becoming increasingly important as the monarchy is faced with strong financial "pressure" caused by the decline in oil prices and the need to wage "expensive wars" in the Middle East. Last year, Saudi Arabia had already spent 16% of its foreign exchange reserves to “plug the hole” in the budget - the deficit was the largest in a quarter of a century (according to the central bank of the kingdom).

The publication has published a table of US debt to oil-producing countries (data from the US Treasury as of March, published Monday this week).

So, note, there is a difference in the indicators of American debt to the Saudis. If the Saudis talk about US liabilities at about $ 750 billion, then the US Treasury gives out much smaller numbers, albeit with a reservation: Saudi Arabia’s foreign exchange reserves, they say, are 587 billion dollars, and two-thirds of such reserves are usually expressed in dollars. Therefore, the US debt to Saudi Arabia may not amount to 116,8 billion dollars, but much more. The US Treasury does not deny this, only it can not bring exact figures!

However, for a department that for more than forty years secretly owes to the Saudis, this is apparently an ordinary practice. We would not be surprised if the Americans “lose” some of the debts, and then, you see, the “color revolution” will break out in the kingdom. The former “strategic” friendship between Washington and Riyadh is already gone. Yes, and now the Americans own oil, shale. Now, former strategic partners have become economic competitors.

Observed and commented on Oleg Chuvakin
- especially for topwar.ru
Ctrl Enter
Noticed oshЫbku Highlight text and press. Ctrl + Enter
We are
Results of the week. “Have you had any construction accidents?” Did not have? Will be! "Projection of force
Military Reviewin Yandex News
Military Reviewin Google News
37 comments
Information
Dear reader, to leave comments on the publication, you must sign in.