Croatian war criminal received five and a half years in prison

13 May 2016
24
Tomislav Mercep, one of the main Croatian neo-Nazis during the collapse of the SFRY and a prominent war criminal, was convicted by a Croatian court of five and a half years in prison for war crimes against civil Serbs. The judge announced the number in 43 killed at the hands of Merchep and his subordinates.


Meanwhile, Mercep and a group of his thugs, who were called the special squad “Autumn Rains” of the Croatian Ministry of the Interior, only in 1991, several hundred civilian Serbs and prisoners of war were killed. In the camps in Pakračka-Poliana and Zagreb near 300 people, in Gospic and Karlobag 123 people, in Vukovar around 80 people.

Former subordinates passed the boss with giblets, describing in detail how they cut people. Mercepa Deputy Miro Bayramovich gave the following testimony at the end of 1990.

“I am directly responsible for killing an 86 man,” Bayramovich repented. - I go to bed in the evening with this and wake up with it in the morning if I can fall asleep. It was with this hand that I killed a 72 man, among them nine women. For us, there was no difference: all the Serbs were our enemies. The most difficult thing is to kill the first person and set fire to the first house, then everything follows a pattern. We were killed by bullets in the forehead, because we did not have time. We had an order from the command: to reduce the number of Serbs in Gospic. Then I did not feel that the Serbs - people just like us, did not feel that they, too, have fathers, brothers, children. But I did not kill the children, because then I could not look into the face of my daughter. ” 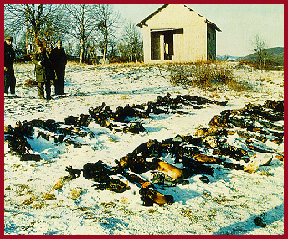