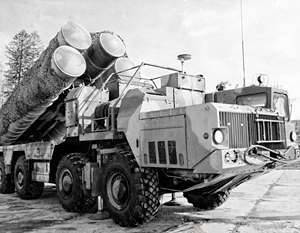 The mobility of the C-300 anti-aircraft missile systems will be of great service to Iran, which seeks to shield its scientific and industrial facilities from possible attacks from Israel. So the experts appreciated the transfer of the air defense system received from Russia to the disposal of the Islamic Revolutionary Guard Corps announced by the Iranian Defense Ministry.


The C-300 Russian anti-aircraft missile systems delivered to Tehran have been put into service at the “Khatam al-Anbiya” base - under this name, we will explain, Iran’s entire air defense system (representing one of the four arms of the Iranian army).

On the transition of C-300 to the disposal of "Khatam al-Anbiya", subordinate to the Islamic Revolution Guards Corps (IRGC), Iranian Defense Minister Brigadier General Hussein Dehgan said on Tuesday.

Recall, on April 17, the Iranian authorities showed calculations of the C-300 anti-aircraft missile systems received in Russia at a military parade in Tehran on the occasion of the celebration of the National Army Day.

Russian supplies and own development

Russia and Iran signed a contract in 2007 for the supply of C-300 worth about 900 million dollars. However, with the adoption of the UN Security Council’s 9 June resolution on Iran, which imposed a ban on the transfer of modern weapons to it, the winding down of military-technical cooperation between Russia and Iran began. In April, 2010, the Russian president lifted the ban on the supply of C-2015 to Iran.

9 November 2015 of the year entered into force a contract to supply Iran with Russian C-300 air defense systems. Iran’s receipt of the first batch of C-300 under a contract with Russia on 11 on April was announced by the representative of the Ministry of Foreign Affairs of the Islamic Republic, Hussain Jaber Ansari. According to him, the transfer of the next batch "will continue in the future."

Iranian Defense Minister Hussein Dehgan said on Tuesday that the country will also soon begin producing its own version of the air defense system, an analogue of C-300, called “Bavar-373”. “This system will be able to capture, lead and hit several targets simultaneously, including ballistic and cruise missiles, unmanned aerial vehicles and combat aircraft. The production line will be launched this year, ”the Minister noted.

"Seal of the Prophets" and "Divine Light"

“Khatam al-Anbiya” (translated as “Seal of the Prophets”) was withdrawn from the Iranian Air Force in 2008 and turned into a separate branch of service at the direction of Iran’s supreme leader (rahbar) Ayatollah Ali Khamenei. The IRGC is directly subordinate to the rakhbar as the supreme commander of Iran. The headquarters of Khatam al-Anbiya is located in Tehran.

In August, 2012 began construction of the largest air defense base near the city of Abad in the province of Fars in central Iran, a few hundred kilometers southeast of the capital. The territory is located in the Iranian Highlands, at an altitude of about 1800 m above sea level.

It is reported that the base air defense cost 300 million dollars will be designed for six thousand personnel, including employees of the military training center. The representative of Abad in the Majlis of Iran, Rahim Zare, then stated that "this air defense base will be the result of achievements in all fields of science around the world." It should be noted that the reports about the beginning of the construction of a base in Abad coincided with the first statements of the Iranian Ministry of Defense about the development of the above-mentioned Bavar-373 air defense system.

Khatam al-Anbiya includes in its structure a center for the development and testing of modern types of missile weapons and radar systems. So, judging by the report of the Air Defense Commander Brigadier General Farzad Ismaili, Iran’s C-200 air defense missiles that were in service with Iran were optimized. Thanks to optimization, the time required to launch a rocket after detecting an air target was significantly reduced. The upgraded C-200 complexes have already been tested during joint exercises of the Iranian army and the IRGC in the area of ​​the strategically important port of Bandar Abbas (in the Strait of Hormuz, connecting the Persian Gulf and the Indian Ocean).

Some of these developments - the Rassid-32 radar, as well as "new and advanced anti-aircraft missiles and artillery systems" - were tested in the 2014 year during maneuvers, codenamed "Misbah al-Hoda" ("Divine Light"). As reported by the state news agency Fars, the center of the exercises, “as close as possible to the combat conditions,” was the island of Kish, located in the Persian Gulf, where the air defense units are located, which have already received new equipment.

The development of air defense is becoming one of the directions for creating a military image of Iran. So, in October 2015, the official Tehran showed a video, which features a new underground base of rocket launchers, which, as the Iranian military said, is at a depth of 500 meters. Then, the commander of the Air Force and the military-space forces of the IRGC of Iran, Amir Ali Hadjizade, said that the demonstrated object is only one of the underground missile bases in the country.

Jericho and his opponent

10 March 2016 of the Year The Tehran Times issued a statement to the Hajizadeh, from which it followed that the SEC of the IRGC had missiles capable of hitting Israel.

We also note that on the eve of Reuters, citing a source in military circles in Tehran, reported another test by Iran of a ballistic missile with a range of up to 2 thousand km with a deviation from the target of no more than eight meters. Flight range allows you to reach any target in Israel, according to Reuters.

Said Gafurov, scientific director of the Institute of Applied Oriental Studies and African Studies, is confident that the deployment of C-300 complexes is aimed primarily at securing Iran’s scientific and industrial facilities from possible attacks by Israel. This will have a powerful psychological deterrent effect, the expert said in an interview with the newspaper VIEW.

“This is perfectly rational and purposeful. The main advantage of the C-300 complex, which has not yet been fully delivered, is that it is mobile. Those who want to fly and bomb some object in Iran, they will have to first suppress a set of Russian-made air defense systems. And this is not such an easy task, ”said Gafurov.

“We need a minimum of 36 aircraft”

As Konstantin Sivkov, the first vice-president of the Academy of Geopolitical Problems, noted in his commentary on the VIEW of the newspaper, “in order to suppress C-300 division, you need to select at least 36 aircraft, if not more. Five divisions need 180 machines. At the same time, of course, there will be losses. ” The magnitude of such losses, he said, will depend on what forces and means will be used.
“If there is a complex use of electronic jamming, then the losses can be within 10%. If Iran is able to take effective measures to counter the EW, masking, etc., then the losses will exceed 20 – 30%. For NATO (in the event of a hypothetical attack by the alliance against Iran), this is already an unacceptable loss. "If these air defense systems are delivered in a system with others, say, with the Panthers, which will shoot down missiles aimed at C-300, then NATO losses will be very large," Sivkov suggests.

At the same time, as the former commander-in-chief of the Air Force, Hero of Russia General of the Army Peter Deinekin, in the words of US President Barack Obama that the US military can bypass the C-300 systems delivered by Russia to Iran, there is a big part of the truth. The US Air Force "has everything necessary to overcome both passive and active air defense systems," Deinekin notes.