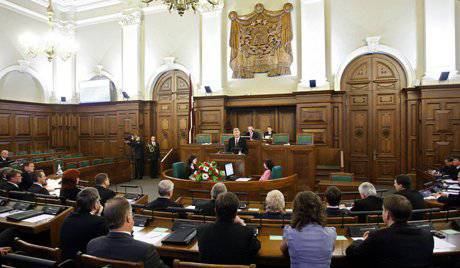 Andris Berzins, the President of Latvia, was sent to the Seimas for consideration of an amendment to the Constitution regarding the assignment of the status of the second official language to Russian. This was reported by the press service of the head of Latvia.

Berzins himself is actively opposing this popular initiative. He considers it to be the actual refusal of Latvia from the status of a national state. The Latvian president insists that the draft contradicts the foundations of the "Constitution, the idea of ​​establishing Latvia and restoring the independence of the state."

In the accompanying letter to Solvita Aboltine, Speaker of the Seimas, the Latvian President noted that the bill does not contribute to social cohesion. According to the Speaker of the Seimas, this issue may be considered by the parliamentarians on December 22. If the parliament does not accept these amendments, the question will be put to a referendum. The speaker said that already February 18 referendum on these issues may take place.

In order for the Russian language in Latvia to receive the status of the second official, 770 thousand citizens must vote for this proposal in a referendum.

Vladimir Linderman, the leader of the January 13 Movement party, one of the initiators of amending the Constitution, expressed the hope that citizens would be active in the referendum and would be a shock to the ruling elite.

"The referendum should be a shock therapy. It should relieve from the illusion that a purely national state can be created in Latvia," said Linderman in an interview with the radio station Baltcom. He believes that the authorities want to hold a referendum on this issue as soon as possible in order to avoid discussions in society about the role of the Russian language.

"Such discussions may show that the population of Latvia is not as radical as it is thought, and the ruling circles are very frightened," said Linderman.

The action "For the native language", the main purpose of which is to assign the status of the second official language in Latvia to Russian, was launched in the Republic of 7 in March of this year. At the first stage, notarized signatures were collected. The organizers, largely thanks to the activity on the Internet, managed to collect 12500 notarized signatures. Subsequently, they were filed with the central election commission.

This, according to the laws of Latvia, became the basis for the organization of a formal collection of signatures by the central election commission to bring up the issue of relevant amendments to the Constitution to parliament. The collection of signatures was carried out 1 – 30 this November. It was necessary to collect signatures from 10% of Latvian voters, which is approximately 155 thousand people.

On the eve of Arnis Tsimdars, chairman of the Central Election Commission, said that more than 187 thousand Latvian citizens, which is approximately equal to 12,14% of the total number of people who have the right to vote, spoke in support of Russian as the second official language.

Earlier, the Latvian president spoke out against giving the status of the second official Russian language and declared his readiness to resign if this becomes a reality. Against the introduction of these amendments were also the ruling coalition party. They called on Latvian citizens to support their appeal in a referendum. At the same time, the Russian-speaking opposition believes that all citizens of the country should take part in the referendum.
Military Reviewin Yandex News
Military Reviewin Yandex Zen
16 comments
Ad