Where are the pale-faced? 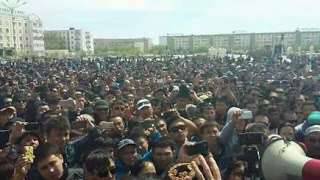 A series of rallies against the sale of land once again highlighted the problem of non-participation in the political life of a country of Russians, or rather Russian-speaking. At these meetings, non-orders could be counted on the fingers. So the first thing that strikes the eye, the current "land protest" - especially Kazakh.


Why is that? If this protest concerned only the issues of the sale of land, one could try to explain this by the lack of patriotism in non-orders. They say that lodging syndrome does not consider the land on which they grew up and live as their own. But there is BUT. In my opinion, the main reason is not in the ground.

The topic of selling land is just a reason to protest against the deterioration of the living conditions of the majority of Kazakhstani people in the context of the unfolding economic crisis. And here it is necessary to distract a little from our question. For those who are not yet in the know, let me remind you that private property in Kazakhstan has existed since 2001. Since 2003, the land of Kazakhstan has been sold to individuals and leased to foreigners.

Consider, all these years, no one remembered that "the earth is the mother, and the mother cannot be sold." For fifteen years, the “motherland” has been sold to the right and left, and no one has been concerned before. And suddenly everything changed. Why? The answer is on the surface - because it was FINE. Oil sold well, there was money in the country, and everyone, anyway, had enough of it.

Not to the ground was. All the grandmothers earned, and the particularly successful ponies, and even realized their political ambitions. Today, when it ended, for some reason they suddenly remembered that the earth is the mother, which cannot be sold. One would like to ask: where were you before, when it was sold for a pittance "by its own means" and left to die from abandonment, mediocre and predatory use?

Suddenly something happened, and everyone was interested in the fate of the earth. And this is despite the fact that the amendments to the Land Code do not change anything at all. Land, as it was, remains in private ownership, and it also continues to be leased. Where is the logic of the “No Land Sale” requirement, if it has long been sold three times and divided between those who are in power and with money?

I will answer that. Not in the land business! The problem is deeper. People just boiled over. Life got it. The crisis specifically affected all who are accustomed to living their work and for one salary. Suddenly it became clear that living in such a state was unbearable. People in the last two years have accumulated so much discontent and anger that they already require going out. The theme of “selling land” is a good unifying reason for expressing one’s discontent and making demands on people in power who are unable to solve the problems of a country and in fact bring the country to a hilt.

And the authorities are well aware of this. Understand, but continue to tease people. After all, it really looks like a mockery: there was no one hundred pound of land for people promised by the 10 president, but for an auction for money, please take as much as you want. It is clear that the auction will be again for those with money. But ordinary people do not have them today. That is, all this bodyaga with the land will once again pass by them.

Really there are no sober-minded people in power, who understand that today it is better to hold such affairs and not to pedal? After all, there is a risk that people may rebel seriously. The people are no longer the same: angry, annoyed, and who do not believe, who still have a little bit more to lose.

He used to be well-fed and good-natured and didn’t really ask himself to whom and how land was sold in Kazakhstan. Because he, too, fell from the golden oil, free-fall rain, and he was content with this, not claiming more. All shop on the mediocre sale of national wealth closed.

The feast of ponte and ambition is over, it's time for a bitter hangover. And for the majority there was no choice but to ask the question: “Who brought all this to the end and who should be responsible for this?” Although such slogans in the open while no one at the rallies does not raise, then believe me, they are already present in the minds of very many people of Kazakhstan.

But let us return to our question about “pale faces”, which for some reason were not observed at these meetings. Given the above, did the crisis really not affect them and their lives did not become more difficult? No, of course! They, just like the Kazakhs, are dissatisfied with the situation and also curse the authorities in the kitchens and smoking rooms. But they don’t go to the square. What is the reason?

Someone explains this by the low drive of the Russians, they say, this nation has already passed its evolutionary peak, the blood is not boiling, they do not need anything. Someone rests on the lack of patriotism: they say, they are tenants in spirit, there is no love for the fatherland in them, they live for one day. Still others blame the nationalists, who, with their scoldings of Russians, cultivate an inferiority complex in Russians: they say, what should the Russian do at the rally, where everyone speaks Kazakh in principle. There are other explanations.

I have my own explanation. Kazakh Russians are like this because they are much more subject to propaganda processing by Russian (or more precisely Putin) propaganda. They hold onto Nazarbayev for the most part. It is for them, much greater authority than for the Kazakhs. They firmly believe that he is their guarantor of security against Kazakh nationalism, that he will not have him, and they are guaranteed problems similar to those that Russians in Ukraine have.

They are so inspired, and they sincerely believe in it. And local nationalists warm this religion with their often unwise and inappropriate actions. To the joy of those in Akorda who support and cultivate this stereotype of the public consciousness of the Russian-speaking diaspora.

From this it turns out that the Russian-speaking Kazakhstani, who survives in a crisis and in the same way as his Kazakh neighbor, who resents his life, will never go to a rally against power, which he regards as a guarantee against nationalism. Because of the two evils between the thieving power and the nationalists, he chooses the least - power. Here is the answer to the question “Where did the pale-faced go,” meaning their absence at the rallies — they were taken away by the authorities.

So, in every Russian there are two states fighting between each other - discontent and anger at the power, which he, being sincerely indignant, will scold in his kitchen, and the fear of "Kazakh Kazakhs raising its head."

In my opinion, if we want something in our country to start changing for the better, then we cannot do without those who today see the power as the guarantor of their well-being, which is about half of the country. In a situation when the society is divided into two parts, which stand on fundamentally different positions with respect to the authorities, we will fail to do anything. This is wall to wall. We will be bogged down in a confrontation that is fraught with great upheavals and perhaps even victims.

Therefore, it is very important to break this fear of “Kazakh nationalism”, which is not yet available, but which can be arranged for us. It is fundamentally important for the Russian-speaking understanding of the importance of changing the political system to prevail over the fear of nationalism. How to do this is today one of the main tasks of those who want to see Kazakhstan democratic. Without solving this task, the project "Democratic Kazakhstan" has no future.

Ctrl Enter
Noticed oshЫbku Highlight text and press. Ctrl + Enter
We are
A great interview with Sergey Lavrov: about Ukraine, Obama and IranWhat you didn't want to know about England
Military Reviewin Yandex News
Military Reviewin Google News
218 comments
Information
Dear reader, to leave comments on the publication, you must sign in.