Secrets of the Battle of Grekov

The eminent Soviet battle painter, the Greeks, became a symbol of military art. But in his family there were many secrets that he was forced to hide. Fate led the artist on the military path. He was born on the Don, where the Cossack traditions of service have long since introduced boys to military culture.

The official biography of the artist said that the huge panorama “Defense of Sevastopol” was for Grekov the first great work that he performed with many talented students of Rubo.

He again tries to embark on the “peaceful” artistic rails, having written several landscapes, but the one-year conscription brings changes in his life. While serving the service, Grekov made many sketches that personify the uniqueness and originality of the Cuirassier, Pavlovsky, and Grenadier regiments. 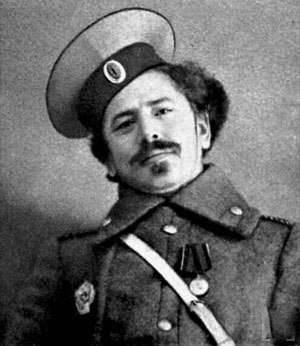 In 1911, he changed his surname and patronymic. Now, instead of Mitrofan Pavlovich Martyshchenko, he became Mitrofan Borisovich Grekov.

This happened after the exhibition of his first work, which received universal praise and brought him the official title of the artist. 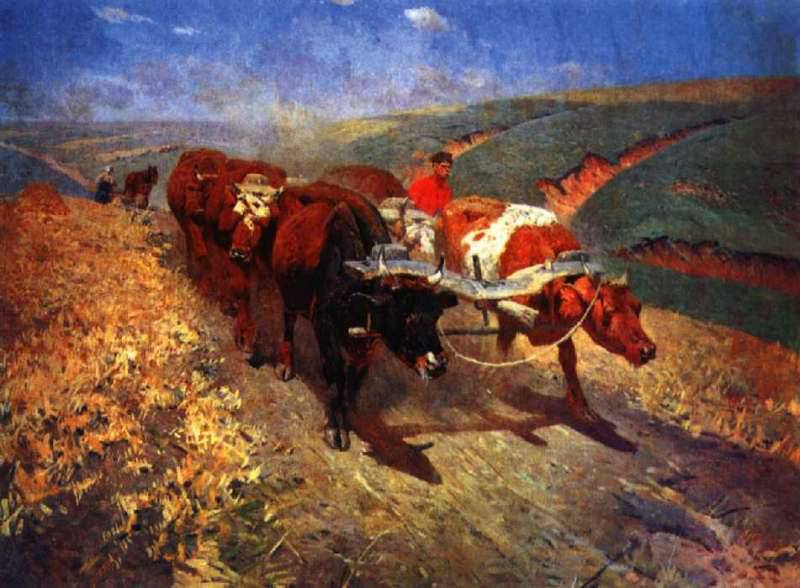 First World War, the German front. Few people realize that a simple orderly in a Cossack hundred not only fights with the Germans, but also writes pictures in his mind, so that later, in outline, to put them into practice. He is able to understand and accurately convey the character and life of a simple soldier. These are amazing drawings! If you look at his pencil sketches made around the year of 1914, then the maximum naturalism of the drawings is most striking. The artist manages to convey the thoughtfully-inspired face of a soldier who writes, perhaps the last piece of news home, but the Russian soldier is not thinking about the imminent death and pain. His face glows with happiness of touching his people through writing.

Severe wound. Homecoming. Revolution. All of these events are whirling like an avalanche in Grekov’s life and leave their red mark. And this trace is a civil war, when a brother goes to his brother, when blood ties are broken alive.

In the 1920 year, when the Red Army enters Novocherkassk, Grekov paints a painting entitled “Introduction of the Volodarsky Regiment to Novocherkassk” using canvas and oil. It is this picture that will become a dividing line that Greeks can no longer, and will not want to go, for ideological reasons. 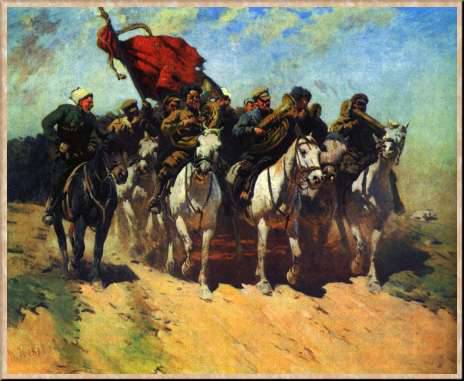 He voluntarily puts on budenovka himself and goes to teach the first courses of military artists, organized on his own initiative. The new government needed talented people who could correctly build a military ideology in paintings and posters. Grekov succeeded in this task.

For which he was awarded high praise from the commander of the North Caucasus Military District, Klim Voroshilov. In his autobiographical essay, Grekov writes about this meeting in the following way: “In 1920, I meet the leaders of the First Cavalry Army, KE Voroshilov and SM Budyonny. I submit a note with a proposal to assist me in my intention to write on the topic of civil war. I attend a meeting about my proposal. I remember this conversation literally: one of the commanders says that we have an army without pants, and we will write pictures, Klimenty Efimovich replied to the commander: “You think wrong, we must have both the army and art,” and he promises to lead me paints from Moscow ". 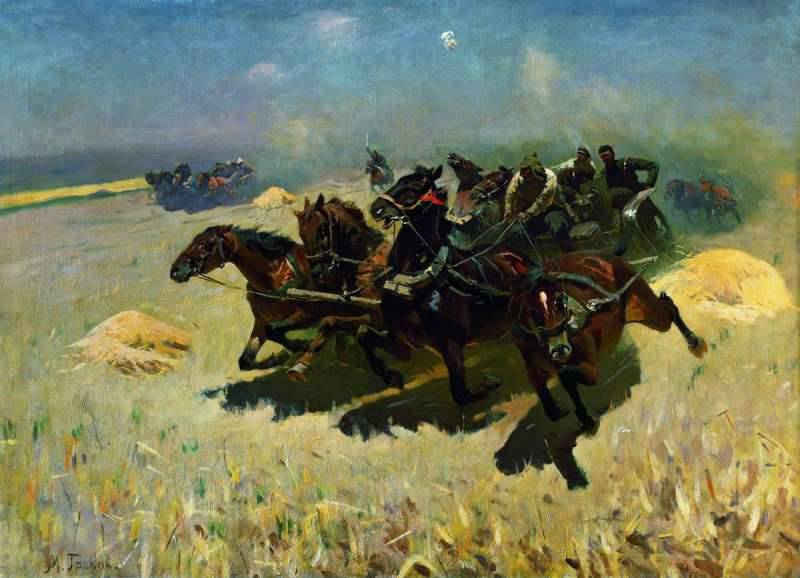 Judging by the pictures, the artist’s paintings are also highly praised by Budyonny. “To the detachment to Budyonny” (1923), “Tachanka” (1925), “On a halt” “On a hike. First Horse (1927). In all the paintings, the main characters, in fact, are not people, but surprising, swift, lively horse fighting ("Red Army tachanka. Departure for the positions", 1933).

For several years, he creates several grand paintings. Practically in each of them, with rare exceptions, horses are present. He loved horses. With love I wrote out the character of a horse that had fallen into terrible war. He always interfered with the center of the composition of one or more horses. The paintings became alive, they moved, lived, breathed, rescued, attacked, defended, died, remaining forever imprinted on the canvas. This amazing technique of the artist's work became the basis for his subsequent creations. 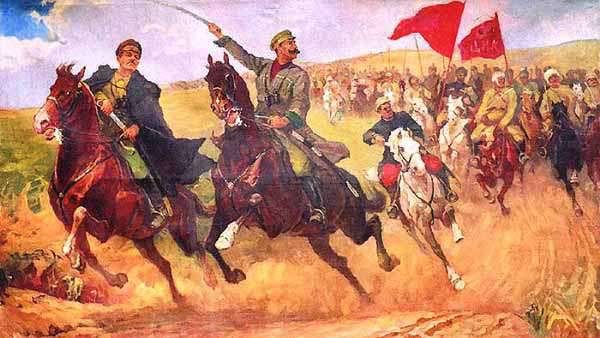 But in 1926, he wrote a report on demobilization from the army for health reasons. He leaves the army to be closer to her: the current work takes him a lot of time, and he wanted to write as many pictures as possible. And he writes. Every year his new paintings are born: “The flight of the whites from Novocherkassk in 1920”, “Kombrig leads to the attack”. 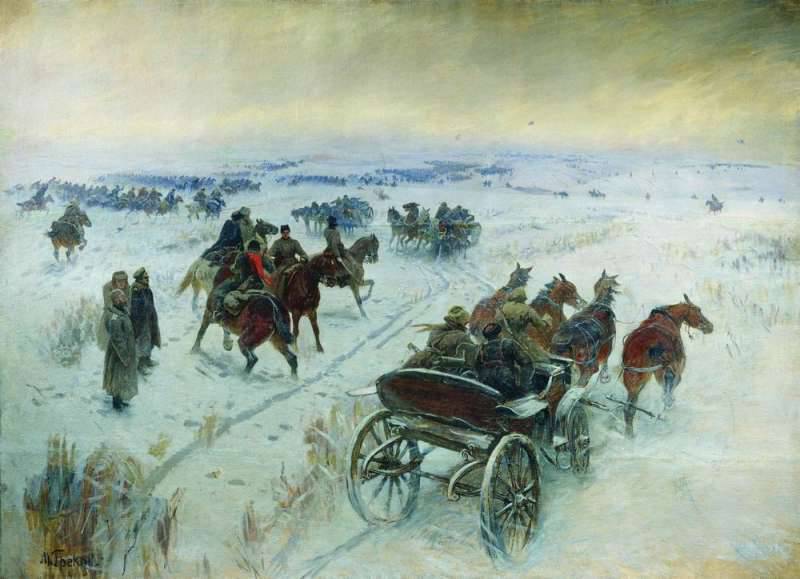 And finally, in the year 1929, on the anniversary of the First Cavalry Army, he created the first Soviet diorama “Taking Rostov”. Unfortunately, during the Second World War, this artist's creation was irretrievably lost. The circumstances of this loss are unknown. 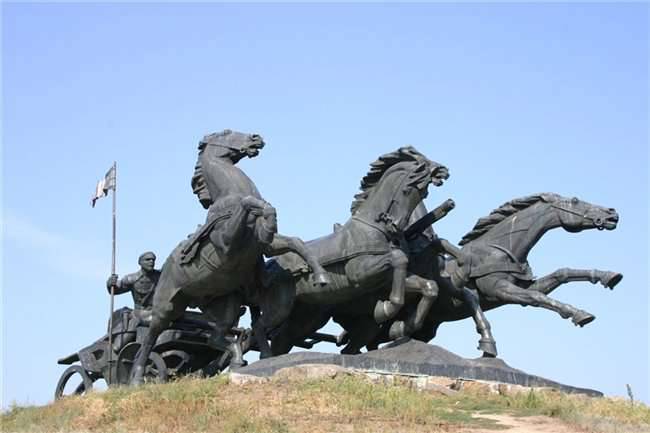 About five years later, Grekov moved to Moscow to become one of the members of the Union of Soviet Artists. The Stalinist order - the painting "Perekop" consisting of four dioramas - was to become a monumental work of Soviet artistic art. And it was the Greeks who should have headed this grand business. That was the idea. But the Providence was destined to make it so that during the preliminary sketches in the Crimea the artist unexpectedly suffered a heart attack. 27 November 1934, he was gone. He was 52 of the year. 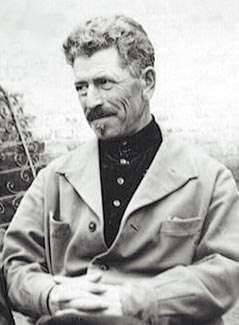 Relatives and friends of the artist were shocked by what happened. In memory of his friend, Voroshilov ordered to organize in the Stalin Special Separate Cavalry Brigade an art workshop of the amateur M. Red Greater. She marked the beginning of the creation of the same name studio of military artists.

Two schools are named after him: the Rostov Art School and the Odessa School. In Novocherkassk, in a spacious Cossack house on a floor and a half, the M. B. Grekov. In this house he created his best paintings. 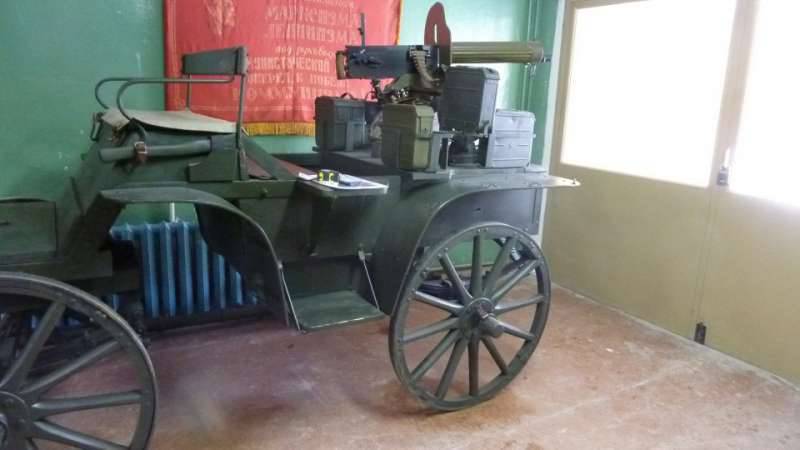 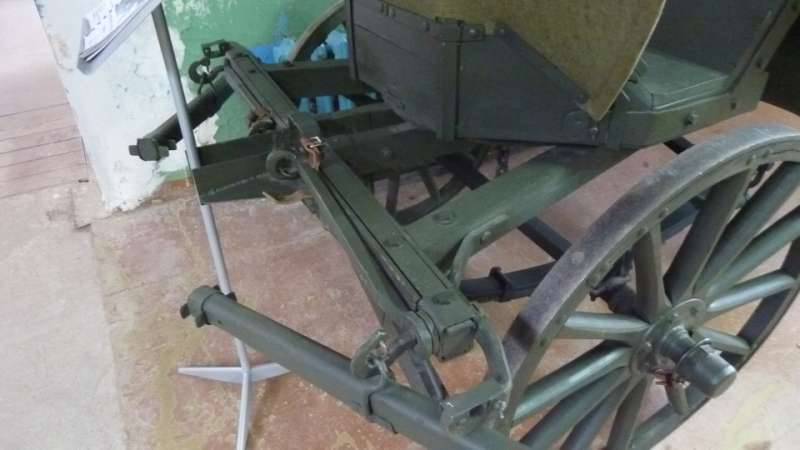 Since 1996, the best works on the military-patriotic theme annually to the Victory Day are awarded the gold and three silver medals named after Grekov. In many museums of the country are stored pictures of the famous artist.

A lot of secrets left behind the Greeks and in his artistic legacy. Preserved 53 of his work. Basically it is landscapes. (To be honest, I personally don’t like landscapes by themselves. They are dull. It seems that the artist selected the appropriate background for his future paintings.)

He wrote in memory of his native lands the painting “Sharpievka Khutor. 1912 ”, when he was still at the Academy of Arts. But he tried not to exhibit it.

We visited the place where the house stood, in which, according to the assumptions of fellow villagers, Mitrofan Borisovich was born. He was a native of a small Cossack village Sharpayevka (now the Kostino-Bystryansky village) of the Yanovsky volost (now the Morozovsky district) of the Don Cossack Region. It must be admitted that countrymen respect the heritage of the great artist. In his honor, named one of the streets of the farm.

But the rural childhood did not become decisive in its development as an artist. Mitrofan Borisovich will write in his autobiography about how difficult it was for him to realize his infamy, from where did the gift for drawing come from: “He spent his childhood in a working family of farmers. Rural life, steppe, horses, oxen. Until 17 years, I did not see a single picture, except for reproductions in the magazine "Niva", but I drew from my childhood, of course, from myself, because I had no idea about drawing from life. In my family, besides me, no one was fond of it. My only leader, who may have determined my genre, is my uncle, a peasant. He often cut out horses and bulls for me from an extremely primitive tree, even without legs. I remember, I realized that they are a little like horses and bulls. I remember that I was somewhat embarrassed by their frozen form. Over the years, I have developed a great passion for drawing, which has become my holiday. ”

But local historians found documents confirming that, together with the other five brothers and sisters, the definition of the Noble Deputies ’Assembly of the Don Cossacks from February 27 1915 of the year Mitrofan was numbered among the noble family.

Other literary discoveries of Nikolai Ivanovich Prikhodko, a local historian from the Milutinsky district, are also significant for posterity. His research on the fate of the battle has allowed for the first time to make the Grekov family tree.

In his monograph “The Ancient Family of the Greeks” (a copy is kept today in the Milyutinsky Museum of Local Lore), he proved that Mitrofan Borisovich was born not in Tarasovsky, but in the Morozovsky district of the Rostov region. After seven years, the boy lived in the Milyutinsky District, in the village of Ivanovka, founded by his grandfather, trooper Ivan Borisovich Grekov.

The local ethnographer writes about this in the “Annals of the Milyutinsky Territory”: “The Grekov family comes from its deep roots in the time when the Cossacks of the second half of the 16th century were actively formed. The artist's father, Boris Ivanovich, in 1890, by coincidence of family circumstances, was forced to leave the Sharpayevka farm near the village of Morozovskaya and settle on the Berezovaya River. But he did not come to an empty place, but to a settled landowner farmstead with a house, a garden and outbuildings. The first four classes of the future artist studied at the Mankovo-Berezovsky parochial school, where in the fall and spring he was taken to the roadsteads, drawn by a horse named Rusak.

Subsequently, the artist depicted his four-way friend on a canvas called "Horse Rusak."

While studying at the Kamensky District School, at the Odessa Art School and the St. Petersburg Academy, Mitrofan Borisovich spent his entire summer holidays in his native Ivanovo estate. He worked together with the rest of the family in the field, fishing, hunting.

All Greeks were passionate hunters.

Mitrofan did not part with the easel. In Ivanovka, he wrote or made sketches of such pictures about nature and life, like “Luga”, “Kopichki”, “Fox Hunt”, “Vyselki Sloboda Mankovo-Berezovskaya”, “Manor of a Prosperous Peasant” and others.

After the civil war, there was an elementary school in the Grekovs' house. Then, during the construction of the school, the house was dismantled simultaneously with the church.

Mitrofan Borisovich all Novocherkassk period of life, until the departure to Moscow in 1927 year, annually visited his native farm, visiting his friends - the peasants Shumsky.

With the active participation of local historian Nikolai Prikhodko, a memorial plaque was installed on the building of the Mankovo-Berezovsky school, where the famous artist studied, tombstones of the noble family Grekov were collected, and the tombstone of great-grandfather Mitrofan Borisovich was found.

Similarly, the detective was looking for Nikolai Ivanovich traces of the Greek family. He managed to find out that the descendants of the artist live in Canada. At the invitation of a local historian in 2002, guests from Canada (the painter’s nephew Alexander Alexandrovich and his wife Elena Vsevolodovna) came on a private visit to the Milutinsky district. Thanks to the participation of Prikhodko, the guests saw places dear to the heart, associated with the name of the legendary ancestor: moving along the Greek highway, the general's beam, the former estate of the Grekovs, the graves of grandfathers. Unfortunately, local historian Prikhodko is no longer alive. However, I am sure that many more interesting pages about children’s and youth’s years will have to be opened up. After all, from here comes the main light of his canvases - the inner light of kindness, despite their military orientation.

Few of the artists managed to bring drops of good in the hard military paintings. This was another distinctive feature of the great Soviet battle. His work became the basis for other artists to create magnificent works on military subjects.