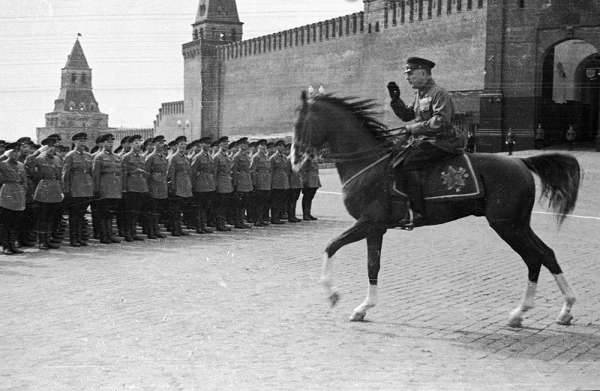 The name of Kliment Voroshilov was called cities and factories, Tanks and ships. Songs were written about him, and each pioneer dreamed of earning the honorary title of Voroshilovsky shooter. He was a symbol of the Soviet dream - a simple locksmith who became the people's commissar of defense and even the head of state.
But the recent 135 anniversary of the national idol no one noticed.

In April, the commanders of the Red Guard units gathered at the Rodakovo station near Lugansk in April. The situation was serious: from the west, the Germans pressed the steel roller, from the east, the Cossacks Ataman Krasnov pushed on. Only the unification of forces could save the Reds, but it was not easy to choose a common commander. Gradually one name broke through the chorus of voices: "Klim! Let's choose Klima!" We pushed forward a short, strong man in a leather jacket and greasy boots.

- Do not play the fool, command! - rushed in response.
Finally he waved his hand.

- Only I have a short conversation. Not afraid to die - go, afraid - to hell!

So Klim Voroshilov became the commander of the 5 th Soviet army. Later it turned out that he had been preparing these elections for two weeks, persuading, and sometimes intimidating, the riotous red leaders. It looks rustic, even naive, he had remarkable cunning and iron will.

And without these qualities I would not have lasted so many years on the political Olympus.

Voroshilov was born in January 1881 in the Luhansk region, in the village of Verkhnee - today is the city of Lysychansk. In his memoirs, simply titled "Stories about Life," he recalled the pictures of childhood: the endless steppe with heaps of mines, the wooded shore of the Seversky Donets, the ever-hungry horde of brothers and sisters. Father Efrem Andreevich was a quick-tempered man, he did not tolerate injustice, therefore he did not succeed in life. Losing one job after another, he ended up in the penny position of a trackman. Silent prayerful mother Maria Vasilyevna meekly endured poverty and beating her husband. She hired cooks, laundresses, and when there was no money at all, she sent the children to beg. When he was seven years old, Klima was given to the shepherds, and then to the mine, where from morning till evening for 10 kopecks a day he selected rock from mined coal.

An accidental acquaintance, teacher Ryzhkov, arranged for a guy to go to school, and then to a metallurgical plant in Lugansk. And then - everything, like many: the Social Democratic circle, participation in rallies and strikes, the party pseudonym Volodya, denunciations to the police, the transport of twenty smuggled revolvers to Rostov, a meeting with Lenin in Stockholm at the IV Congress of the RSDLP. After getting acquainted with the real, Volodya made a real revolution with the burning of the prison in Lugansk. Arrest, three years of northern exile ...

And crazy love for the black-eyed Golda Gorbman, the daughter of an Odessa broker, exiled to Kholmogory for participating in the Social Revolutionary underground.

According to the laws of that time, exiles could get married if the bride accepted Orthodoxy. Golda agreed and became Catherine. They lived together for almost half a century, and Voroshilov, a rare case for Bolshevik leaders, was faithful to his wife. Even after an unsuccessful operation on the thyroid gland turned her into a heavy, swollen old woman. Their family idyll was spoiled only by the absence of children. However, not for long: in Tsaritsyn, they adopted three-year-old Petya, whose parents shot whites. Then - nine-year-old Lenya, son of the factory comrade Klima. Then - the children of the deceased Mikhail Frunze Timur and Tatiana.

All of them Voroshilov raised as their children, and all the sons later became military.

Having retreated to the Volga with the 5 Army, the newly appeared commander adopted the 10 Army, which defended Tsaritsyn from the White. Through this city lay the only way connecting the Soviet Republic with the outside world. Here Lugansk fitter and proved himself for the first time in all its glory - led the fighters to attack with a revolver in his hand, pushing the lagging behind with foul language and kicks. And after the fights, he relaxed so that even in the Pravda newspaper in paints it was reported how drunk Voroshilov in Tsaritsyno rolled the girls in threes, danced the mistress, and then fought with the patrol, who appeared to take him off. And thus, "discredited Soviet power."

The article was published at the suggestion of Trotsky, with whom relations did not immediately develop. The all-powerful narkomvoena was irritated by the independence of the "red general" who could not stand the former royal officers. Troops Voroshilov sent from Moscow instead of headquarters were sent to prison, which overwhelmed Trotsky's patience. Klima was sent to Ukraine, where everyone fought against all: white, red, Petliurists, Makhnovists, countless gangs of "greens".

In this mess, Voroshilov felt like a fish in water.

He relied on Semyon Budyonny and his 1 Cavalry Army, which was not typical for the Soviet canons: it replenished and fed at the expense of the local population, in the occupied regions behaved like a gang of robbers, and courage and loyalty to its comrades were valued above all. Voroshilov and here deserved respect, participating on a par with everyone in equestrian attacks; in the saddle he was not so good, but he shot perfectly and gave commands in a thunderous voice.

“Kliment Efremovich, by nature hot, changed in the battle and became unusually cool. By the look of it, it seemed that he was not involved in the attack, where he could be killed, but as if in a sports competition.”

In March, 1921 of the year, at the head of the consolidated detachment of delegates of the Tenth Party Congress, went to suppress the Kronstadt insurgency ahead, without hiding from bullets. And miraculously remained intact: the losses among the storming (as usual under the command of Voroshilov) were enormous.

Tukhachevsky, the recognized leader of the army's progressives, spoke of Voroshilov: "Of course, he is very dubbed, but he has that positive quality that he does not climb into the wise men, and he readily agrees with everything."

Voroshilov agreed with Stalin, who demanded an early restructuring of the army. The new Commissar of Defense led the 15 army for years, during which mass production of weapons was established. If in the 1928, there were only 9 tanks in the Red Army, then in 1937 there were almost 17 thousands, more than in any other country in the world. The Pacific and Northern fleets were created at sea frontiers, the construction of torpedo boats and submarines began. Often they talk about the role of Tukhachevsky in the creation of airborne troops, but Voroshilov is no less merit in this. However, when Budyonny suggested that he jump with a parachute himself, the 50, the summer people's commissar, chose to refuse (Budyonny jumped, for which he was reprimanded by Stalin).

He agreed with the leader in 1937, signing as "a firing list" for thousands of compatriots as a member of the Politburo. And sanctioning the arrest of officers, never once stood up for someone. When it came to his longtime adversary Tukhachevsky and his colleagues, Kliment Efremovich brought out the resolution on the list: "Comrade Ezhov. Take all the scoundrels." In the letter, one of the "scoundrels", Jonah Yakir, assured Voroshilov of his innocence. He, who was friends with Yakir families, scribbled on the letter: "I doubt the honesty of a dishonest person."

He felt narko skin: a protest against repression and even insufficient zeal could make him the next victim.

It was rumored that when the Chekists came to arrest Catherine Davydovna, he with a gun in his hands forced them to retreat. In fact, the husband would meekly give his wife, as many of his associates did, but Stalin did not encroach on her. It seems he was convinced of the absolute loyalty of the "first marshal."

And it was not saved by the "small victorious war" with Finland, which turned into huge casualties. After the "debriefing" in May 1940, the post of Commissar of Defense was taken by Marshal Timoshenko.

In the war and after

On the Western Front, he was engaged in the usual business - inspired and punished. When neither one nor the other helped stop the onslaught of the Germans, the marshal was transferred to Leningrad. There, he still managed to detain the enemy and even organized a counteroffensive under the Soltsy, surrounding the tank corps of Manstein. Out of habit, a soldier walked in a line — with a gun on German tanks. But in this war the “cavalry” methods no longer worked. The Germans closed the blockade ring ...

But the diplomat from him turned out much better than a strategist. Voroshilov led difficult negotiations on a truce with Romania, Finland, Hungary - without knowing a single language, he easily found a common language with representatives of various countries. And he was completely at ease after Stalin's death, when, instead of faceless Shvernik, he was appointed Chairman of the Presidium of the Supreme Soviet. Formal head of state! In this position, he traveled the whole world, receiving many gifts - a pagoda of rock crystal from Mao Zedong, a carved elephant tusk from Ho Chi Minh, a golden cigarette case from Marshal Tito ...

And only in his old age, the over-cautious Voroshilov blundered, joining the "anti-party group" of Molotov and Kaganovich. I had to repent humiliatingly, and he was spared - perhaps because he was painfully worried about the recent death of Catherine Davydovna. She had cancer ("crustacean", she said), and the spouse spent long hours near her bed, sang her favorite songs, tried to cheer. Maybe it was only with her that he was sincere in his life ...

3 December 1969, Kliment Efremovich, died a little before 89 years. When he was accused of conformism, he invariably answered:

"I do not quarrel with anyone - I want to be buried in Red Square."
The dream came true: Twice the Hero of the Soviet Union, the Hero of Socialist Labor, the gentleman of more than 200 orders and medals from different countries rests near the Kremlin wall next to Budyonny, who briefly outlived him.