Project "ZZ". None of the two

April 27 2016
106
We can not allow the lady hawk, promoted by the generals, to sit on the throne in the White House. So many Americans who hate Hillary Clinton for her belligerence, stupidity, and “wow” think so. According to one of the polls, today many Americans would prefer a real presidential candidate of a fictional character from Game of Thrones. The Nation magazine declared the US national election system a “mess” and called for change. 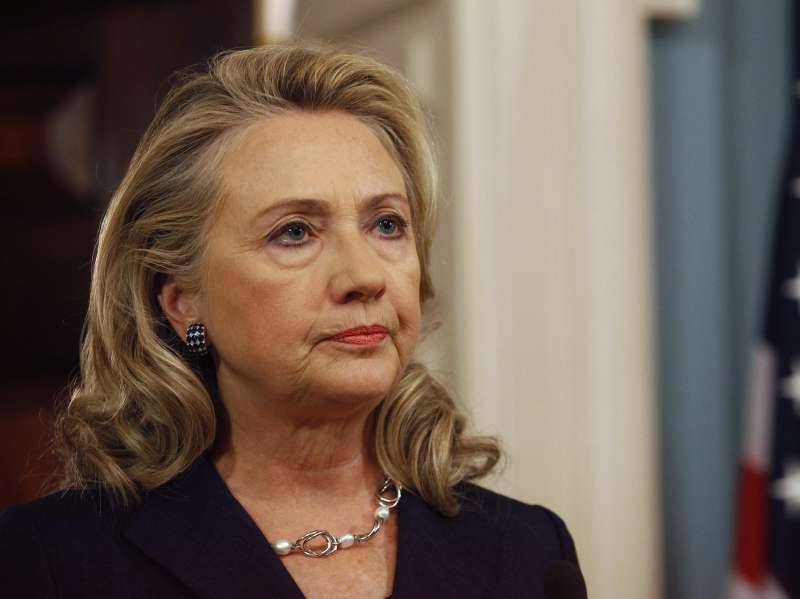 On the morning of April 27, it became known that the candidate for the presidency of the Republican Party, Donald Trump, won a preliminary vote in five states: Connecticut, Delaware, Maryland, Pennsylvania and Rhode Island. At the same democratic primaries in Delaware, Maryland, Connecticut and Pennsylvania, Hillary Clinton defeated (preliminary data). Her rival Vermont senator Bernie Sanders won only in Rhode Island, notes "Lenta.ru" with reference to CBS News.

Today, the outrageous billionaire Trump can count on 937 votes of congress delegates, and his main rival Ted Cruz - only on 555. Clinton can count on 2110 votes, and her rival Sanders only on 1255.

Presidential candidates will be formally nominated at the July party congresses.

However, with all the popularity in many states of Hillary Clinton and Donald Trump, many ordinary Americans are not eager to seat any of them on the throne in the White House. None of the two - so you can headline the survey, whose results were published recently on a major US portal Finance.townhall.com.

As it turned out from the SurveyMonkey poll, many American citizens would be happy if one of the characters in Game of Thrones became president of the United States.

Americans would prefer to vote not for Trump and not for Hillary Clinton, but for Tirion Lannister, who is Bes (see the histogram below). 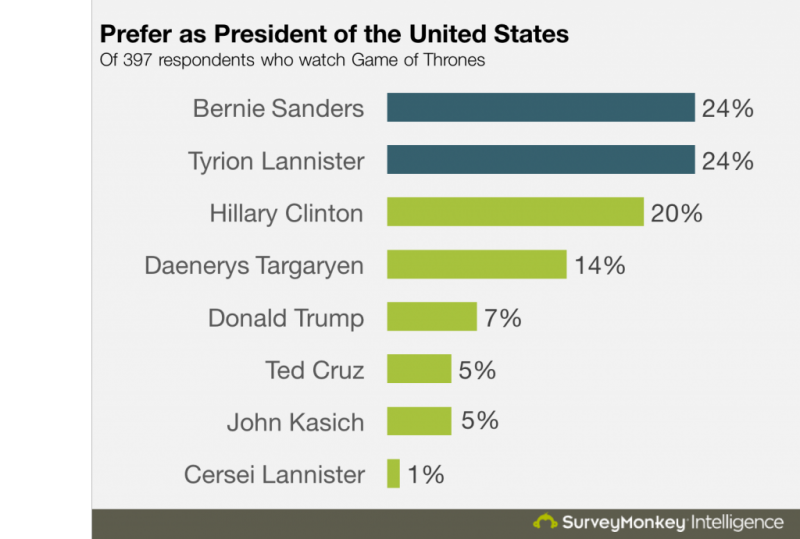 The survey showed that only Senator Bernie Sanders has approximately equal chances with Bes. Apparently, he, too, is suitable for the presidency of the United States. Hillary Clinton lags far behind both: she has only 20 percent of votes. Trump has 7% at all.

The fact that many of the respondents preferred the fictional character to real candidates was impressed by the researchers.

The American press notes that the elections in the United States have turned into something indescribable.

Journal "The Nation" Not only declared the US national election system a “mess”, but also called for change.

“What is happening?” - this was the question the editorial board asked. And this is what: during the presidential primaries, New Yorkers recorded something all over the state that was discussed before. Despite the state's “progressive” reputation, elections in New York have become a real mess. Changes are needed. And we must act immediately!

The publication reports that almost 120 thousands of people were inexplicably thrown out of the voting lists. Others were puzzled that their party affiliation suddenly and without their knowledge changed, and they could not vote in the closed primaries in New York.

The polling stations either did not open on time, or closed too early. And millions of people could not vote because they were not registered at all in the lists from either the Republicans or the Democrats. Here they themselves are to blame: they should have made their choice before October 9 2015, for 193 the day before the primaries.

As a result, the state has a "staggeringly low turnout": only 19,7% of voters participated in the primaries. The state of New York this season was in second place among the states with the lowest turnout. In the first place is Louisiana.

Even before this “catastrophe” that occurred on Tuesday, lawyers began to fight for the reform of the voting system. The journal supports a number of changes in the system of national elections so that every citizen can “participate in democratic processes”. The editors call on citizens to join the protest and support the law on empowering voters and other reforms that will make it easier for citizens to exercise their right to vote.

The author cited a number of unflattering epithets against Hillary's hawk, borrowed from major publications, including The New York Times. There is both “aggressive” and “tough” and “belligerent” and “pugnacious” and even “muscular” (not like Obama).

At the same time, Hillary is praised in the press for her "close relationship" with the generals. Well, still: Hillary is much more aggressive and inclined to defend the use of military force, rather than Obama. And for this, the generals love it. “They really love her!” Exclaims the expert.

Obviously, the author believes, with a victory in New York and with regard to the upcoming (“almost inevitable”) nomination as a Democratic candidate for the presidency, Hillary Clinton and her supporters decided that the time had come to “sharpen her beak and claws”.

No Bernie Sanders! The time has come for the “hawk”, which preempts any criticism from the Republicans, who are accustomed to accusing democrats of “softness” in matters of “defense”.

The author is indignant. But what about the wars unleashed by America in Iraq, Afghanistan, Libya and other countries? At least three trillion dollars, tens of thousands of dead and wounded soldiers, hundreds of thousands of foreigners killed, millions of refugees! For what?

"Hawk" Hillary wants more aggression and more cruelty. This is "reckless and stupid," says the publicist.

Hillary Clinton, like all other presidential candidates, recalls the historian, "never wore a military uniform." Her only daughter, married Chelsea, is healthy and lives in a posh apartment (priced at 10,5 million dollars) in New York. Like most American politicians in Congress, Hillary is a millionaire, and her children do not serve in the military. For this reason, there is no personal risk in military propaganda.

Henry Kissinger’s supporter, supporter of the Iraq war, self-styled “conqueror” of Gaddafi and Libya (“We came. We saw. He died. Wow”), ardent supporter of Bibi Netanyahu and Israel, Hillary Clinton is ready to fight.

“One thing is certain,” writes the analyst, “we have no right to say that we were not warned.”

Hardly the president of the United States will be Mr. Lannister, nicknamed Bes. But Hillary Clinton has every chance to open a new era of American wars. Not for nothing, even in the humorous survey “SurveyMonkey”, this lady fit into the top three, and the popular Trump was at the bottom of the list. After the great warrior Bush Jr., American generals and military industrialists will choose a new warrior for themselves - this time in a skirt and from the Democrats.

Actually, there is no difference, from a Democratic candidate or from the Republicans, in his pants or in a skirt. It is important that he was for the war.