Not seven, not eight

April 27 2016
28
In April, German Foreign Minister Frank-Walter Steinmeier called for the return of Russia to the G7 club, that is, for the G-7 to become the G8 again. True, Herr Steinmeier, in his usual diplomatic manner, immediately made a reservation: they say that in 2016 the conditions for returning to G8 "we do not yet have." Probably, the minister hinted that Europe is not going to remove the sanctions in 2016 year from Russia. 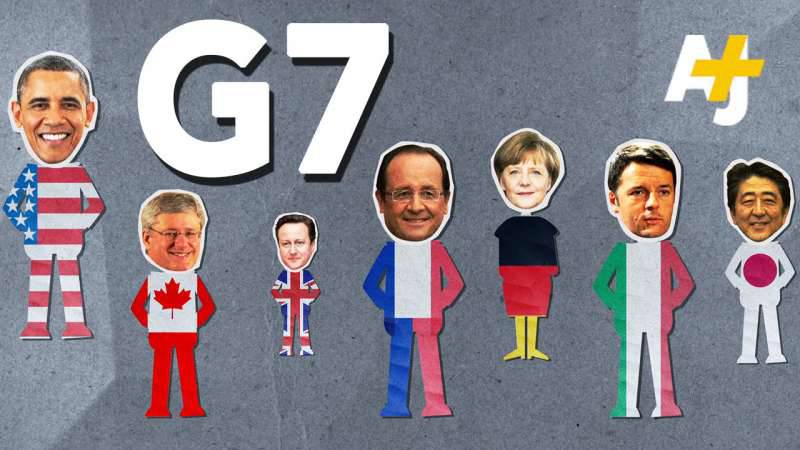 On the re-inclusion of Russia in the group of eight Herr Steinmeier said before, last year. In June 2015, he said that the West could not ignore Russia's violation of international law, but was not interested in “for G8 to become G7 forever”: The West needs Russia to resolve conflicts in the regions neighboring Europe.

The minister seems to have made it clear to Moscow that Russia will be good for the West, and at the same time for the club of eight only if it plays in accordance with “international law” - in other words, according to the rules invented by the West and interpreted in favor of the West and his satellites. What could have been possible for Kosovo is impossible for the Crimea, because the West "took care of the first", and the Kremlin made the decision about the second one, which wanted to be in Russia, and the Kremlin. Despite the referendum, such an outcome was immediately called “annexation”.

“I would like to wish that the G7 format does not remain for a long time, but that we create conditions for a return to G8,” said the German foreign minister on the eve of the meeting of the foreign ministers of the G7 countries in Hiroshima.

At the same time, according to Herr Steinmeier, in 2016, the conditions for returning to G8 “we don't have yet”.

The German Prime Minister called the need for her contribution to a political solution to the conflict in Ukraine and a long “constructive role” in a peaceful settlement in Syria to be the basic prerequisites for the return of Russia, notes Deutsche Welle.

Thus, over the past time, the position of Steinmeier (and Germany in general) with regard to the club of eight and Russia, as well as sanctions, has hardly changed.

By the way, he speaks about sanctions in a very streamlined manner, using the concepts of “dialogue” and the same “constructive cooperation”, but not a specific lifting of restrictive measures.

The other day, while giving an interview to Handelsblatt, Steinmeier expressed his attitude towards the policy of isolating Russia. He said that it is important for the West to resume the dialogue with Russia in order to resolve acute international issues. The Minister expressed negative attitudes towards isolation policies that have never helped resolve any problems. But there were many examples of constructive cooperation with Moscow, according to the head of the German Foreign Ministry, including on Iran’s nuclear program.

It seems that we are trying to add that Russia is trying to draw the club of eight into a circular orbit for use with specific political goals. Help, they say, to deal with us with the terrorists in Syria and other countries, help put an end to the chaos in Ukraine, and we will again take you to the club for this. True, the sanctions will not be removed anyway - until you return the Crimea.

Interestingly, Steinmeier understands that the terrorist organization Islamic State (banned in Russia) is partly a product of Western foreign policy, that is, Europe and the United States combined? Does Steinmeier remember how the Arab Spring was welcomed in Europe and in the USA? The minister knows how the “opposition” in Syria was supported in Europe and in the USA, as Mr. McCain was photographed on the Turkish border with the “democratic” bearded men? Or is Steinmeier not aware that Neosultan Erdogan from Turkey, with whom Europe is conspiring on the issue of refugees, welcomes IG? And does the Minister of Foreign Affairs really not understand that the “euromaidan” in Kiev is the fruit of the activity not of the “young democratic forces” of Ukraine, but of the State Department, and of the very same Germany, who at one time actively promoted Klitschko to the presidency of independence?

He knows, he knows everything, and he understands everything. But, like other politicians of the West, he wants Russia to clean up behind the spoiled West, as is remembered. And clothe his desire in neat diplomatic language, which is probably very appreciated by puppeteers across the ocean.

There was a Russian reaction to Steinmeier’s “April Theses”.

Russian Foreign Minister Sergei Lavrov noted that the crisis in Ukraine does not need to be discussed within the framework of the G7. He said this in an interview with the media in Mongolia, Japan and the PRC.

The “Seven” is not a mechanism that would even be recognized by someone else as a “platform” for discussing the Ukrainian crisis. The Ukrainian crisis needs to be discussed and resolved on the basis of the Minsk agreements of February 2015, ”he was quoted as saying. RIA News".

Earlier, in March, Sergey Lavrov noted that no one can expel anyone from G8, because this is an informal club, in which membership is not issued.

“The Eight is an informal club, no one writes out membership cards there, no one can expel anyone from there by definition,” said S. Lavrov at a press conference in The Hague.

“On the basis of the G20, all economic and financial issues are discussed in the G20, and the G8 retained its meaning of existence primarily because it was the forum of conversation of the leading Western countries and Russia,” the Foreign Minister was quoted as saying. "Vedomosti".

According to Lavrov, Russia does not cling to the G8 format. And "if Western partners believe that this format (G8) has become obsolete, then so be it."

The head of the presidium of the Council on Foreign and Defense Policy, Fedor Lukyanov, believes that the issue of Russia's membership in G7 is not relevant as it used to be.

"Then it was a club of elite Western states, and membership in it was a matter of prestige," said Lukyanov Gazeta.Ru.

According to the expert, today the format G20, in which Russia participates, is much more important. A member of the G-20 is China, which is not part of G7.

“In my opinion, there are no chances. "Against" the leading members of the "seven" - the United States and the United Kingdom. Japan, most likely, is also not “for”, not to mention Canada. I think Steinmeier understands this very well. But he is trying to preserve Germany’s status as an intermediary between Russia and the West, acting within the framework of the logic of “see which option we are offering you.” In addition, perhaps, Steinmeier probes us. If we said that it was interesting for us to return to the G8 and make some concessions, the G-7 would present us with a set of conditions.

But it must be understood: in any case, they will not take us back to the G8. Otherwise, it will look like a frank defeat of the Americans. "

But, according to the expert, now Russia has an alternative - the “twenty”. This is an opportunity to state that the "seven" in the presence of G20 is outdated. On the other hand, G20 is beneficial not only to Russia and China, but also to the United States, since, if the European countries dominated the old G7, the G20 Americans lost them.

“I think the G-7 will continue to operate: the Americans managed to restore the unity of this organization.” But I strongly doubt that this was our defeat because of the Crimea: the United States sought our exile from 2005, and sooner or later there would be an excuse for how to achieve this ... "

So, we note, Russia does not break at all in G7-G8, as some politicians in the European Union believe. And even more so, Russia is not going to participate in the "club" under any conditions that the western "partners" will immediately begin to put forward.

In essence, the proposals of Minister Steinmeier, which he compulsively repeats the second year, create another initiative, another additional institution, the participants of which could impose their “values” on Moscow and dictate terms.

It should also be understood that Germany is by no means independent in resolving major foreign policy issues: no matter how economically strong it is, politically it depends on the supranational will of the European Union, which, in turn, is tied to the will of the overseas hegemon.

Observed and commented on Oleg Chuvakin
- especially for topwar.ru
Ctrl Enter
Noticed oshЫbku Highlight text and press. Ctrl + Enter
We are
Situational analysis of the death of the MH17 flight (Malaysian Boeing 777), made on the basis of engineering analysis from 15.08.2014Memo to mercenaries in Africa
Military Reviewin Yandex News
Military Reviewin Google News
28 comments
Information
Dear reader, to leave comments on the publication, you must sign in.