They are all for Russia and against sanctions

April 26 2016
56
The other day, the famous director Emir Kusturitsa performed with a musical group in Paris - and began the concert with the Russian hymn. The people in the room stood up. Meanwhile, German Foreign Minister Frank-Walter Steinmeier expressed a sharply negative attitude towards the policy of isolating Russia. French Foreign Minister Jean-Marc Eyreau after a meeting with Vladimir Putin said that relations between France and Russia remain positive. Earlier, the French Minister of Economy Emmanuel Macron, who also visited Russia, mentioned the possible lifting of sanctions by the summer of 2016. Rising political star Marine Le Pen recently called the sanctions "absurd." The impossibility of automatically extending EU sanctions against Russia was announced by the heads of the diplomatic departments of Italy and Hungary. Canada is also ready to move closer to Russia. 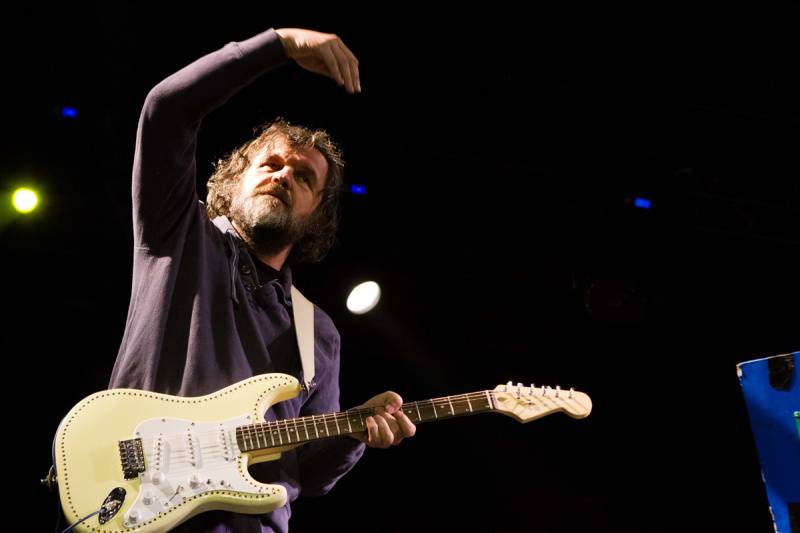 Directed by Emir Kusturitsa, winner of the two Golden Palm branches of the Cannes Film Festival, holder of the Legion of Honor, a foreign member of the Academy of Sciences and Arts of the Republika Srpska, recently spoke with his band The No Smoking Orchestra in Paris. The concert in the hall "Zenith" began with the Russian anthem. Many of those present rose.

Producer Kusturitsy Mirko Radenovich сказал: “It was a wonderful concert. Why did we decide to start with the anthem of Russia? It's beautiful, we like it. ”

At about the same time, German Foreign Minister Frank-Walter Steinmeier expressed a sharply negative attitude towards the policy of isolating Russia.

Giving an interview to the newspaper Handelsblatt, he stated that it is extremely important for the West to resume the dialogue with Russia in order to resolve pressing international issues. The Minister expressed a sharply negative attitude towards isolation policies that have never helped resolve any problems. But there were many examples of constructive cooperation with Moscow, according to the head of the German Foreign Ministry, including on Iran’s nuclear program.

The other day it became known about the statement of French Foreign Minister J.-M. Eyro. He stated that, despite the difficulties, relations between Russia and France remain positive.

“Despite all the difficulties that we are currently facing in the international sphere, relations between Russia and France remain positive, they have always been very intense in all areas,” сказал He is in a meeting with Russian Foreign Minister Sergey Lavrov.

Monsieur Eyro also met Putin; the Frenchman called it "very interesting and useful." According to him, France and Russia have developed a tight schedule of bilateral meetings: the Minister of Economy, Industry and Digital Technologies Emmanuel Macron will take part in the St. Petersburg Economic Forum, then the French Secretary of State for Foreign Trade and the Minister of Higher Education will visit Russia; besides, meetings of mayors of Moscow and Paris and other inter-regional meetings are scheduled. By the way, Monsieur Eyro conveyed to the Russian president the invitation of Francois Hollande to visit Paris (in October, 2016).

The previously mentioned French Minister of Economy, Industry and Digital Technologies, Emmanuel Macron, who also visited Russia, mentioned the possible lifting of sanctions by the summer of 2016.

In case of successful completion of the peace process in the east of Ukraine, Moscow can be exempted from sanctions. According to Monsieur Macron, the sanctions regime can be abandoned in the summer. “The goal to which we all strive is to achieve the lifting of sanctions next summer,” - said Emmanuel Macron, speaking in Moscow in front of French businessmen.

According to the leader of the National Front party, EU sanctions against Russia are absurd. She said this in an interview published recently by the Romanian newspaper Adevarul.

“Sanctions against Russia are absurd. I am for a multipolar world, - stressed Marin. - Each country should have the right to decide what relations it wants to maintain with other states. Everyone should be able to decide whether they want to cooperate with the United States, Russia or China. ”

Last month, the heads of diplomatic missions of Italy and Hungary statedthat the automatic extension of EU sanctions against Russia is impossible.

“We cannot take for granted any decision at this stage,” Italian Foreign Minister Paolo Gentiloni told the press after meeting with colleagues from EU member states in Brussels.

In turn, the Minister of Foreign Affairs of Hungary Peter Siyyarto said: “You can not decide on sanctions, preferring to remain silent about this issue. We believe that the issue of sanctions should be resolved at the highest level. This cannot be done automatically. ”

Recently, Canada also spoke in favor of restoring ties with Russia. Quite officially. This was reported on the pages of the Canadian edition of the international edition "The Huffington Post".

According to Dion, the current period is much worse than the Cold War: after all, Canada had negotiations with Russia even during the latter. “Canada talked to Russians even in the difficult times of the Cold War. And now we do not speak with them ... because of the policy of the former government, - Dion noted. - How does this help Ukraine? How does this help advance our interests in the Arctic? ”Under the previous government, Canada“ self-isolated, ”the politician concluded.

In parallel with these statements, dissatisfaction of Western citizens with their governments and their policies is growing. European citizens no longer trust the media. Particularly acute here is the question of information about migrants who flooded the European Union.

According to the survey "Sputnik. Opinions"conducted by Populus and Ifop, more than two-thirds of Germans (68%), France (67%), and about half of UK residents (46%) believe that the information provided by the media and authorities about migrant crimes is biased .

Least trust the authorities and the media citizens of France. Only 17% of the French believe that they are given objective information about crimes committed by migrants.

In Germany, the share of those who trust their media and government is higher - 25%.

In the UK, 36% of respondents trust the information provided on migrant crimes.

It can be stated: the inhabitants of the advanced countries of Europe (including Germany and Great Britain) stopped believing their governments and media. This is evidently due to the lack of objectivity, lies and annoying advertising of “common European values” against the background of the settlement of Europe by blacks and Arabs, among whom criminals and terrorists “came to the continent”. To dissatisfaction, the policy of the same Germany leads, whose Frau Chancellor insists on the policy of accepting migrants and on sanctions against Russia, which negatively affects the profits of German business.

At the same time, politicians in some European countries, as well as Canada, are aggressively seeking common ground with Russia. “Exacerbations” of the topic of economic sanctions and the possible lifting of them should be expected in June: at the end of this summer month, a meeting of the European Council will be held. Recall sectoral sanctions against Russia are valid until July 31 2016.